Bombardment of Waalhaven airfield, 10 May 1940

On Friday the 10th of May, 1940, the Dutch neutrality was ravaged when the German armies attacked the Low Countries. The Dutch army was insufficiently trained and equipped to counter the German invasion. Without help from outside it would be a battle without the slightest chance. This help from abroad did arrive. Not only from the French, who fought in the province of Noord-Brabant, but also from the British. The Royal Air Force supported the Dutch army in May 1940 by carrying out several operations. One of the raids was carried out on Waalhaven airfield by No.600 Squadron.

Waalhaven airfield was located in the current borough of IJsselmonde. It played an important part in the German Fall Gelb, the plans for the invasion of The Netherlands. All the airborne infantry and their equipment would land on this airfield, after the Dutch defense was disabled by a bombardment and the dropping of airborne troops. The German bombardment took place at four o'clock in the morning and buildings and defensive positions at the airfield were hit. An hour later German aircraft dropped over 500 paratroopers around the airfield, who attacked the Dutch troops in their defensive positions. Taking the airfield took longer than the Germans had anticipated. It wasn't captured yet when the first aircraft with airborne troops were attempting to land. Dutch troops succeeded in damaging or destroying some of the aircraft. By 6:30 AM the Germans finally controlled the airfield. Now they were able to bring in large numbers of troops and equipment unobstructed. The other airfields in the area (Ypenburg, Ockenburg and Valkenburg) were also captured, so there was no chance of a counterattack by the Dutch Air Force. Therefor the Dutch contacted London and requested for a bomb raid to be carried out on the airfields by the Royal Air Force.

The Royal Air Force headquarters (Bomber Command) appointed B-flight of No.600 'City of London' Squadron for the attack on Waalhaven airfield. B-flight was based at RAF Manston in Kent. Squadron Leader Jimmy Wells decided to lead the attack himself. Besides that he decided to leave all navigators at Manston, except for his own navigator, Sergeant John Davis. He had to direct all the aircraft of B-flight to Waalhaven airfield. The following aircraft and crews took part in the attack:

600 Squadron flew the Bristol Blenheim F1. This was originally a light fighter/bomber. At the outbreak of the Second World War it proved the Spitfires and Hurricanes did not have the range to operate over the mainland. Therefor the Bristol Blenheim was converted to a long distance fighter by equipping it with four .303 caliber machine guns. But in terms of speed, armament and agility it wasn't able to cope with the modern German Messerschmitts.

After having been briefed the six crews took off from RAF Manston at 10:30 AM. Although promised, there was no escort because of a misunderstanding. Nevertheless Squadron Leader Wells decided to get on with the mission. They set course to Rotterdam flying in two formations of three aircraft each. When they got Waalhaven airfield in their sights the Blenheims descended. Wells was the first to attack. Several German planes were hit. Pilot Officer Hayes: "I followed him (Wells) and picked out a Junkers-52 which I shot to pieces." Pilot Officer Haine also claimed he set fire to several German aircraft.

There was no chance for a second run over the target as the British were attacked themselves by twelve Messerschmitt Bf110 fighters of 3.ZG1 (Gruppe 3 of Zerstörergeschwader 1). What followed was an air battle in which it became clear that the Bristol Blenheim F1 was not able to cope with the German fighters. Besides that, they were outnumbered. The Blenheim of Moore and Isaacs was the first to be hit and crashed close to Waalhaven airfield. Both men were killed in the crash. The L1515 of Anderson and Hawkins was shot down closely afterwards and crashed at Spijkenisse. They also were killed in the crash. Squadron Leader Wells' machine crashed at the village of Pernis and Wells and Kidd were killed. However, Wells had been able to keep control over the aircraft long enough to give his navigator, Sergeant Davis, the opportunity to bale out. Rowe and Echlin's L1401 crashed at the village of Piershil. Soldiers of the Dutch garrison managed to get the unconscious Rowe out of the wreckage of his aircraft. He was taken to a hospital in Oud-Beijerland where he was taken Prisoner of War after the Dutch surrender on 14 May. The Blenheim flown by Haine and Hayes was attacked several times and was badly damaged. They were forced to make an emergency landing near the village of Herkingen. The two British airmen managed to evade capture and after three days they reached Hook of Holland. Davis had also made it to the village, which was occupied by British troops of the Harpoon Force. The three men made it back to England aboard H.M.S. Hereward. Queen Wilhelmina of The Netherlands was aboard this ship as well.

Only Pilot Officer Hayes managed to shake off the German fighters. He wanted to set course to England, but flew in the direction of Germany for a few minutes. Hayes: "this didn't seem great to me, so we changed our course westwards." He succeeded in bringing his L1514 back to Manston, but the aircraft was damaged beyond repair.

The seven airmen who were killed in the raid on Waalhaven airfield were buried by the Germans as unknown British airmen. Four of them got their final resting place on the Crooswijk general cemetery in Rotterdam, two of them on the general cemetery in Spijkenisse and one at the Roman Catholic cemetery in Piershil. During the eighties a historian from Barendrecht, called Hans Onderwater, started a research after the seven unknown airmen. As a result of his work the airmen were identified after more than 40 years and the headstones were replaced. Kidd, Isaacs, Moore and Wells are buried in Rotterdam. Anderson's and Hawkins' graves are in Spijkenisse and Echlin is buried in Piershil. Each year, personnel from 600 Squadron come to The Netherlands in May to pay their respect to the seven killed members of the squadron.

Bomber Command
RAF unit which controlled strategic and sometimes tactical bombing (as in Normandy)
caliber
The inner diameter of the barrel of a gun, measured at the muzzle. The length of the barrel is often indicated by the number of calibers. This means the barrel of the 15/24 cannon is 24 by 15 cm long.
infantry
Foot soldiers of a given army.
invasion
Armed incursion.
neutrality
Impartiality, absence of decided views, the state of not supporting or helping either side in a conflict.
paratroopers
Airborne Division. Military specialized in parachute landings.
RAF
Royal Air Force. British air force
raid
Fast military raid in enemy territory
Squadron
A military unit in the Belgian navy usually six to eight small ships operating together under one command. The smallest military unit in the Dutch air force of about 350 men. In most countries is the designation of a military unit thesize of a company. It is either an independent unit, such as a battery, or part of a bigger Calvary unit. In the air force it is the designation of a unit of aircrafts. 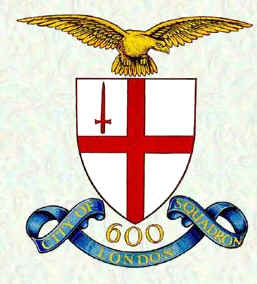 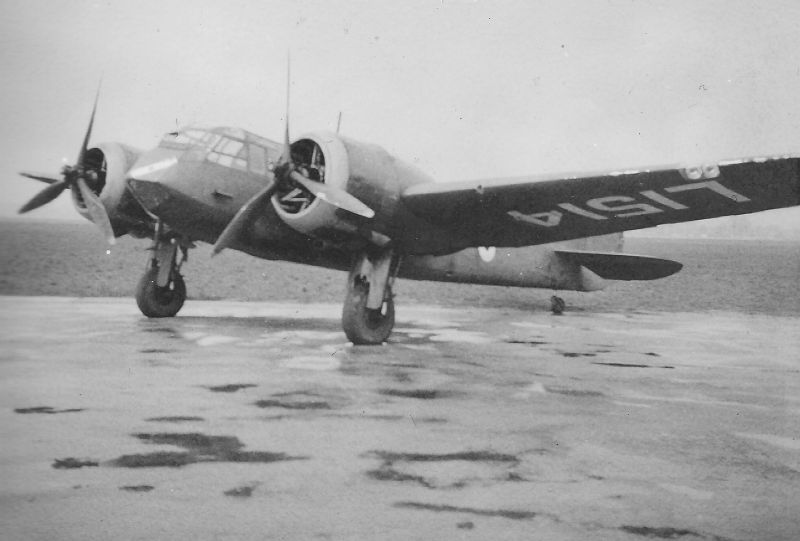 L1514, the only Blenheim out of six to return from the Waalhaven raid. Source: Martin Wheeley. 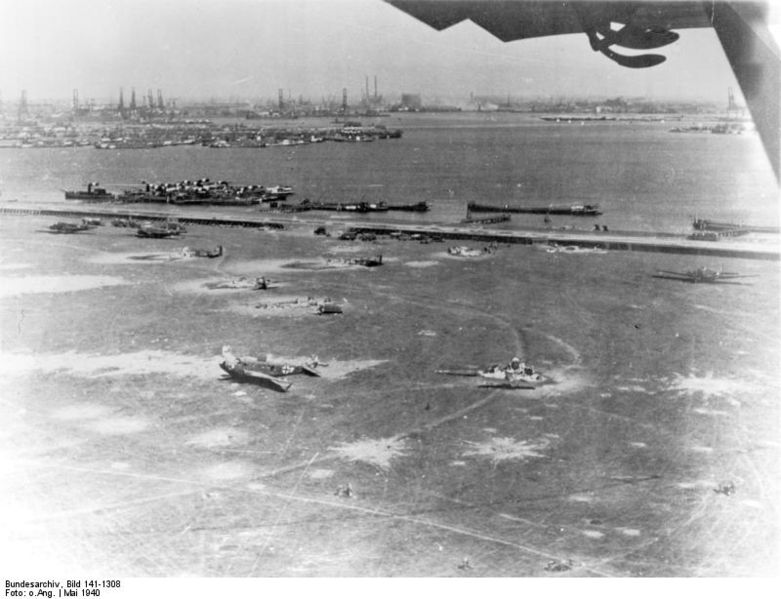 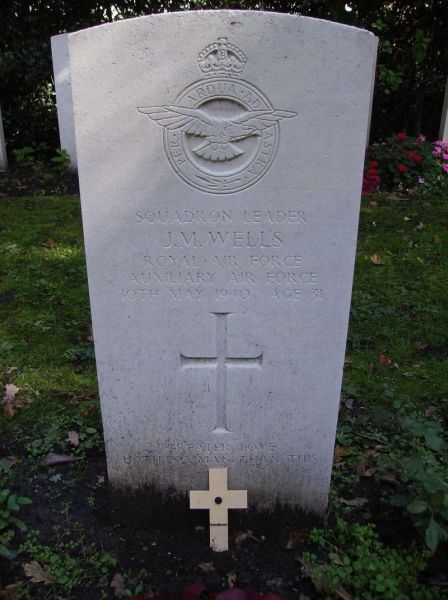 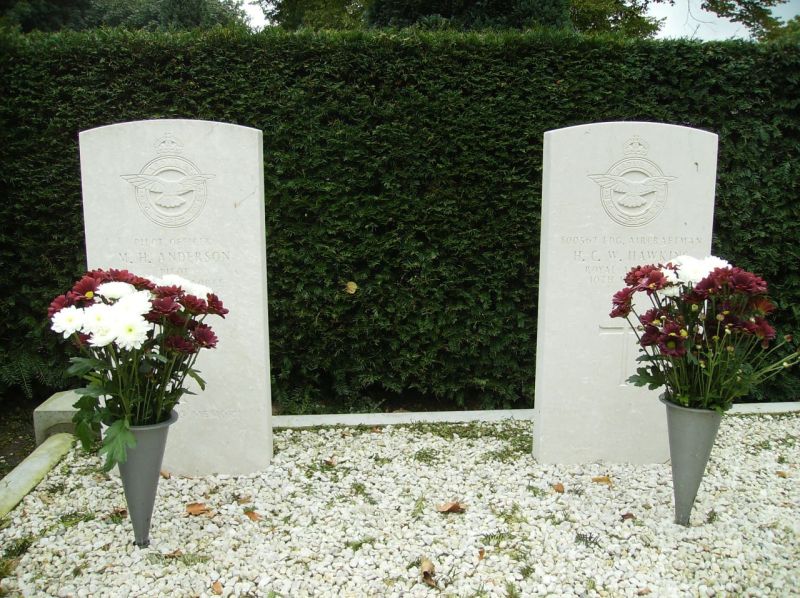 The graves of Anderson and Hawkins in Spijkenisse. Source: Pieter Schlebaum. 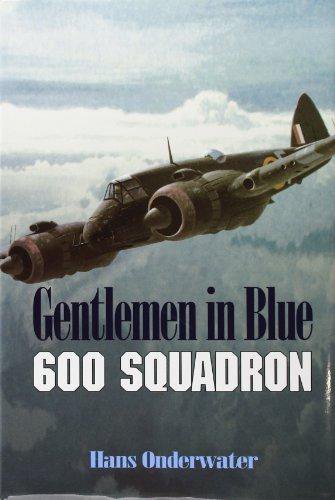