THE PRESIDENT: I call upon the Defendant Karl Dönitz.

KARL DÖNITZ (Defendant): I should like to say three things.
Firstly, you may judge the legality of German submarine warfare as your conscience dictates. I consider this form of warfare justified and have acted according to my conscience. I would have to do exactly the same all over again. My subordinates however, who carried out my orders, acted with complete confidence in me and without there being a shadow of a doubt about the necessity and legality of these orders. In my eyes no subsequent judgment can deprive them of their belief in the honorable character of a struggle for which they voluntarily made sacrifice after sacrifice up to the last hour.
Secondly, there has been much talk here about a conspiracy which is alleged to have existed among the defendants. I consider this allegation a political dogma. As such it cannot be proved, but can only be believed or rejected. Considerable portions of the German people will never believe however, that such a conspiracy could have been the cause of their misfortune. Let politicians and jurists argue about it; they will only make it harder for the German people to draw a lesson from this Trial, which is of decisive importance for its attitude toward the past and the shaping of its future, the acknowledgement that the Führer principle as a political principle is wrong. In the military leadership of all armies in this world, the Führer principle has proved itself in the best possible way. On the strength of this experience I considered it also right with regard to political leadership; particularly in the case of a nation in the hopeless position in which the German people found itself in 1932. The great successes of the new government and a feeling of happiness such as the entire nation had never known before seemed to prove it right. But if, in spite of all the idealism, all the decency, and all the devotion of the great majority of the German people, no other result has been achieved through the Führer principle, in the last analysis, then the misfortune of this people, then this principle as such must be wrong, wrong because apparently human nature is not in a position to use the power of this principle for good, without falling victim to the temptations of this power.
Thirdly, my life was devoted to my profession and thereby to the service of the German people. As the last Commander-in-Chief of the German Navy and as the last Head of the State, I bear the responsibility towards the German people for everything which I have done and left undone.

Führer
German word for leader. During his reign of power Adolf Hitler was Führer of Nazi Germany. 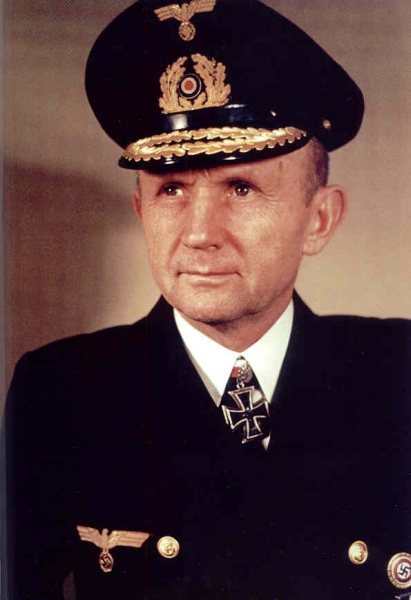