The "Kriegsabzeichen für die Marineartillerie" (War medal for Naval Artillery) was instituted by Grossadmiral Erich Raeder, June 24th, 1941, in order to award land-based personell of the Kriegsmarine and to emphasize their important task at the same time. They operated the shorebatteries and anti-aircraft batteries along the coast, forming the first line of defense against attacks from the sea and from the air.
The medal was designed by Otto Plazeck from Berlin and has been produced by various manufacturers. The medal consists of a wreath made up of 8 sets of 2 oak leaves each with a knotted ribbon at the bottom. The top of the medal shows an eagle with folded wings, holding a small swastika in its claws. The central motive is a heavy calibre gun, deployed in the dunes and trained upward to the left. In the background, on both sides of the barrel, some waves ar visible, emphasizing that this is a medal exclusively awarded to land-based personell of the Kriegsmarine. The wreath and the eagle are gilded and the central motive is coloured a dark-grey. The reverse of the medal is flat with a round needle or a broad flat pin mounted on it.
The medal was initially produced from nickel but later during the war also from zinc or a zinc alloy. If the medal is marked with the logo or the LDO code of the manufacturer, then this is engraved on the reverse of the medal. To prevent damage during combat, a textile version to be worn on the battleuniform was produced. Some well known manufacturers are C. Schwerin & Sons from Berlin, C.E. Juncker from Berlin, Rudolf Souval from Vienna, Heinrich Wander from Gablonz and Friedrich Linden from Lüdenscheid.
The medal was presented in a small box or a standard paper bag with the name of the decoration stamped on it. A standard citation was presented with the decoration and conferment was noted in the Soldbuch. The medal was worn on the lower left breastpocket below the Iron Cross 1.
To become eligible for this award, the following requirements had to be met:
- having shown extraordinary leadership within the guncrew,
- any action showing exceptionally courageous conduct not meriting any other award,
- in case the recipient was wounded or killed in action against the enemy,
- as soon as any member of the guncrew had earned 8 points.
Crews of searchlights and listeningposts were also eligble for the medal and for them, each discovery of a hostile aircraft equalled half a point.
The following system was set up for guncrews:
- Downing of a hostile aircraft without the help of another gun, 2 points,
- downing of a hostile aircraft with the help of another gun, 1 point. 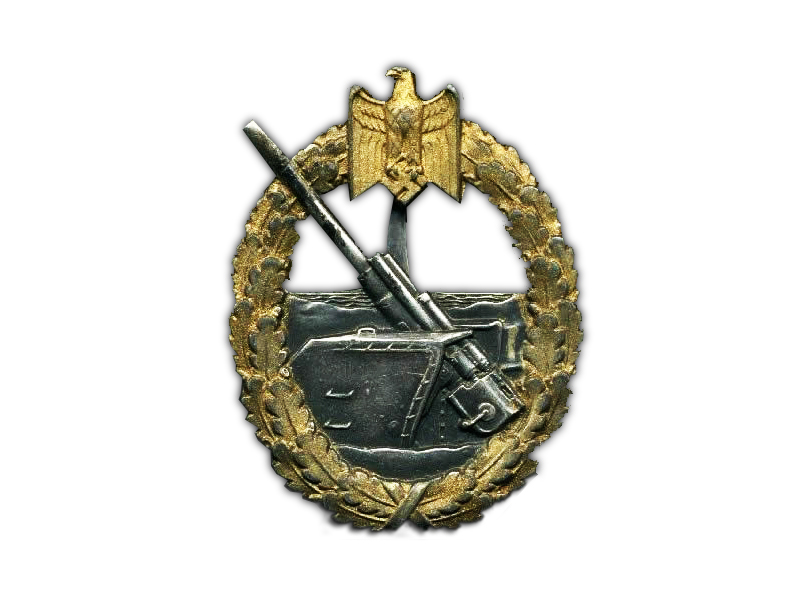