The Medal Za Odre, Nyse i Baltyk (Medal "for the Oder, the Neisse and the Baltic region battles") was instituted on October 26th 1945 by the Krajowa Rada Narodowa (Council of State PNR) to award those who directly participated in combat against the German Army for the release of Poland and the restoration of its old boundaries on the rivers the Oder, the Neisse and the coast of Baltic sea.
The decoration was awarded to all soldiers and citizens, who took part in combat on Oder, Neisse and Baltic Sea in the period from March and April 1945. The borders of Poland on the Oder (bed), Neisse (Nisse-Luzhitskoy) and Baltic sea were reestablished by the Potsdam conference in 1945.
Also awarded were the defenders of Polish coast during the defensive war in September 1939 and foreign citizens that had in any degree participated in re-establishing the Polish borders. A total of 321975 medals were awarded.

The bronze round medal measures 33 mm in diameter. A small eagle placed at the top of the medal, holds a roll in its claws with on it an image of the map of Poland, with its main rivers and the citys Warsaw (W), Gdansk (G), Shchetsina (S) and Vrotslava (W). The map is framed by narrow border. Around the map is the inscription: "ZA ODRE - NYSE - BALTYK" (for Oder, Neisse, Baltic).
On the obverse there is the inscription: "RP-ZWYCIEZCOM-III.1945-IV.1945" (to the victors) in underlined words .
There is a second version of medal, which differs from the first in terms of the fact that on the front side of the medal on the map there are no designations of the main Polish cities.
The ribbon is 35 mm and dark blue with two longitudinal stripes of white-blue along the sides. Width of longitudinal stripes is 4 mm. 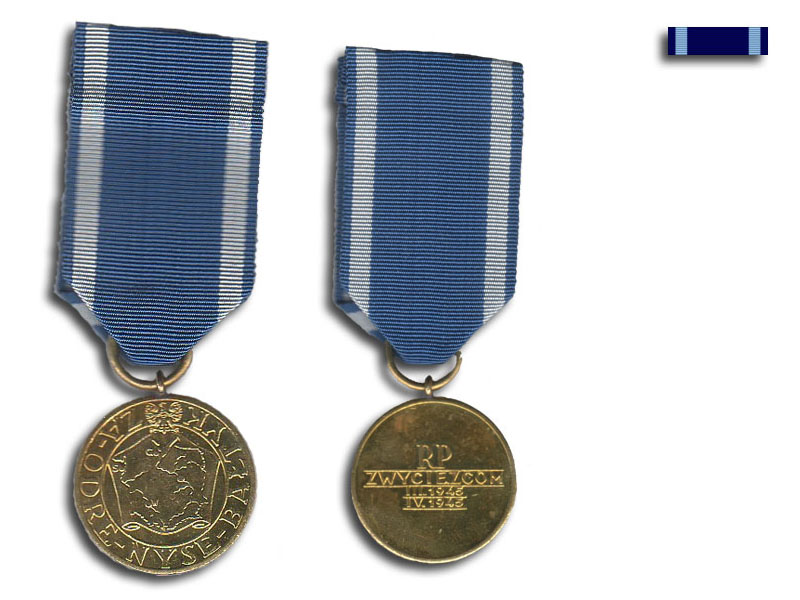