Medal for War Services South-Africa
This medal was awarded to persons who, during the period 6 September 1939 to 15 February 1946, for a minimum aggregate period of two years, one at least of which should have been a continuous period, rendered voluntary and unpaid service in one or more of the organizations, associations, institutions or other approved bodies, e.g. Civilian Protective Services, Civic Guards, Red Cross of South Africa, etc. Persons who served in the Union Defence Forces, or part-time Military Units, did not qualify for this award. The medal is in silver, with the arms of South Africa on the obverse, while inside the circumference of the reverse are the words FOR WAR SERVICES SOUTH AFRICA . VIR OORLOG DIENSTE SUID-AFRIKA. the inscription forms a complete circle, inside which are interleaved protea flowers with the date "1939-1945" in the centre. Ribbon is 32mm wide and divided into three equal parts of orange, white and blue. King's Commendation for Valuable Services denoted by bronze protea emblem. (The protea is the national flower of South-Africa.) 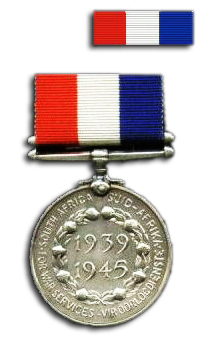