This Order, the highest national Order of the USSR, was established by Decree of the Central Executive Committee of the Soviet Union dated April 6th, 1930. It can be awarded not only to persons, including members of the Soviet Armed Forces for remarkable services and recipients of the titles 'Hero of the Soviet Union' and 'Hero of Socialist Labour' but also to institutions and other social organisations of the Soviet Union as well as to factories, cities and republics. In 1935, Nikita Khrushchev was the 110th person to receive the Order for his supervision during the construction of the Moscow Metro (Underground).
The badge consists of a circular portrait of Lenin with a wreath of ears of rye around it. The left side of the wreath depicts a red star and a hammer and sickle is placed at the bottom of the wreath. Along the right side is the Red Flag with Lenin's name on it.
The ribbon is 0.9" (24 mm) wide and coloured red, at either edge are two vertical yellow stripes, each .05" (1.5 mm) wide and divided by a red stripe of equal width.

Eventually, the decoration was made of silver. This so called Type 1, the "Traktor" was made since 1930. In September 1934 the Red Star and Soviet Flag were added to the decoration. This Type 2 was made of 650 proof Gold. The stamped decoration was fitted with a silver soldered screw-post and plate. Under the screw on the back the serial number was stamped. Early 1935 a new type, Type 3, was introduced made of silver instead of gold. This version was issued until junie 1936.
The first type that was also issued in World War Two was Type 4, stamped out of platinum, with a screwback. This was the last version with a screw on the back and was issued until Juni 1943. From June 1943 the decoration was introduced suspended from a hanger. This Type 5 can be recognised by the markings on the back where originally the screw would have been placed. After World War 2 the plate was changed so that the place of the screw is no longer recognisable. 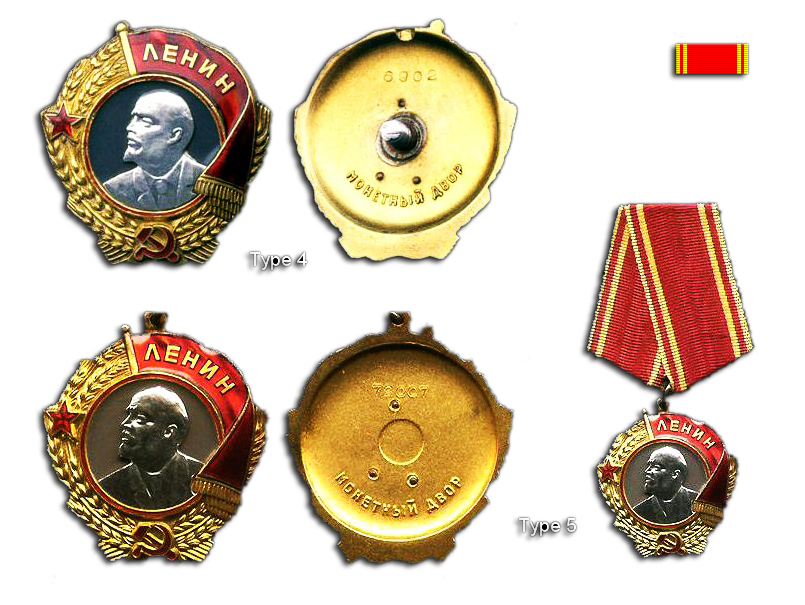