Helmut Lent achieved 105 night victories (among which were 61 four engined bombers) and 8 daytime victories in 396 Nachtjagd and 111 Zerstörer sorties.

Awarded after 8 day and 14 night victories.

A night fighter squadron under the leadership of Hauptmann Lent and Oberleutnant Prince zu Lippe-Weißenfeld scored their 100th aerial victory when warding off an attack of British bombers on the Reich on the night of 27 January.

Awarding 3/44 directly by the Führer and Oberbefehlshaber der Wehrmacht.

Hauptmann Lent achieved his 30th nocturnal aerial victory in the night to 16 May.

Oberstleutnant Lent, commodore of a night fight wing, shot down his 100th adversary in the night from 15 to 16 June.

Reported additionally to the Wehrmachtbericht:
Geschwaderkommodore Oberstleutnant Helmut Lent, recipient of the highest German medal of bravery, found a flier's death. With him the Luftwaffe loses their most successful night fighter, who in combat against the British nocturnal terror attacks achieved 102 aerial victories. 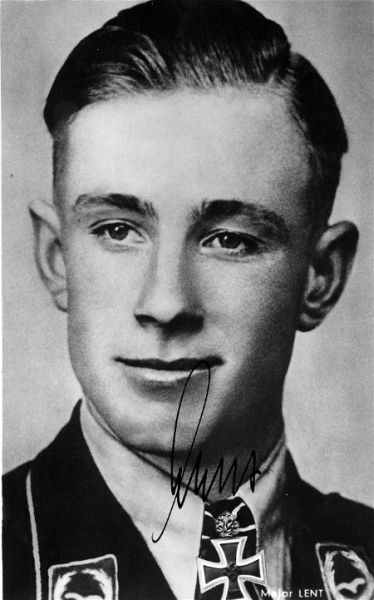