SS-Sturmbannführer Hansen has highly distinguished himself in the campaigns in Poland, the West, the Balkans and Russia (1941/42 and 1942/43).

By the 11.03.1943 Kampfgruppe Witt had thrusted through PolewajaDertgatschiPscherkaskaja-Losswaja, the ultimate aim being to move along the BelgorodKharkov road in order to strike Kharkov from the north. On the 10.03.1943 Hansen and his Bataillon captured Dertgatschi in a bitter house-to-house fight and furthermore captured the village of Ssekeniki in the twilight of the same day. A morning attack on the 11.03.1943 along both sides of the march route by a reinforced Bataillon of Kampfgruppe Witt came under heavy defensive fire to the north and west of Bypredem and bogged down. Kampfgruppe Hansen, deployed to take control of the district of Schatiliwka to the west of here, succeeded in penetrating past the southern edge of Bypredem after a ferocious urban battle.

Later on the same day, SS-Sturmbannführer Hansen made the independent decision to move against the northern edge of Kharkovs city centre. At 12:00 on this day he and his men reached the so-called Red Square (or Square of the Wehrmacht) after hard fighting through houses and streets. Fierce enemy counterattacks from the south and southeast were repulsed with bloody losses for the enemy. After leaving behind a small security force at the Red Square (or Square of the Wehrmacht), SS-Sturmbannführer took the bulk of his Bataillon along the road to Belgorod on his own initiative to permit the bulk of the Regiment to enter Kharkov. With its commander at the spearhead, the Bataillon succeeded in capturing an extremely strong roadblock at the northern edge of Kharkov and removing it.

Through the decisiveness and personal example of SS-Sturmbannführer Hansen, and the élan of his troops in the tough urban combat, the way for the bulk of the Regiment into the inner part of Kharkov was opened up, and the capture of the northern part of the city was ensured. Having personally participated in the close combat, SS-Sturmbannführer Hansen was wounded here for the fourth time by a shell splinter in his face.

On the 12.03.1943 the northern part of Kharkov was finally cleared 0f the enemy and declared secure following hard and costly fighting. Here as well SS-Sturmbannführer Hansen further distinguished himself through his personal example of courage and bravery.

The establishment of contact between both Kampfgruppen in the area just south of the Red Square (or Square of the Wehrmacht) laid the groundwork for the continuation of the battle within the city centre and eastern part of Kharkov.

Awarded for his outstanding combat and command achievements during the Ardennes offensive and in the battles near Lake Balaton in Hungary. 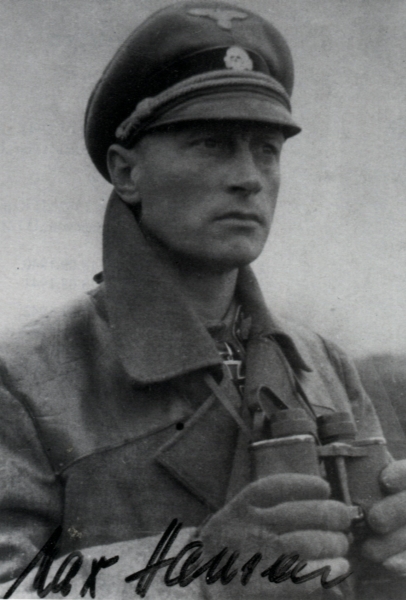