The following press article describes Karchers wartime achievements, which presumably formed the basis of his reception of the Knights Cross

Oberleutnant zur See Karcher, born on the 03.01.1918 in Remscheid as the son of a secondary-school teacher, has in operations off the English south and southeast coast sunk a total of 10 enemy merchant ships with 29500 GRT, all from heavily escorted convoys. Furthermore he participated in the sinking of another large ship with 600 GRT and also torpedoed a freighter with 4000 GRT. He conducted numerous successful minelaying operations and repeatedly operated under the fire of English coastal batteries. Without ever losing sight of the overall situation, he mastered such dangerous moments with ruthlessness and calm. Karcher is a dashing S-Boat captain, who has carried out his tasks with toughness and decisiveness and led his boat and crew consistently to new victories with never-waning readiness for battle.

In the first days of the invasion he penetrated into an enemy beachhead in the Seine bay, sunk an unloading dock and was heavily wounded during an engagement with an English motor gunboat. 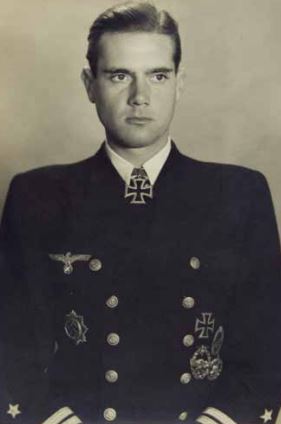