Was promoted to Generalmajor on 1st April 1945.

Awarded the Knight's Cross for the following actions.

1. Starting on the 21.01.1944, Warrelmann's Regiment was positioned in the middle of the 23. Infanterie-Division's sector, but lost the town of Bliny two days later. Warrelmann assembled a scratch counterattack force consisting of parts of the regimental Pionierzug and 10 men of his regimental headquarters. They counterattacked the Soviet spearhead south of Ilyushkino and were able to stabilize the situation.

2. His Regiment's success in the battles near Lake Beloje (south of Idriza and northwest of Newel). Following the Soviet capture of Hill 173.1, Warrelmann led a counterattack from the front of one of his Bataillone with armour support, and was able to retake the position. Every subsequent Soviet attempt to wrest control of the hill, supported by heavy artillery and tanks, was repulsed. By holding this key position Warrelmann ensured the security of the main German line. 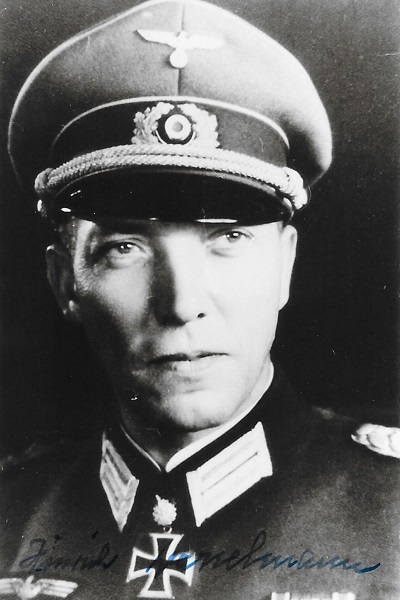