On the 07.04.1945 the enemy attacked the sector of Grenadier-Regiment 209 (located southwest of Wiekau, Samland) with strong infantry forces and 33 tanks. One group attacked out of the Wiekau area with 16 tanks and a battalion of infantry. Its objective was to break through the eastern flank of the Regiment, clear the road to Prilacken and get into the rear of the entire regimental front. The 6./G.R. 209 blocked the Wiekau-Prilacken road, and it let the enemy tanks approach closely whilst separating their escorting infantry from them with sniper and MG fire. The enemy tanks pressed forward even so, and they tried to shoot up the men in the trenches with concentrated fire. Then Feldwebel Bremermann jumped out of his coverless trench, destroyed both lead tanks with Panzerfausts and subsequently beat back the oncoming infantry with his Zug.

The enemy suspended their assault. On the next day the enemy once again attacked the now totally encircled 6./G.R. 209 from 3 sides with 350 men and 7 tanks. Feldwebel Bremermann destroyed 2 tanks with Panzerfausts. However the enemy entered into the friendly trenches from the rear. In response Bremermann rallied the remnants of his Zug, led them in a successful counterthrust following hard close combat, threw the enemy out of the trenches and once again brought the position firmly under friendly control. 80 enemy dead lay in and in front of the trenches. On both of these days Bremermann destroyed 4 tanks via Panzerfausts, and along with his Zug he killed 130 counted enemy infantry.

By these actions the enemy thrust against Prilacken and the rolling up of the entire regimental front was rendered impossible.


The nomination by his unit was received on 19-4-1945. The Heerespersonalamt (HPAArmy Staff Office) did not create an internal nomination request. The existing file card in the German Archives is not contemporary, this card states: "nominated on 20-4-1945, forwarded by Major Joachim Domaschk on 28 April yes". The book "Verliehene Ritterkreuze" (Awarded Knight Crosses) states approval by Domaschk "Knight's Cross yes". No further evidence of the presentation can be found. According to the Association of Knight's Cross Recipients (OdR) the award was presented in accordance with the Dönitz-decree. This is illegal according to the Deutsche Dienststelle (WASt) and lacks legal justification. The presentation date was assigned by Walther-Peer Fellgiebel. Bremermann was a member of the OdR. 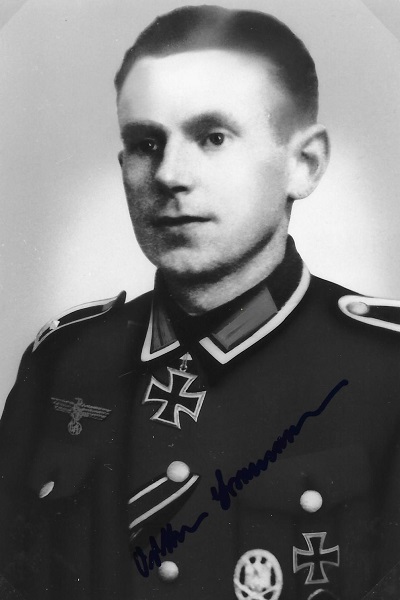