Citation:
"For extraordinary heroism in the line of his profession as Commanding Officer of the U.S.S. Gudgeon (SS-211), on the First War Patrol of that submarine during the period 13 December 1941 to 29 January 1942, off the coast of Kyushu in Japanese home waters. While in enemy waters, Lieutenant Commander Grenfell successfully attacked and sank a ship of 5,000 tons. Later, when due to return to his base at Pearl Harbor, and having received information that the Midway Islands had been attacked by enemy submarines, Lieutenant Commander Grenfell set his course with the object in view of intercepting these submarines. He encountered a Japanese submarine on the surface, attacked it with three torpedoes, severely damaging the enemy submarine. His patrol was completed without damage to his submarine or injury to personnel of his command. His conduct throughout was an inspiration to his officers and men and in keeping with the highest traditions of the United States Naval Service."

Citation:
"For conspicuous gallantry and intrepidity in action as Commanding Officer of a United States Submarine on patrol in enemy Japanese-controlled waters. Skillfully maneuvering his ship into striking position, Commander Grenfell attacked the enemy with aggressive determination and outstanding courage and succeeded in sinking or damaging an important amount of Japanese shipping. Despite strong hostile countermeasures, he evaded the enemy by his prompt and expert tactics, finally bringing his vessel safely into port. His superb leadership and daring devotion to duty were in keeping with the highest traditions of the United States Naval Service."

Received for exceptionally meritorious conduct in the performance of outstanding services to the Government of the United States during World War II.

Citation:
"For exceptionally meritorious conduct in the performance of outstanding services to the Government of the United States as strategic planning officer on the staff of Commander, Submarine Force, Pacific Fleet from 12 December 1942 to 17 August 1944. Captain Grenfell contributed materially to the success of our submarine operations in enemy waters which resulted in very severe damage to the enemy."

Second LoM awarded in the form of a golden star to be worn on the ribbon of the first LoM.
Bureau of Naval Personnel Information Bulletin No. 335 (February 1945).

Citation:
"For exceptionally meritorious and distinguished service in a position of great responsibility to the Government of the United States during the period August 1960 to September 1964, as Commander Submarine Force, United States Atlantic Fleet, and advisor for Polaris operations to the Commander in Chief Atlantic. Exercising outstanding professional skill and resourcefulness, Vice Admiral Grenfell was eminently successful in carrying out his responsibilities throughout this period. As a result of his sound judgment and superior planning ability, Atlantic Fleet Submarines conducted operations of inestimable value to the United States in the Atlantic, Arctic, and Indian Oceans and in the Mediterranean Sea. His dynamic and infusive leadership resulted in the development of highly trained crews to man the scientifically sophisticated Polaris submarines which were maintained at an unprecedented degree of readiness, thus making an extremely important contribution to the nuclear deterrent posture of the United States. During a period in which personnel strength of the Submarine Force, United States Atlantic Fleet, expanded threefold, Vice Admiral Grenfell succeeded in maintaining the traditional esprit de corps and professional competence of his command in spite of rapid expansion, change in composition, and diversity in the nature of the operations involved. His inspiring leadership, keen foresight and untiring devotion to duty throughout, reflect the highest credit upon himself and upon the United States Naval Service." 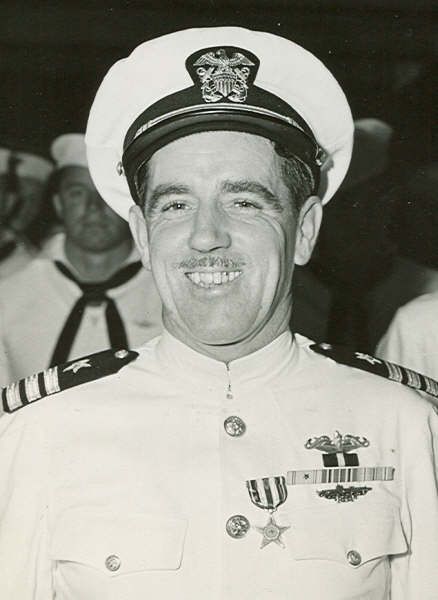