On his own initiative, Oberleutnant von Cossel achieved a deed possible only through his extraordinary bravery and outstanding leadership qualities. The swift capture of Staryj Bychoff (on the Dnieper river) on the 04.07.1941 was an important local success that also brought about a great advantage for the whole Korps.

During the course of the fighting around Orel and Ssewsk he distinguished himself again in such a way that he would later be awarded the German Cross in Gold on the 05.05.1943. This Panzer commander, known throughout his Division for his boldness and determination, was employed in the area south of Orel with his Abteilung at the start of the major offensive there. He and his Abteilung penetrated deep into the enemy defensive system, and by doing so he simultaneously secured another Panzer-Division against a hostile enemy armoured attack already being launched into its flank. In his sector he and his Abteilung made the farthest southward advance, and they went on to hold their conquered positions all on their own. A few days later he rallied all available infantry forces on his own initiative and thereafter led these with such skill against the enemy that an important hill was taken with both minimal friendly casualties and extremely high enemy losses. Some time later, in the midst of a critical situation, he deployed his Abteilung to secure friendly columns against enemy armour. He then swiftly decided to go over from a retreat movement to an attack of his own which threw the enemy back. In the fighting which followed he captured a village and held it until relief arrived. A few days later it was once again his Abteilung that prevented a Soviet breakthrough. He died a heros death as he was giving orders for a counterthrust. However his Abteilung was nonetheless able to achieve a total success while carrying out his final orders. 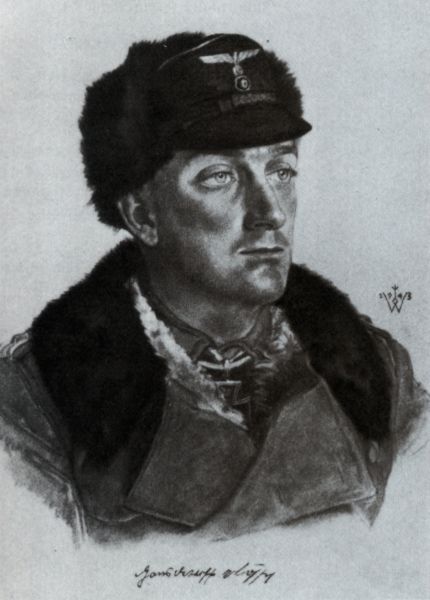