Frederick Hughes joined Cambridge University Air Squadron whilst a Law undergraduate at Pembroke College and was called up on the outbreak of war in September 1939. Having attended the first war course at Cranwell, he completed his flying training at the School of Army Co-operation before being posted to No 26 Squadron. However, the need for more fighter pilots during the Battle of Britain led to him volunteering and he was posted to No 264 Squadron flying the new Defiant. Surviving the disastrous daylight operations of the Defiants, he went on to become a successful night fighter pilot. On 11 August 1943 he and his Radar Operator, Laurie Dixon, managing to destroy three Ju88's during one sortie. In 1944, he was appointed to command No 604 squadron operating as part of the Allied Expeditionary Air Force and again he took Laurie Dixon with him as his Radar Operator. By the end of the war he had been credited with 18 confirmed victories, one shared, one damaged. On 2nd April, 1946, he was appointed to permanent commission in the rank of Flight Lieutenant.
In 1954, Hughes was on the Directing Staff at RAF Staff College, Bracknell, and became PSO to Chief of the Air Staff. In 1959 he was Officer Commanding RAF Geilenkirchen.
Hugh's appointments during the 1960s were: Staff Officer, Department of the CAS on 22nd August, 196, and Director of Air Staff Plans on 21st January, 1963. On 30th September, 1963, he was appointed ADC to The Queen. He went to AOA, HQ Flying Training Command on 12th September, 1966, and on 1st October, 1968 became the AOC, No 18 Group/Air Officer, Scotland and Northern Ireland.
After two years as senior air staff officer at the Near East Air Force headquarters in Cyprus, Hughes retired on 6th June, 1974
probable and one damaged.
In 1982, he was made Honorary Air Commodore of No 2503 Squadron, Royal Auxiliary Air Force Regiment and in 1983, became Deputy Lieutenant of Lincoln.

Citation:
"Flying Officer Hughes and Sergeant Gash, as Pilot and air gunner respectively, have participated in many engagements against the enemy, both by day and night. During these flights four enemy aircraft have been destroyed, of which two were shot down at night."

Citation:
"Squadron Leader Hughes is a brilliant night fighter whose determined efforts have met with further successes. Since being awarded a bar to the Distinguished Flying Cross he has destroyed 7 enemy aircraft. His total victories number at least 16, of which 13 have been destroyed at night. Squadron Leader Hughes is a highly efficient flight commander and his meritorious work has been reflected in the efforts of his flight which has earned notable successes."

Citation:
"Wing Commander Hughes has displayed the highest standard of devotion to duty throughout a long period of operational flying. His outstanding keenness, great skill and unsurpassed determination have been well reflected in the success of the squadron which, under his brilliant leadership, has been responsible for the destruction of a good number of enemy aircraft. Among his own personal successes, Wing Commander Hughes has destroyed 18 enemy aircraft."

With "FRANCE AND GERMANY" clasp 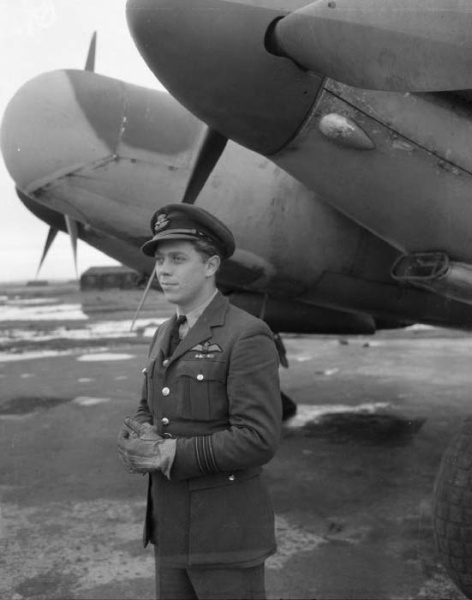