Guards lieutenant. Hero of the Soviet Union. Died in a car accident.

"Guards Lieutenant Dorofeyev's detachment broke into the village of Volya-Magnushevska. The Germans put much resistance and threw in tanks backed by submachine-gunners. Dorofeyev's platoon operated effective and clean. Not stepping a single step back, our soldiers's intense fire cut off the submachine gunners from the tanks. Left without infantry cover , the enemy tanks dit not dare to continue the offensive. The attack was repulsed. The Hitlerits lost up to 25 people. Our soldiers repelled two counterattacks of superior enemy forces." 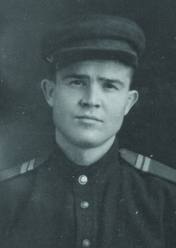