Citation:
"In Burma on 24th and 25th June 1944, after fierce fighting, the enemy, with greatly superior forces had captured two posts known as "Water Piquet" and "Mortar Bluff". These posts were well sighted and were mutually supporting and their possession by the enemy threatened our communications.
On the morning of 26th June 1944, a Company of the 5th Royal Gurkha Rifles ( Frontier Force ) was ordered to recapture these positions. After a preliminary artillery concentration, the Company went into the attack but on reaching a false crest about 80 yards from its objective, it was pinned down by heavy and accurate fire from a machine-gun in "Mortar Bluff" and a 37 millimetre gun in the jungle, suffering many casualties.

Naik Agansing Rai, appreciating that more delay would inevitably result in heavier casualties, at once led his section under withering fire directly at the machine-gun and, firing as he went, charged the position, himself killing three of the crew of four. Inspired by this cool act of bravery the section surged forward across the bullet swept ground and routed the whole garrison of "Mortar Bluff." This position was now under intense fire from the 37-millimetre gun in the jungle and from "Water Piquet". Naik Agansing Rai at once advanced towards the gun, his section without hesitation following their gallant leader.

Intense fire reduced the section to three men before half the distance had been covered but they pressed on to their objective. Arriving at close range, Naik Agansing Rai killed three of the crew and his men killed the other two. The party then returned to "Mortar Bluff" where the rest of their platoon were forming up for the final assault on "Water Piquet".

In the subsequent advance heavy machine-gun fire and showers of grenades from an isolated bunker position caused further casualties. Once more, with indomitable courage, Naik Agansing Rai, covered by his Bren gunner, advanced alone with a grenade in one hand and his Thompson Sub-Machine gun in the other. Through devastating fire he reached the enemy position and with his grenade and bursts from his Thompson Sub-Machine gun killed all four occupants of the bunker. The enemy, demoralized by this N.C.O�s calm display of courage and complete contempt for danger, now fled before the onslaught on "Water Piquet" and this position too was captured.

Naik Agansing Rai's magnificent display of initiative, outstanding bravery and gallant leadership, so inspired the rest of the Company that, in spite of heavy casualties, the result of this important action was never in doubt."

Details:
Agansing Rai was invested with his Victoria Cross from the Viceroy of India, Field Marshal Lord Wavell in Peshawar, India, on the 23rd January 1945.
Later promoted to the rank of Hon. Lieutenant.
Agansing Rai, cremated Dharan on 31 May 2000. 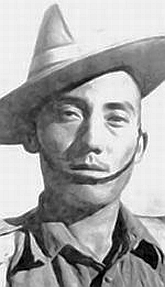