On the 03.10.1943 the Soviets attacked the sector of the I./Grenadier-Regiment 287 (commanded by Major Lorenz) with their reinforced 53rd Shock Brigade. Up until the 15.10.1943 the Bataillon fended off all attacks near Lesno and Selenzy. Major Lorenz fought everywhere to ensure his men won their battles. On the night of 03-04.10.1943 he personally led an assault team in order to relieve the strongpoint Salzburg (NE of Lesno). On the 06.10.1943 the Soviets launched a renewed attack against the whole sector of the Bataillon. A penetration near Lesno was sealed off, while 3. Kompanie held its position at the Handtuchwald (east of Selenzy). Ultimately only the strongpoint Straßburg was given up completely on the 09.10.1943.

Lorenz would be decorated with the Knights Cross for conducting a largely successful defense of this area over such a prolonged time.

In March 1944 the Soviets created a bridgehead on the south bank of the Bozek river, near Tereschewzy. This posed a great threat to the important German crossing over the Bug at Proskurov, and so it had to be dealt with. On the 12.03.1944 Lorenz and his Grenadier-Regiment 287 were dispatched to cover the east flank of Tiranowka. The Regiment simultaneously provided security for the assembly area of elements of the 6., 19. and 2. SS Panzer divisions, which were assembling to attack the bridgehead.

The Soviets managed to infiltrate this assembly area during a night attack. In response Oberstleutnant Lorenz personally launched a counterattack with his Pionierzug, entering into close combat with the foe. He managed to throw them into confusion and enable further counterattacks against them. His Regiment would eventually push the Soviets back over the high ground east of Tiranowka and hold them here until the planned German armoured attack advanced through their positions the next morning.

Lorenz would be decorated with the Oakleaves for averting an emergent crisis and protecting the assembly of the Panzers. 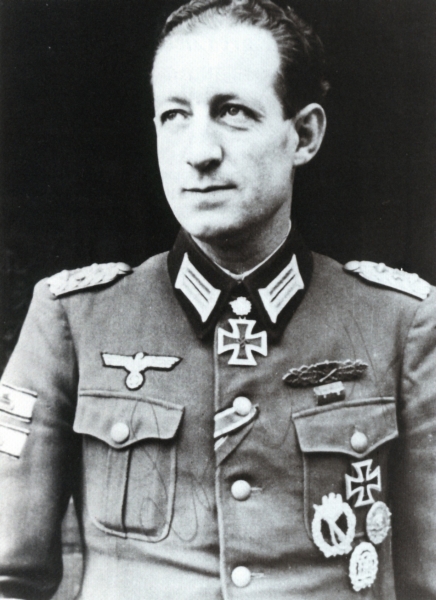