Early on the 26.06.1944 Hauptmann Ostermeier (at the time attached to the Division as a training officer) received command of a Kampfgruppe consisting of the Divisions Feldersatz-Bataillon plus some subordinated alarm units. With these men he defended positions north of Mogilev up until the afternoon of the following day, in the process repulsing several strong enemy attacks and denying the Russians approach to the city and its road. By doing so he enabled significant numbers of friendly troops to escape towards the west, and thus already demonstrated a considerable degree of bravery at this initial stage.

In the early morning hours of the 29.06.1944 Hauptmann Ostermeier reached the town of Poplawy (located 8 km west of Beresino). Here his orders from the Division were to gather up any friendly stragglers which happened to pass through. But eventually, following a heavy artillery barrage, the Russians launched a surprise attack against the southern part of Poplawy with strong infantry forces of their own on the afternoon of the 30.06.1944. This forced the friendly motorized elements in the area to pull out of Poplawy and towards the west in order to ensure that only the bare minimum of forces remained in Poplawy. Taking up a weapon of his own, Hauptmann Ostermeier launched a counterthrust using both these remnant forces as well as elements of other retreating friendly formations in the vicinity. The counterthrust struck those enemy troops that had already entered into Poplawy, and in the fighting which followed they were completely ejected from the village. The Russians suffered heavy losses in the process, including about 200 dead. This was all accomplished with the support of just a single self-propelled 10.5 cm gun.

The repulse of these Russian troops enabled the road BeresinoTscherwen to be held for an entire day, which in turn enabled it to be utilized as a retreat route for friendly formations that were retreating towards the west. This would not have been possible without the initiative that was displayed here by Hauptmann Ostermeier alone. Without his undying energy and devotion to duty it would not have even been possible to create a Kampfgruppe out of such a motley collection of units (some of which had only just been in full retreat mode). And the attack itself would surely not have succeeded without the inspiring example of Hauptmann Ostermeier himself in the foremost line of battle.

Following this action Hauptmann Ostermeier would go on to defend the villages of Marianowka and Gertsch until his collection of hastily-assembled units were totally smashed. After that he then took charge of a few men and fought through partisan-controlled territory until he reached the city of Minsk, where he established contact with the remnants of the Division.

The conduct and achievements of Hauptmann Ostermeier during this period are all the more commendable when one considers that direction from the higher commands was extremely limited in the relevant time and place.

The awarding of the DKiG is still unclear. Several sources give different data. According to the older source of Veit Scherzer the award data was set on xx.xx.1945, F. Berger gives 26th March 1945 and the 4th edition of Dörr gives 6th March 1945. Several other sources state this last date. The 2001 edition of Patzwall/Scherzer does not list him.

Awarded for the leadership of his battalion during the bitter offensive and defensive battles of the Fallschirm-Panzergrenadier-Division 2 Hermann Göring between Konradswalde and Wesselhofen, beginning on the 13.03.1945. 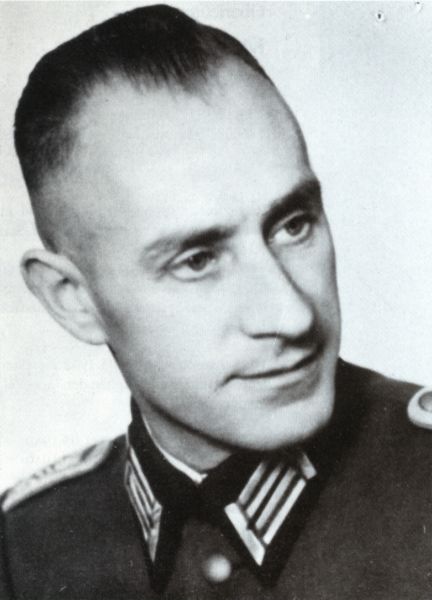