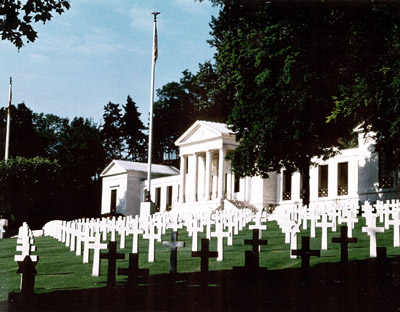 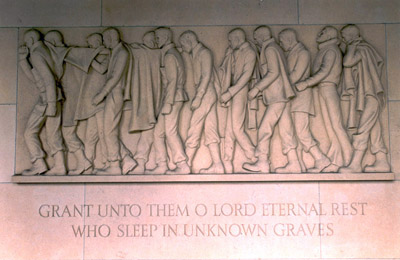 Originally a World War I cemetery, the Suresnes American Cemetery and Memorial just outside Paris, France now shelters the remains of U.S. dead of both wars.

The 7.5-acre cemetery contains the remains of 1,541 Americans who died in World War I and 24 Unknown dead of World War II. Bronze tablets on the walls of the chapel record the names of 974 World War I missing. Rosettes mark the names of those since recovered and identified.

The World War I memorial chapel was enlarged by the addition of two loggias dedicated to the dead of World Wars I and II, respectively. In the rooms at the ends of the loggias are white marble figures in memory of those who lost their lives in the two wars. Inscribed on the loggia walls is a summary of the loss of life in our armed forces in each war, together with the location of the overseas commemorative cemeteries where our war dead are buried.