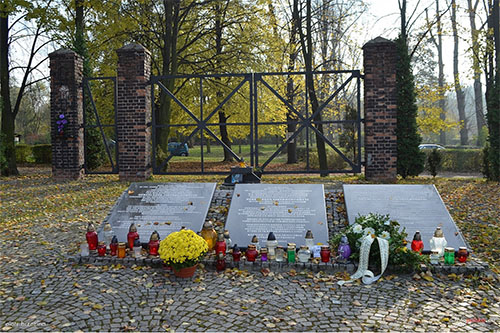 Camp Eintrachthütte was a satellite camp of Auschwitz concentration camp and existed from 26 May 1943 to 23 January 1945. There were about 1400 inmates in the camp.

After the liberation, the camp was re-used as internment camp by the Polish secret service and renamed to Zgoda. There were about 5000 inmates and torture took place at a large scale. In total, at least 1855 inmates died. The commander, Salomon Morel, fled in 1994 to Israel when the Polish government wanted to arrest him for war crimes and crimes agaist humanity. Israel refused to extradite him and he died in Tel-Aviv in 2007.

Of the camp, the entrance gate remained. It is now a memorial. There are also some other remains.