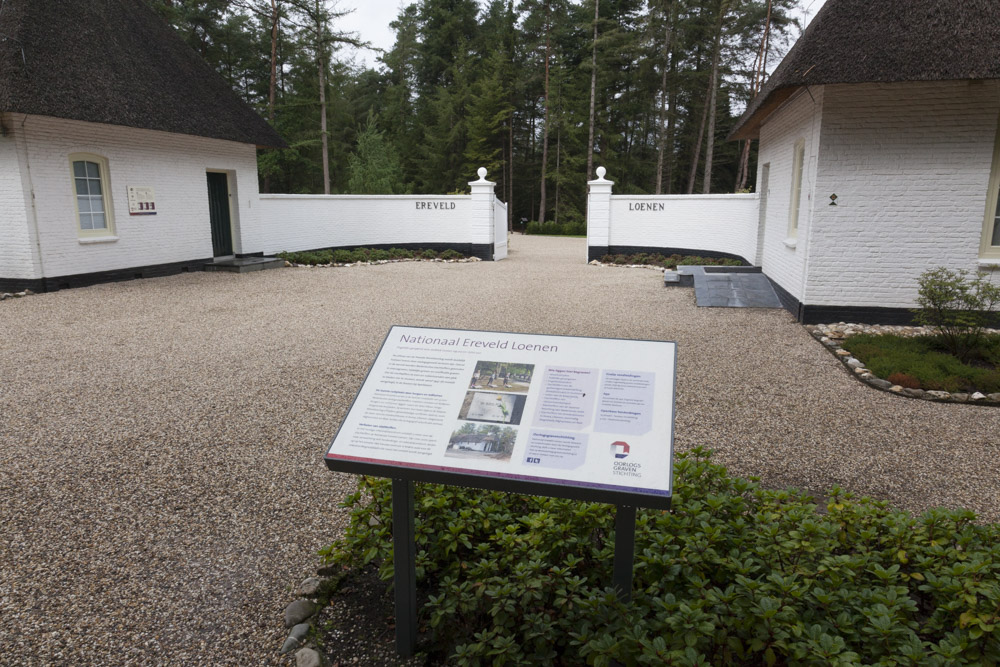 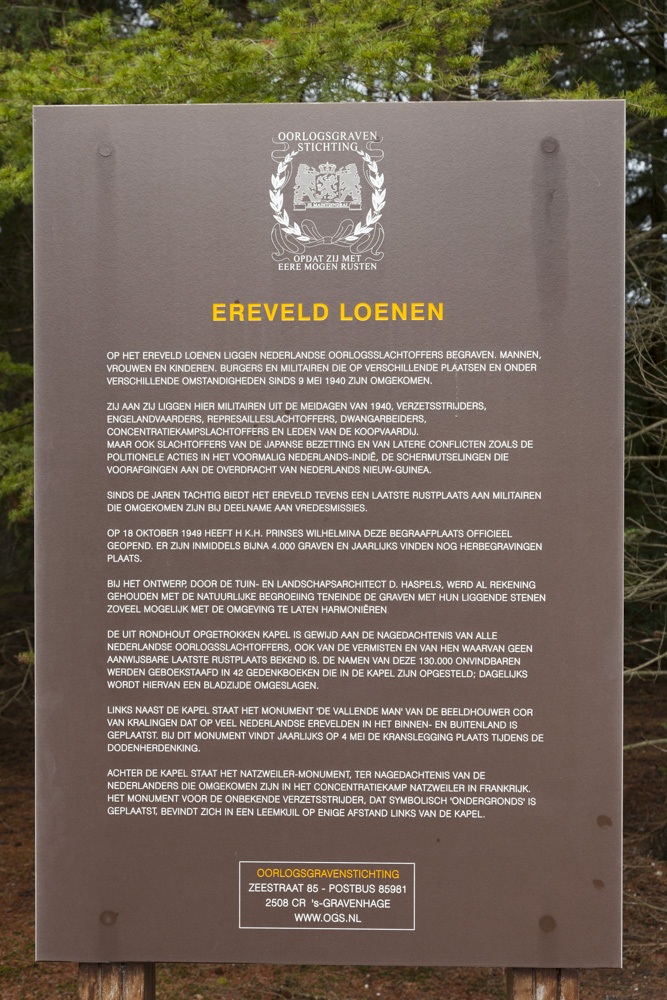 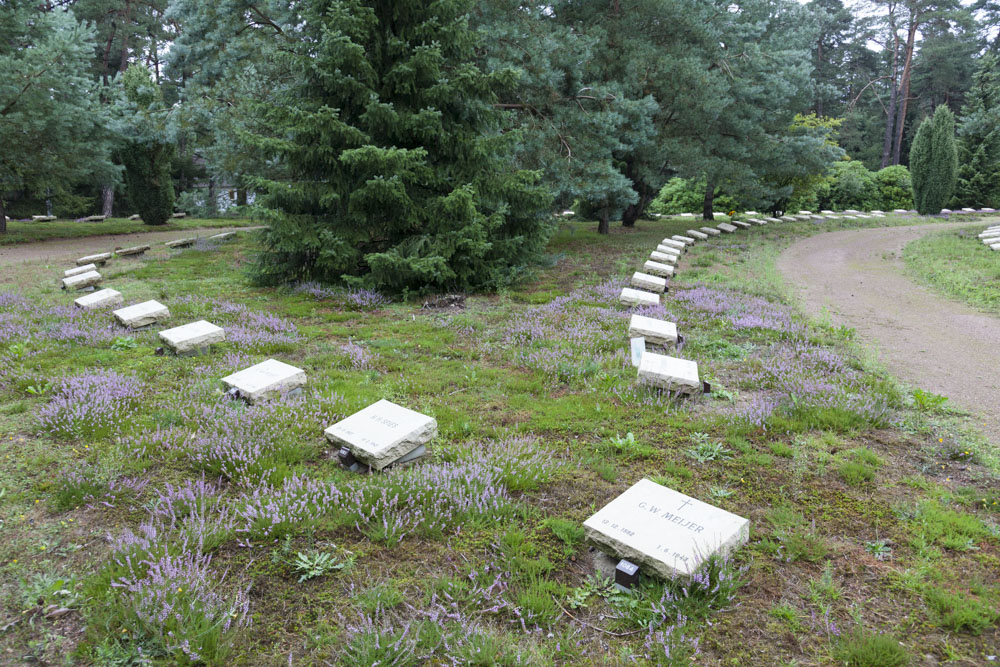 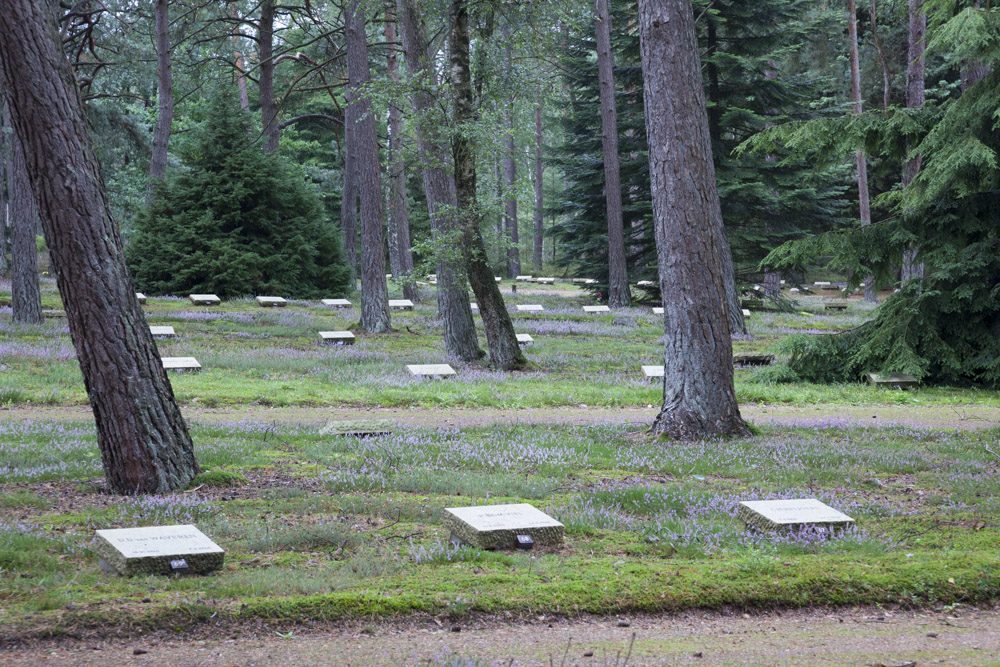 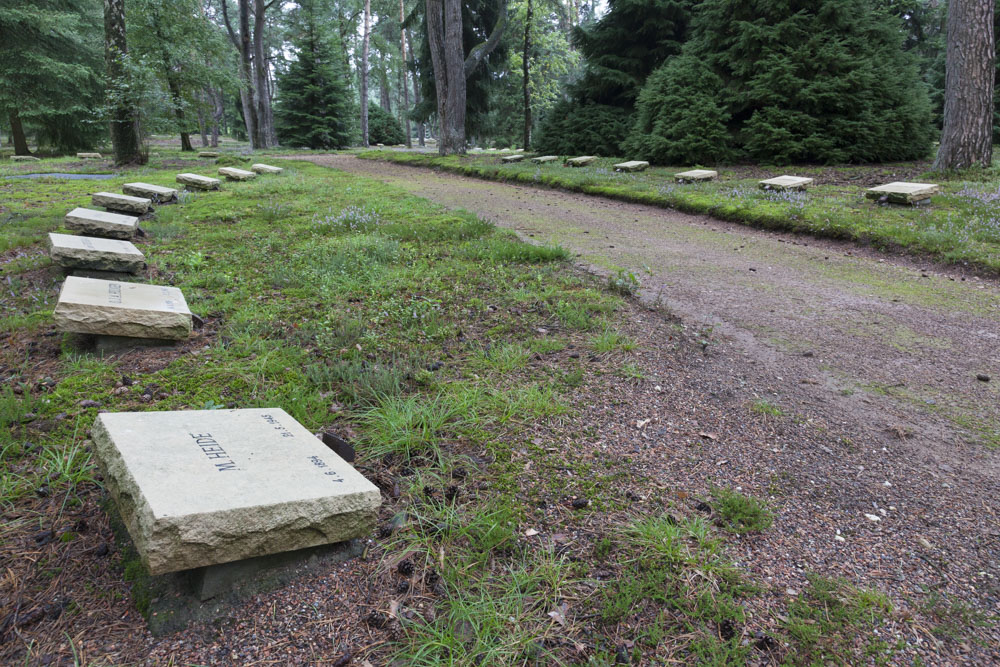 In 1947 the Dutch Government decided to repatriate the remains of the Dutchmen that had succumbed in Germany during the Second World War. These victims were resting in enemy soil and often had been deprived of a decent funeral.

In order to be able to carry out this decision, the Oorlogsgraven Stichting (the Foundation for Wargraves) started in 1948 with the establishment of a field of honor in the village of Loenen (municipality of Apeldoorn).
On 18 October, 1949 HRH Queen Wilhelmina opened the field of honour where today over 3.600 Dutch have been buried. Still nowadays reburials take place here regularly.

An important characteristic of the field of honour Loenen is formed by its design. The graves have been almost inconspicuously placed in a wooded area with a total surface of 17 hectares (42 acres) Here you will find no straight lines with crosses but graves adorned with flat laid tombstones. Behind every epitaph a particular history is hidden. The field of honour Loenen provides a good picture of the variation of victims of the Second World War. Between them you will find killed soldiers but also many civilians: members of the Resistance, political prisoners, "Engelandvaarders" (those who escaped to the UK during the occupation) as well as victims of forced labor in Germany (Arbeitseinsatz).

Centrally on the field of honour there is a chapel with a shrine for the Memorial Books, the plaque on the wall with the names of the "Engelandvaarders" and some urns with ashes from concentration camps. On the left, beside the chapel there is a monument called "the tumbling man" by the sculptor Cor van Kralingen.

From the 80s the field of honor is not exclusively the resting place for victims of the Second World War. Also soldiers and civilians that lost their lives during the actions in New Guinea and the so called humanitarian and Peace Corps missions are being (re)buried here: 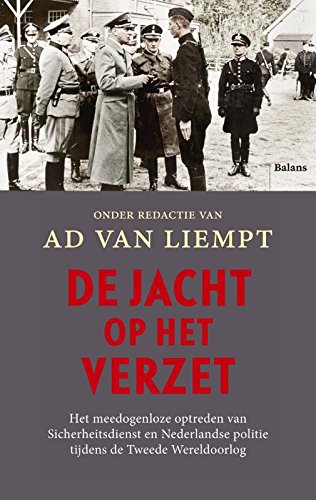 Almost 80 years after he was arrested and disappeared during World War II, the remains of resistance fighter Cornelis Pieter Kreukniet have been identified. The DNA of a second cousin has determined that the remains that were excavated in 1947 from an anonymous grave on the Waalsdorpervlakte are Kreukniet, the Ministry of Defense reported on Saturday. 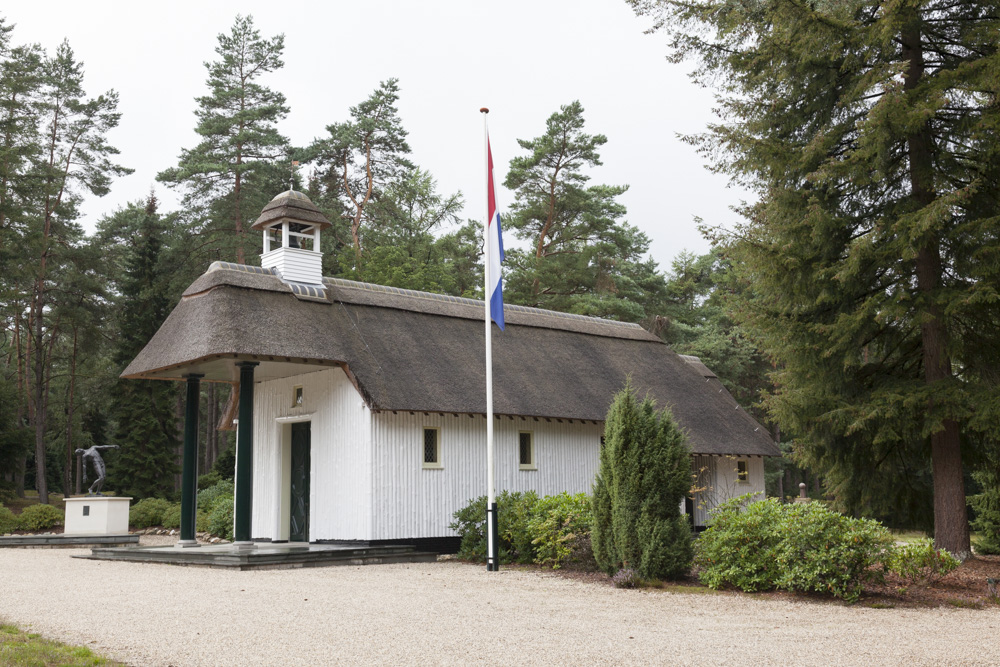 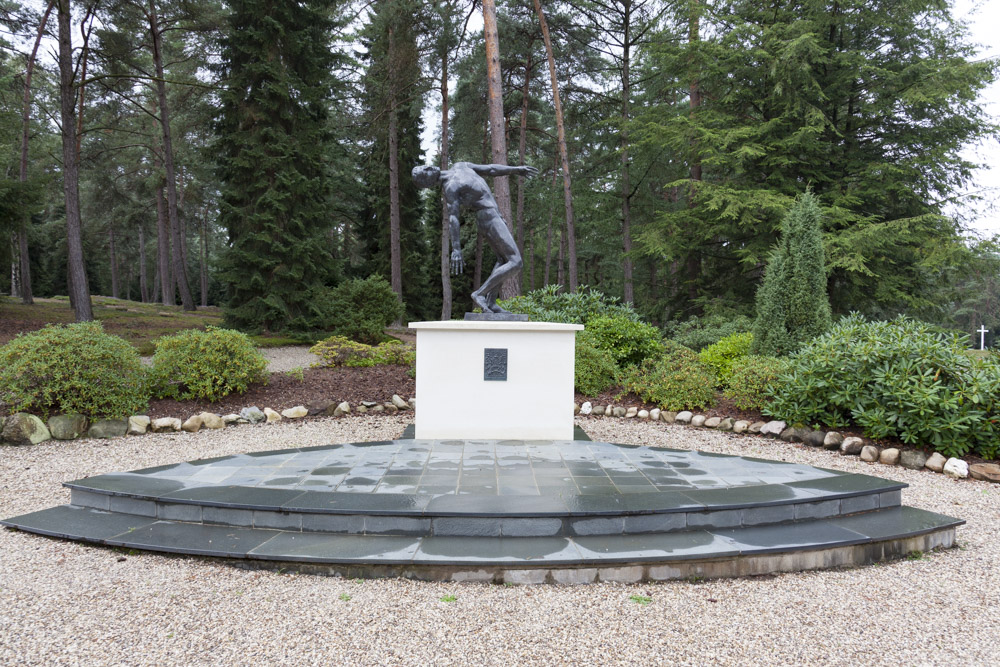 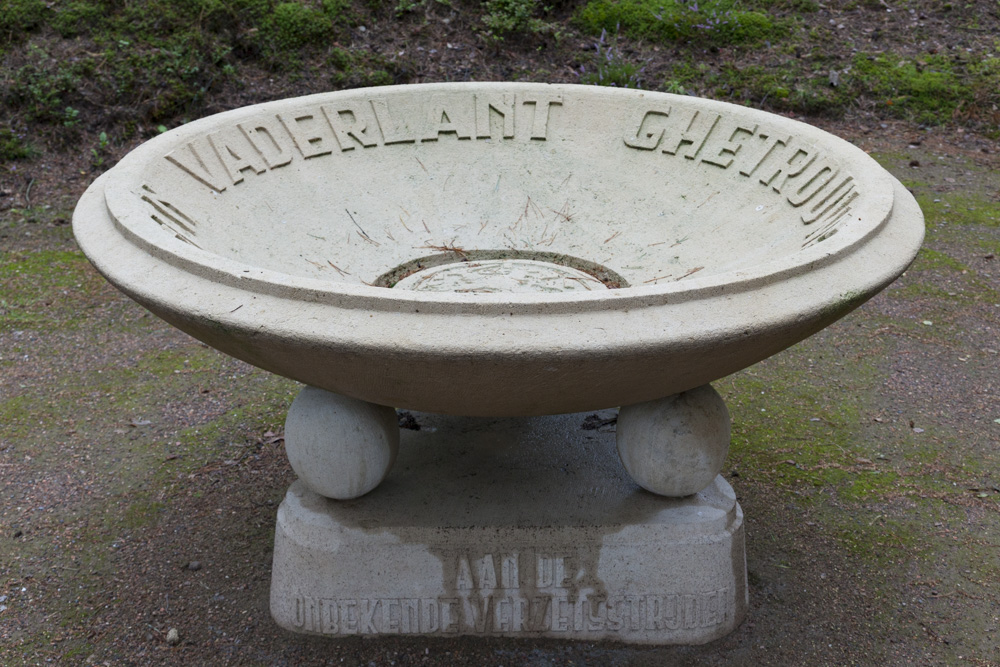 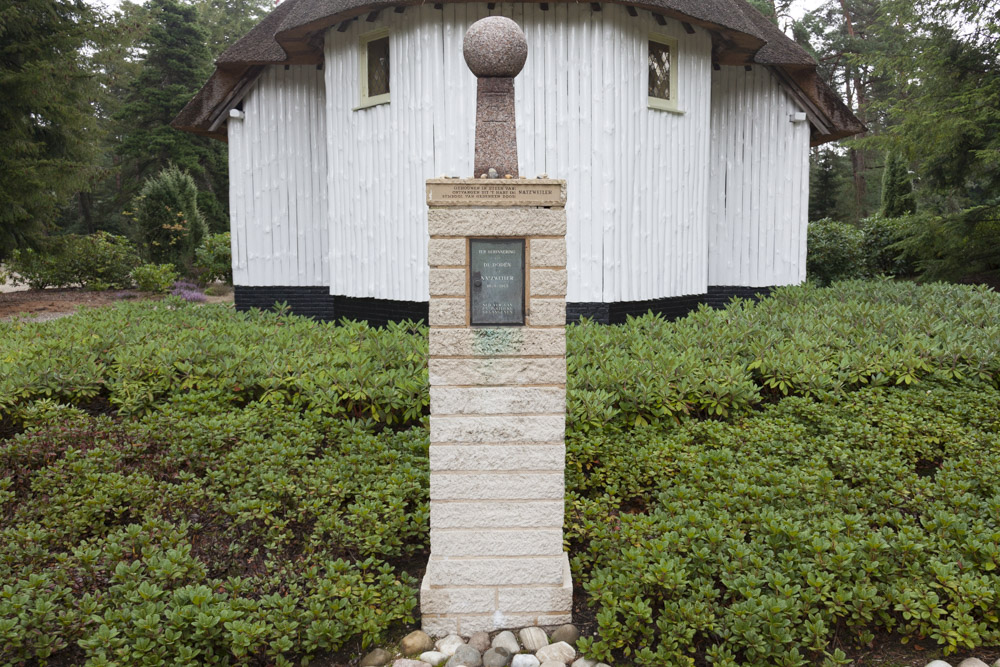