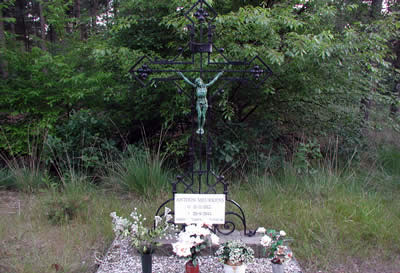 Toon was hidden in fear at his fiancée house for the German arbeidseinsatz. When he heard that Geldrop was liberated, the English were coming over the Dutch borders at Belgium and that Budel was liberated on the 20th of September 1944, made Toon decide to go back to Budel where his parents lived.

On his way back he met Jan Lammers who was the farm hand at a farmer in Soerendonk, they walked to the direction of Soerendonk together. But what Jan and Toon didn't know was that there were still some German SS'ers in the isolated heathlands. Around 5 PM in the afternoon suddenly 5 SS'ers were standing in front of them with their guns and bayonets pointed at them. They had to put their hands above their heads and they asked for their Ausweiss, Jan didn't have one with him Toon did, meanwhile one of the SS'ers was checking Toon's bag. Suddenly the Germans started cursing at Toon and yelled things like "wir schiessen dich kaputt". Jan had to keep walking forward and had to hear a few meters further on how Toon got shot and pierced with bayonets.

Why Toon was shot is only guessable, maybe he had a false identification card or some English items like cigarettes in his bag. This occurrence drew a dark shadow over the liberation of Budel and Soerendonk.