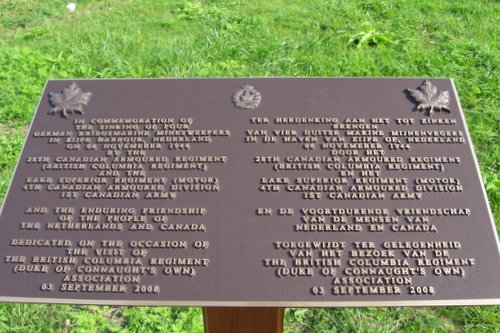 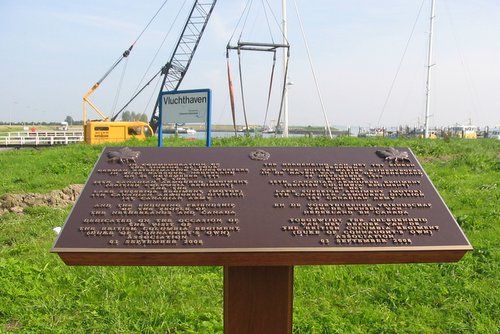 This plaque at the harbor, unveiled on September 3, 2008 by Canadian former combatants recalls the commitment of the Canadian soldiers of the Armored Regiment and the British Columbia Regiment during the liberation of the territory in Bergen op Zoom and the liberation of the village Bruinisse in 1944. In the harbor there were three German warships destroyed, a fourth ship was severely damaged.

The plaque is part of the trail liberationpad Zeeland, a 130 km. long path along monuments and sights that recall the events of the Second World War.

The inscription on the plaque is in English and Dutch.
In Commemoration of Tion the sinking of four German minesweepers kriegsmarine in Zijpe harbor, Netherlands. On 06 November 1944 by the
28th Canadian Armored Regiment (British Columbia Regiment) and the Lake Superior Regiment (engine) Canadian 4th Armored Division, 1st Canadian Army.

And the enduring friendship or the people or the U.S. and Canada.

Dedicated on the cars or visit the the British Columbia Regiment (Duke of Connaught `s Own) Association 03 September 2008.