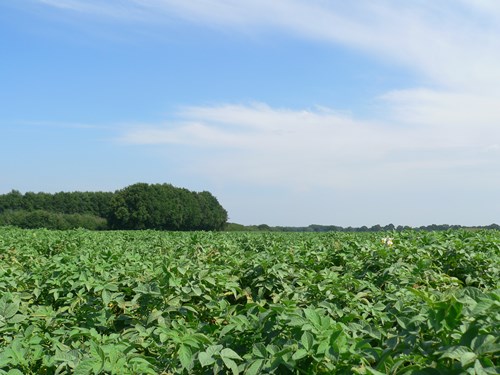 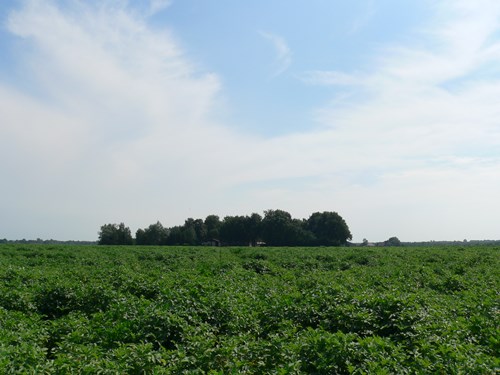 On March 9, 1942, the heavy bomber Manchester R5779 took off from Scampton in order to attack the city of Essen in Germany. The crew at that moment could not guess that their aircraft would be one of the eight of the squadron that would not return home any more.

Over the north of the Netherlands it all went wrong. The aircraft was hit in its lower fuselage and caught fire. Shortly afterwards it was hit again, now further to the rear. Over Witten the aircraft dropped its bomb load (or lost it), which sent a farmhouse up in flames. Flying Officer R. Cooper ordered his crew to abandon ship. He himself and four other crew unfortunately did not succeed and lost their lives in the crash near Oranje. Only two crewmembers survived. They described the circumstances of this tragedy.

Air Gunner Alfred Key originally would man the guns in the rear of the aircraft. His colleague Charlie Broad who was supposed to take the mid-upper position, which included the passing on of orders to other crew members, asked Alfred to trade places, to which he agreed. Charlie did not like the task of passing on instructions which was the reason for the exchange. With hindsight the men also traded at that moment the fate that was waiting for them.

Alfred describes that at a certain moment he sees flames and that the front side of his cupola has been completely shot away, while he himself has not had an opportunity to fire a single shot. Later on he finds a large fragment of the cupola in his flying boot. When he looks below him, he sees a bright fire and he grabs an extinguisher in order to quench the flames together with George Dalby. They succeeded, but the aircraft received another hit, this time more to the rear, close to the bomb hatch.

The aircraft fills with flames and smoke and cannot be saved any more. Alfred could not find the escape hatch because of the thick smoke. He thinks he will die and, to his own astonishment, becomes very calm. He thinks of his good friend Charlie with whom he traded places. He tries to get to him to see how he is doing. After a few steps however he tumbles through a hole in the floor. His parachute has turned around the wrong way by his drop and he had to restore this quickly in order to be able to pull the ripcord. Almost at the same moment of the opening of his chute, Alfred lands with an enormous thud on the frozen earth.

The fall was that bad that Alfred is only able to move after a considerable time. With pain he frees himself from his harness and while he tries to stand upright , he notices that he has hurt his leg. He did not feel any pain as yet, that came later. He stayed on the ground for a while and listened to the allied aircraft passing high in the air, he did not hear any German airplanes.

Alfred succeeded in crouching towards a hedgerow and then he saw their aircraft burning in the field next to him. Also he saw various people around the wreckage. Desperately he tried to observe whether there were any of his own lads between them but then realized that this was rather naive of himself. Nobody would have been able to survive this crash. Alfred writes that he never ever felt himself so much alone in his entire life.

Suddenly he was being addressed, with hindsight he thinks in Dutch, but at the time he thought it was German and he expected a bayonet in his back at any moment. It is likely that Alfred has never known that this was probably Mr. Motz, a German with a good reputation and who lived already before the war in the farm which was near the crash site. Possibly the language he heard was a mixture of a little bit of both.

When Alfred turned around he saw a civilian on a bike. The man put him on the bike and rolled him towards the farm. There Alfred was given some food and drink, where after he was collected by the police. The head of the police department came to Alfred with maps, a compass and a food parcel, in order to show him the way to escape. When it appeared that Alfred was injured, both men started to debate.

With concurrence of Alfred he then has been transferred to the Germans, in order that his leg could be properly treated in hospital and that he could obtain the medical treatment that he needed. His leg was so swollen now, that they had to cut open his trousers. Alfred suffered terribly but after they had doused his leg with a tranquilizing liquid, it slowly became bearable. Alfred was transferred to a Luftwaffe camp, where he was placed in solitary confinement. During his interrogations he was told that a German pilot had been awarded for the shooting down of their aircraft. Alfred himself is absolutely convinced that they had been downed by anti aircraft fire (Flak).

George Rex flew in the front of the aircraft as Gunner of the Manchester. Also he described his memories of the crash. When the airplane was completely on fire, he opened the escape hatch and jumped from the aircraft at 02:20. He landed in a snow covered forest in a sparsely populated area west of the Drentsche hoofdvaart (= a canal). His only injuries were light burns on his hand and around his eyebrows.

George walked in a westerly direction, hoping to find a ship in either a Zuiderzee or North Sea port. He walked on until daylight and rested in a cabin till nightfall. When it was dark, he travelled on. Now and then he saw some people far off. He followed a canal into a village and passed various persons. Outside the village he approached three Dutchmen and explained to them with hand gestures and in basic English that he was a crashed British airman. One of the men walked away and returned with milk and cheese rolls. George shook hands with his helpers and continued on his way. The next day he met with a group of kids. The eldest kid offered him his bike. As this bicycle was a ramshackle, George thanked him for the offer but said no and continued by foot. The boy however overtook him and brought him to his parents where he was welcomed. George received food and drinks and a bed to sleep in. He was soon asleep.

The father of the boy, Hendrik David Nyalt, took George to the local policeman who was a member of the resistance. But a policeman of a higher rank transferred him to the Germans however, after which he finally ended up in Stalag Lamsdorf after having passed through various other places. There he met his friend and fellow crewmember Alfred Key again. Both were kept imprisoned till the end of the war.