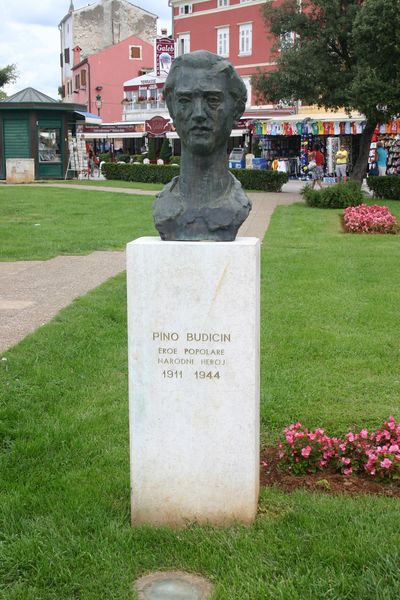 The battalion " Pino Budicin " is named after the communist activist and Yugoslav national hero Giuseppe Pino Budicin , born April 27, 1911 in Rovigno d' Istria , a small town on the Istrian coast . At the age of 21 years Pino Budicin was seconded to the Italian Royal Navy at the naval base of La Spezia . At the end of his military service Pino Budicin went back to his hometown . Between 1933 and 1943 he was arrested many times for his activities in the Italian Communist Party . On September 8, 1943 after the Italian radio the expiration of the armistice between Italy and the Allies had sent , he quickly organized a revolt in Rovinj. When the German army retook the town a few weeks later , he moved out of the city , along with his comrades and was an active member of the partisans.
He was shot by a firing squad . During his execution , he shouted to the firing squad : " From every drop of my blood , hundreds of partisans."

After the war, local authorities erected a bust. At the time of his death he was secretary of the Communist Party in Rovigno and the local representative of the National Anti - Fascist Council of the People's Liberation of Croatia ZAVHOH.

The first Partisan Battalion Pino Budicin was a military unit of Vladimir Gortan Brigade , 43th Division of the 4th Army Corps of the Yugoslav National Liberation Army during the Second World War . The battalion was composed almost entirely of Italians , most of them from the former Italian region of Istria.