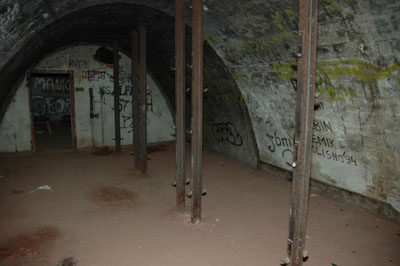 This bunker of the German Festungsfront Oder-Warthe-Bogen (Ostwall a.k.a. East Wall) was built between 1938 and 1939.

On 28 January 1945 the Red army launched an attack on the central part of the Ostwall. After 3 days of intense fightings the Russians managed a break through in the central and southern parts.

The bunker today:
Despite the fact that Panzerwerk 754 was largely destroyed by the Red army, it is still possible to reach the underground tunnel system through this bunker.