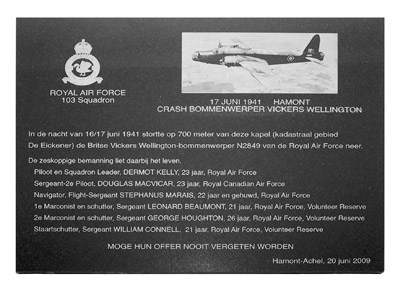 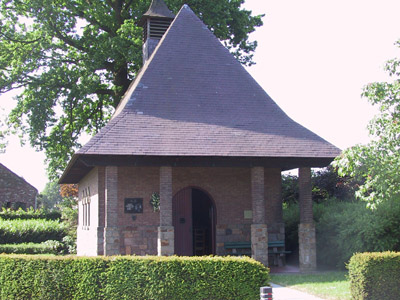 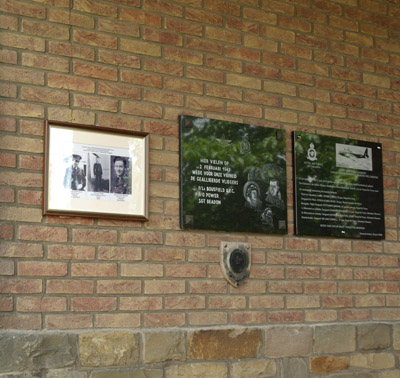 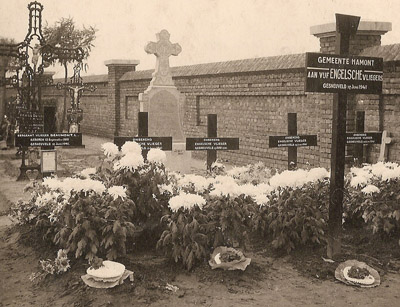 On the night of 16th to 17th June 1941 the Wellington-bomber N2849 of the Royal Air Force crashed in the Belgian town of Hamont (north-eastern part of Belgium). The complete crew of six lost their lives.

Nearly two years later, on 2nd February 1943, a Lancaster bomber came down at only 500 yards from the Wellington crash-site.

On 16th June 1941 between 22:50 and 23:05 hrs seven two-engine Wellington bombers of the 103rd Squadron took off from Newton Air Base in the English county of Nottinghamshire. Their mission was to bomb the harbour installations at the river Rhine in Duisburg. For this purpose each plane had enough load on board: three 500 pound bombs with direct ignition, one 250 pound bomb with delayed ignition and 6 units with 4 pound incendiaries.
After dropping this load, the seven Wellingtons had to scatter pamphlets above the German cities of Gladbeck and Krefeld.

In this phase of the Second World War it was still customary for each plane to set its own course and to fly to the target on its own.
Only some general orders were issued, like crossing the coastal area to the north of Orford Ness and some information about the most important German flak concentrations was given.

With a cruising speed of 140 miles/hour (± 225 km per hour) and only bothered by some high clouds, they flew to their target in Duisburg. In the target area the visibility varied from good to moderate. A thin ground fog hampered the accurate aiming of the bombing load. Because bomb aiming was not accurate yet in 1941, not one Wellington could drop its bombs right on the target.
As a result of this, also civilian targets in the city of Duisburg were hit and there were civilian casualties.

Above Duisburg the Wellingtons were caught in search lights and they encountered heavy flak. Beside that, they were attacked by several German night fighters. Two aircraft were hit, but until today it still is not clear whether the N2849 was then also hit. On their way home the plane was intercepted by the German Messerschmidt ME110 of Lt Reinhold Knacke of the 2NGJ/1.
The Wellington went out of control and crashed at 02:25 hours.
It is highly probable that the plane broke apart, as parts of it fell at Soerendonk (NL) and the largest part came down at Hamont. The crash site is situated behind the houses in the Teutenstraat, known at the land registry as "De Eickener".

In the cemetery at Hamont five of the six crew members were temporarily buried. At the funeral the townspeople paid tribute to the deceased airmen and laid flowers on the graves. An original photo of the decorated graves is preserved by the local heritage society and history association De Goede Stede Hamont.
After the war, the six crew members were reburied in the military cemetery at Heverlee (Leuven).