American Gerald Reyburn, nicknamed 'Jerry' by the other members of his crew, left his hometown Louisville aged 18 when he volunteered to fly in the Royal Canadian Air Force before the United States had entered the war. His parents, brother and sister would not see him again, as he was reported 'Missing, believed killed in action' when his Wellington was lost over Holland in the autumn of 1942. His family knew nothing about the fate of Reyburn, till 1947, when they learned he was buried in Rockanje. 'Jerry' was the Air Gunner in the crew of Wellington X3455 of 142 Squadron, which was lost on a mission to Milan during the night of 24/25 October 1942.

A double raid on Milan

RAF Bomber Command tried to inflict damage to the axis war machine from the air. At first, by means of strategic bombardments on industrial and military targets. But when Air Marshall Sir Arthur Harris was appointed as the new commander in spring 1942 area bombing became the new strategy. Harris tactics consisted of multiple attacks on cities with industrial and military importance. On 24 October 1942 Bomber Command send out 88 Lancasters to bomb Milan in broad daylight. The main target was the Caproni aircraft factory. It was a successful raid, as it came as a complete surprise to the Italians. The bombs were dropped in 18 minutes and the anti-aircraft fire and Italian fighter defenses were both weak. A large number of commercial and industrial buildings were hit, including the aircraft factory. Although this raid was a success, Harris decided to send out another 71 bombers from No.1 and No.3 Group to the city in bad weather that night. No.142 Squadron delivered seven aircraft for the attack, including Wellington X3455. The crew of this machine was as follows:
Pilot: Sergeant Bartlett Parker Shaddick (21 years old, Australian)
Observer: Sergeant Frank Bernard Hough (28 years old, Canadian)
Navigator/Air Bomber: Sergeant Eric Watcham (40 years old, British)
Wireless Operator/Air Gunner: Sergeant Edwin Cuthbert Woollard (29 years old, British)
Air Gunner: Sergeant Gerald Thomas Reyburn (20 years old, American)

Hough was a Canadian serving with the Royal Air Force, while Reyburn was from Louisville, Kentucky (USA). He volunteered to participate in the Commonwealth Air Training Plan and served with the Royal Canadian Air Force. The crew was trained from July till September 1942 at No.26 Operational Training Unit, where they had flown their first operations to Dusseldorf and Bremen. They were posted to 142 Squadron on 25 September 1942.

Prior to 24 October the crew had flown three missions together to Krefeld (2 October), Cologne (15 October) and Essen (23 October). The operation to Cologne had been a hairy experience for the crew. Before reaching the target and over Cologne, the aircraft was hit by heavy anti-aircraft fire. The unexperienced pilot did a great job to bring back his heavily damaged Wellington and had to make a crash landing from low altitude at RAF Manston. He was awarded the Distinguished Flying Cross (DFC) for his actions. The announcement in the London Gazette reads: "One night in October, 1942, this airman captained an aircraft detailed to attack Cologne. On the outward flight, the aircraft was hit by anti-aircraft fire. Although the starboard fuel tank was pierced, causing much loss of petrol, Sergeant Shaddick flew on through heavy defences to his target which he bombed successfully. Whilst over the target area, the port engine was hit and ceased to function. Despite this, Sergeant Shaddick flew the aircraft back to this country on one engine and crash-landed at an aerodrome without injury to his crew. Throughout, he displayed great skill and determination." Shaddick learned about him being awarded the DFC on 19 October. He wrote in his diary he received congratulations from Air Marshall Harris.

On the evening of 24 October 1942 Wellington X3455 was the fifth aircraft of 142 Squadron to take off from RAF Grimsby. Shaddick set course for Milan, which was a flight of more than 3,5 hours. What exactly happened to X3455 after take-off is unclear. It was a very stormy night and the weather conditions dispersed the bomber force. Only 39 aircraft claimed to have made it to Milan. But what is known is that Wellington X3455 crashed in the North Sea, 10 kilometers west of Goeree-Overflakkee at 02:48 hours (Dutch time). Most aircraft which claimed to have bombed Milan arrived at their bases in England an hour later. The exact cause of the crash is unclear as well. However, there was a Wellington claimed shot down by Hauptman Horst Patuschka ten kilometers west of Goeree-Overflakkee at 03:10 hours (Dutch time).

The bodies of the crew all washed ashore along the Dutch coast. The remains of Hough were found on the beach at Katwijk on 23 November. He was buried there initially, but after the war he was re-buried at the Canadian War Cemetery in Bergen op Zoom. Woollard was found and buried at Monster. Watcham was found in the Amsterdam area and his grave is in the citys New Eastern cemetery. Reyburns body washed ashore at Rockanje on 3 December 1942 and he was buried in the village cemetery. The remains of Shaddick were found at Kijkduin on 24 November. He was taken to the Westduin cemetery in The Hague, where he is buried in front of the crew of Wellington Z1321, which flew with 142 Squadron as well. Apart from the widespread graves of the crew members there is no memory left of Wellington X3455.

If the reader of this article has further information on this bomber or its crew, then you are kindly requested to get in touch with the author.

area bombing
Aerial bombardment targeted indiscriminately at a large area. Prohibited since 1977 by the Geneva Convention. Also known as carpet bombing, obliteration bombing and moral bombing.
Bomber Command
RAF unit which controlled strategic and sometimes tactical bombing (as in Normandy)
Commonwealth
Intergovernmental organisation of independent states in the former British Empire. A bomber crew could include an English pilot, a Welsh navigator, air gunners from Australia or New Zealand. There were also non-commonwealth Poles and Czechs in Bomber Command.
front
Largest Soviet ground formation. It was attached to a certain area which gave its name to the units involved. For instance the Voronezh front.
RAF
Royal Air Force. British air force
raid
Fast military raid in enemy territory
Squadron
A military unit in the Belgian navy usually six to eight small ships operating together under one command. The smallest military unit in the Dutch air force of about 350 men. In most countries is the designation of a military unit thesize of a company. It is either an independent unit, such as a battery, or part of a bigger Calvary unit. In the air force it is the designation of a unit of aircrafts.
strategy
Art of warfare, the way in which war should be conducted in general.
tank
A combat vehicle with heavy armour and heavy armament driving on tracks. The tank, despite its heavy weight, is very mobile and able to move along various types of terrain. These properties, along with heavy firepower and protecting armour, give the tank a big strike power. 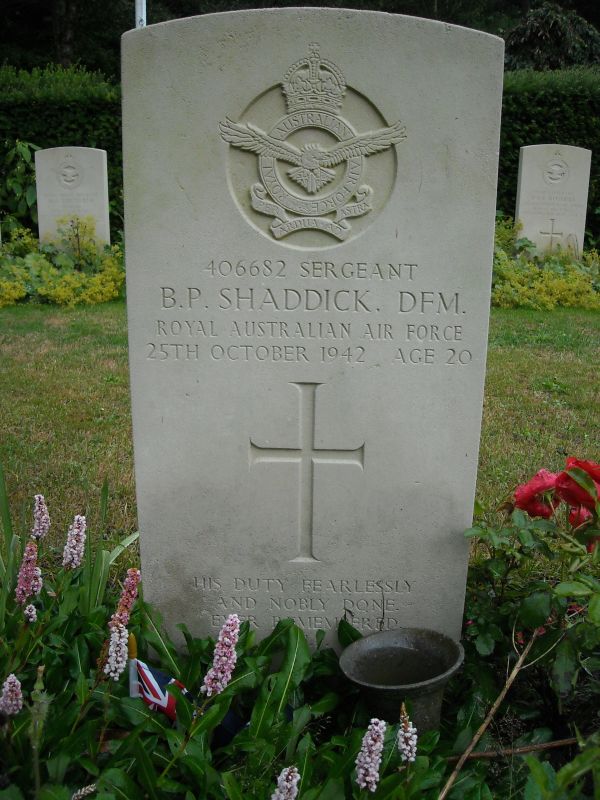 The grave of Shaddick in Den Haag. Source: Pieter Schlebaum. 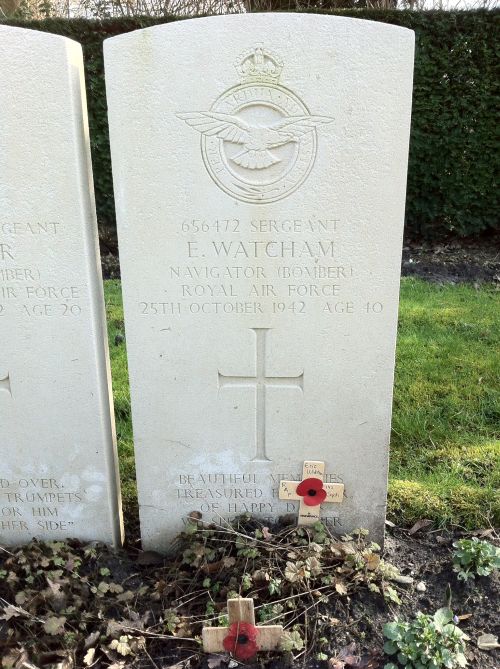 The grave of Watcham in Amsterdam. Source: Pieter Schlebaum. 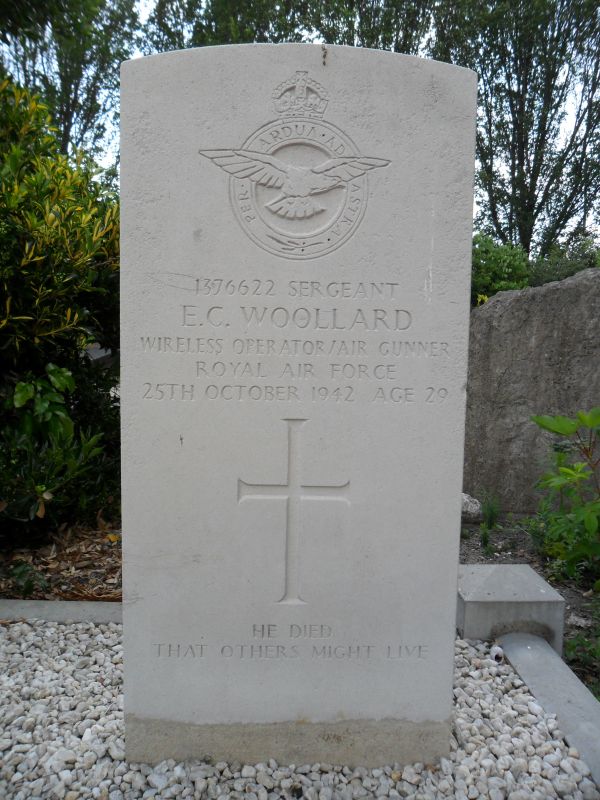 The grave of Woollard in Monster. Source: Pieter Schlebaum. 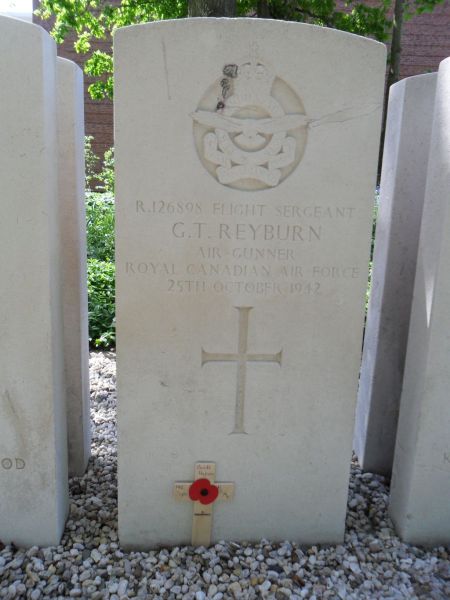 The grave of Reyburn in Rockanje. Source: Pieter Schlebaum.

Wellingtons of No.142 Squadron involved in the operation

An overview of the other Wellingtons of No.142 Squadron which were detailed for the operation to Milan on the night of 24/25 October 1942.

If the reader of this article has further information on these bombers or its crews, then you are kindly requested to get in touch with the author by using the feedback form. 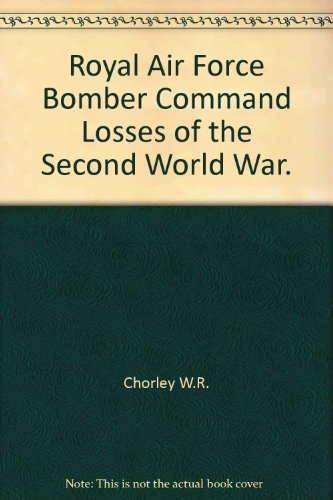