The raid on the radiostation at Gleiwitz

I, Alfred Naujocks, make this statement under oath after having been duly sworn in:

1. I was a member of the SS from 1931 until October 1944 and member of the SD from its establishment in 1934 until mid 1942. I served in the Waffen-SS from February 1941 to mid 1942. Later I was employed in the scientific department of the military government of Belgium from September 1942 until September 1944. On October 19th, I surrendered to the Allies.

2. About August 10th, 1939, Heydrich (Bio Heydrich), the chief of the Sipo (Security police) and the SD (Security service) personally ordered me to simulate an attack on the radiostation at Gleiwitz near the Polish border and to make it look like as if Poles had been the attackers. Heydrich said: We need hard evidence of Polish attacks for the foreign press and the German propaganda". I was ordered to drive to Gleiwitz with 5 or 6 other members of the SD and to wait until I received the codeword from Heydrich that the attack was to take place. My orders were to capture the radiostation and hold it as long as needed in order to enable a Polish speaking German to deliver a speech in Polish on the radio. This Polish speaking person was put at my disposal. Heydrich said that in this speech it should be stated that the time for a conflict between Poland and Germany had come, that the Poles were massing and would beat up any German opposing them. At the time Heydrich also told me he expected a German attack on Poland within days.

3. I drove to Gleiwitz and waited there for 14 days. Then I asked Heydrich for permission to return to Berlin but was told to stay in Gleiwitz. Between August 25th and 31st, I met Heinrich Müller (Bio Müller), the chief of the Gestapo who was in the vicinity near Oppeln at the time. In my presence, Müller and a men named Mehlhorn disclosed plans for a case on the border, in which should be simulated that Polish soldiers had attacked German troops. Germans, numbering approximately a company would be employed for this. Müller said he had some 12 to 13 convicted prisoners at his disposal, who would be dressed in Polish uniforms and whose bodies would be left behind at the scene in order to show that they had died during the attack. To this end, they would be given a lethal injection by a doctor, appointed by Heydrich; then they would also be riddled with bullets. After the attack had ended, members of the press and others would be taken to the site, furthermore a report should be made by the police.

4. Müller told me, he had been ordered by Heydrich to put one of those criminals at my disposal for my action at Gleiwitz. The codeword he used to designate this criminal was preserves.

5. The event at Gleiwitz, in which I particpitated took place on the night before the German attack on Poland. As far as I remember, the war broke out on September 1st, 1939. In the afternoon of August 31st, I received the codeword from Heydrich by telephone that the attack was to be launched at 20:00 hours that day. Heydrich said: "In order to carry out this attack, you should report to Müller for the preserves.". I did this and told Müller to deliver this man to me near the radiostation. I received this man and had him laid down at the entrance to the building. He was alive but unconscious. I tried to open his eyes. I could not determine by his eyes whether he was alive, only by his breathing. I saw no bullet wounds, just a lot of blood across the whole of his face. He wore civilian clothing.

6. We captured the radiostation as ordered, delivered a speech of about three to four minutes with an emergency transmitter, fired our guns a few times and then left the scene.

Sworn and signed before Lieutenant Martin. 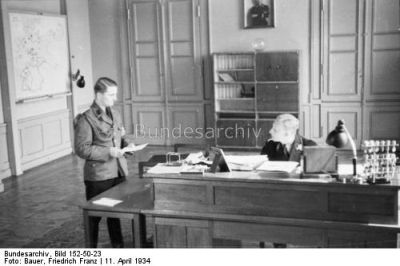 Alfred Naujocks, on the left and Reinhard Heydrich Source: Bundesarchiv 152-50-23.