2. After I was relieved of this duty, I was ordered to report to SS-Obergruppenführer Heydrich and SS-Gruppenführer Müller in Berlin. In June 1942 SS-Gruppenführer Müller charged me with the task of erasing the traces of the executions by the Einsatzgruppen in the East. My orders were to report in person to the commanders of the Sicherheitspolizei and SD in order to forward Müllers order by word of mouth and to supervise the execution thereof. This order was top secret and SS-Gruppenführer Müller had ordered that, owing to the utmost secrecy, nothing was to be put in writing.
In September 1942, I reported to Dr. Thomas in Kiev and passed the order to him. The execution of this task could not immediately begun with, on the one hand because Dr. Thomas was not inclined to carry out this order, on the other hand because the material required for the burning of the corpses was not available. In May and June 1943 I made various trips to Kiev in this connection and then, after discussions with Dr. Thomas and the SS and Police chief Hennecke, the task was carried out.

3. During my visit in August I attended the burning of corpses in a mass grave near Kiev myself. This grave was about 180 feet long, 10 feet wide and 8 feet deep. After the top soil had been removed, the corpses were doused with fuel and set on fire. It took about two days before the grave had completely burned out. I have seen for myself that the grave was glowing down to the bottom. Afterwards, the grave was filled and with that all traces were as good as obliterated.

4. Because of the advancing front, it was not possible to demolish the mass graves, dug after the executions by the Einsatzgruppen, further away in the south and east. That is why I traveled to Berlin to report and then I was dispatched to Estonia by SS-Gruppenführer Müller. I passed the same order to SS-Oberführer Dr. Achamer-Pifrader as well as to SS-Obergruppenführer Jeckeln. In order to obtain fuel I returned to Berlin. The burning of the corpses did not begin until May or June 1944. I remember that these cremations took place near Riga and Reval. I was present at a few of these in the vicinity of Reval, here the graves were smaller however and contained about 20 to 30 corpses. The graves in the vicinity of Reval were located between 12.43 and 18.64 miles east of the town in a swampy area and I think four of five graves were opened and the corpses burned.

5. According to my orders, my task should have encompassed the entire area of the Einsatzgruppen; as a result of the retreat from Russia however, I was not able to fully comply to my order.

Before me, Rolf Wartenberg, D-090064, a U.S. Civilian appeared Paul B l o b e l , to me known, who in my presence signed the foregoing "Eidesstattliche Erklaerung" (sworn statement) consisting of three (3) pages in the German language and swore the same was true.

Einsatzgruppen
Taskforces of Deployment Squads. Special units composed of various SS and police services under supervision of the Reichssicherheitshauptamt (RSHA). Einsatzgruppen were deployed during the invasion of Poland in 1939 and during operation Barbarossa in 1941. In 1939 these units were ordered to eliminate the Polish intelligentsia. In the Soviet Union they were deployed to execute various political and racial enemies of the Third Reich, like Jews, gypsies and communists. The Holocaust by bullets in the Soviet Union was the horrendous first act of the eventual final solution.
front
Largest Soviet ground formation. It was attached to a certain area which gave its name to the units involved. For instance the Voronezh front. 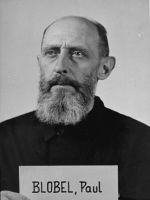