Both signatory parties pledge to abstain from any act of violence, any aggressive action or any attack on each other, be it individually or in conjunction with other parties.

The governments of both signatory parties shall in future keep in touch continuously for purposes of consultation in order to keep each other informed on issues concerning their mutual interests.

Neither signatory party shall join any international partnership which is aimed, directly or indirectly, against the other party.

The treaty shall be entered into for a period of ten years with the provision that as long as one of the signatory parties does not give notice one year before the period of ten years expires, the validity of the treaty is considered to be automatically extended with five years.

This treaty shall be ratified within the shortest time possible. The ratification documennts shall be exchanged in Berlin. The treaty shall come into force as soon as it has been signed.

Drafted in duplicate in German as well as in Russian language.

On behalf of the German government:
J. v. Ribbentrop

The plenipotentiary of the government of the U.S.S.R.:
V. Molotov

Actuated by the signing of the non-aggression treaty between the German Empire and the Union of Socialist Soviet Republics, the signatory plenipotentiaries of both parties have discussed the issue of the demarcation of their mutual spheres of influence in Eastern Europe in a strictly confidential oral consultation. This consultation has led to the following result.

1. In case of a geopolitical re-arrangement of the territories belonging to the Baltic states (Finnland, Estonia, Latvia and Lithuania), the northern border of Lithuania shall simultaneously represent the border of the spheres of influence of Germany and the Soviet Union. The Lithuanian interests concerning the area around Vilna shall be recognised by both parties.

2. In case of a geopolitical re-arrangement of the territories belonging to the Polish state, the spheres of influence of Germany and the Soviet Union shall be roughly demarcated by the course of the rivers Narev, Weichsel and San. The question whether maintaining an independent Polish state is desirable for the mutual interests and how this state is to be demarcated, can only be answered definitely in the course of further political developments. In any case, both governments shall solve the issue by friendly consultation.

3. Concerning southeastern Europe, the Soviet Union has shown interest in Bessarabia. The German party has indicated to be totally uninterested politically in these areas.

4. This protocol shall be considered strictly secret by both parties.

On behalf of the German government:
J. v. Ribbentrop

The plenipotentiary of the government of the U.S.S.R.:
V. Molotov

Nazi
Abbreviation of a national socialist.
neutrality
Impartiality, absence of decided views, the state of not supporting or helping either side in a conflict.
ratification
Confirmation, agreement by a government or parliament of an international agreement.
Soviet Union
Soviet Russia, alternative name for the USSR. 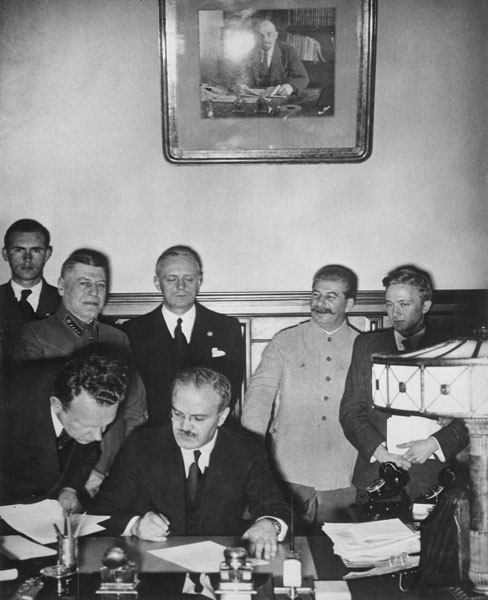 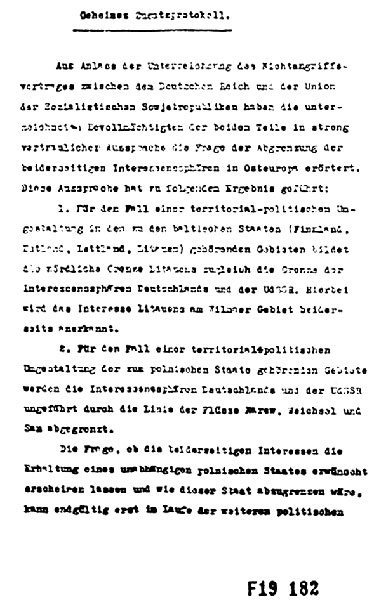 Page 1 of the German version of the secret protocol Source: Public domain. 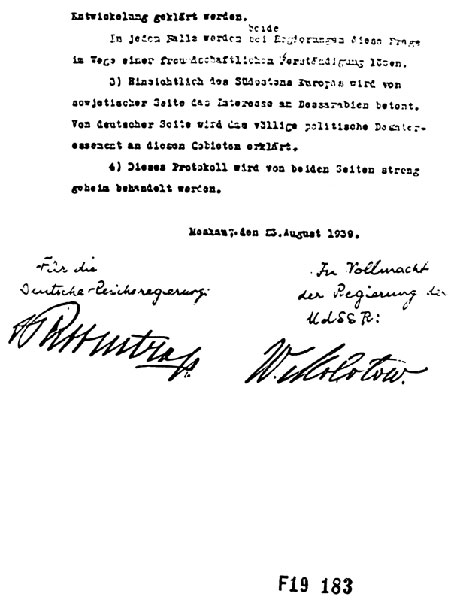 Page 2 of the German version of the secret protocol Source: Public domain.