During World War Two, Jürgen Stroop was involved in the suppression of civilian revolt, the fighting against partisans and the persecution of Jews in Czechoslovakia, the Soviet Union, Poland and Greece. He became most notorious by his role as leader of the suppression of the uprising in the Warsaw ghetto in the spring of 1943. Stroop was known among his colleagues as a ruthless brute. He was loyal to Heinrich Himmler (Bio Himmler) and followed his orders with total devotion.

Jürgen Stroop was born September 26, 1895 in Detmold, a village in the Lippe district in the present federal state of North Rhine-Westphalia. Originally, his Christian name was not Jürgen but Josef. In May 1941 he changed it to Jürgen for ideological reasons and in memory of his deceased son. He was the son of a police officer and was brought up in a lower middle class Catholic environment. During World War One he voluntarily served in the Reichswehr. He got injured and consequently was awarded the Verwundetenabzeichen in Schwarz (medal for the wounded in black). He was awarded the Eisernes Kreuz 2 (Iron Cross) as well. Towards the end of the war, Stroop had risen to Vizefeldwebel.

Between the wars, Stroop was employed by the land registry office in Detmold until 1933. In July 1932 he became a member of the NSDAP and on July 7 he joined the SS. Between July and October 1932 he served in the 19. SS-Standarte, a regiment of the Allgemeine-SS. Following his promotion to SS-Scharführer on October 22, he commanded his own Sturm  comparable to a Kompanie in the army  in this SS-Standarte from October 1932 until January 1933. Subsequently he was in command of a Sturmbann  comparable to a battalion  in 7. SS-Standarte from January 1933 until May 1934. Meanwhile, on February 15, 1933, he was promoted to SS-Truppführer. Over a year later, on March 1934, he was promoted to SS-Hauptsturmführer.

Stroop quickly rose through the ranks. Between May 25, 1934 and June 1, 1935 he was chief of staff of SS-Abschnitt XVII, a district of the Allgemeine-SS with its headquarters in Münster. After he had been promoted SS-Sturmbannführer on April 20, 1935, he was in command of 28. SS-Standarte between May 20, 1935 until November 1, 1938; the unit in which he had previously commanded a Sturmbann. In the meantime he was promoted to SS-Obersturmbannführer on April 20, 1936 and on September 12, 1937 to SS-Standartenfüher. Between November 14, 1938 and March 6, 1940, he was in charge of SS-Abschnitt XXXVIII based in Karlsbad in annexed Czechia. Here, among other things, he was responsible for the suppression of the Czech independence movement.

In the same period  September and October 1939  he was commander of the Volksdeutsche Selbstschütz in Posen (today Poznan in Poland).This unit was a civilian militia, established in the first days of September in order to protect ethnic Germans from atrocities by the Poles. Although the ethnic Germans were being suppressed in Poland and sometimes fell victim to attacks or pogroms by Poles, this was greatly enlarged and exaggerated by German propaganda. During the German invasion in Poland and in the months afterwards, members of this Selbstschütz subsequently incriminated themselves by committing serious crimes against the Polish population. Over 2,000 Poles were killed by Stroops men.

Meanwhile, on September 10, 1939 Stroop had been promoted to SS-Oberführer. Following the invasion of Poland he was in charge of SS-Oberabschnitt XXXXII between March 6, 1940 to November 1, 1942 with its headquarters in Gnesen (Gniezo), a town in the part of Poland annexed by Germany. During Operation Barbarossa, the German invasion of the Soviet Union, he took part between July 7, until September 1941 voluntarily as company commander in the SS-Totenkopf-Division of the Waffen-SS. In addition, from September to October 1941, he was officer of the reserve in the replacement battalion of the Leibstandarte SS "Adolf Hitler (LSSAH).

On January 1, 1942, Stroop was appointed Oberst der Polizei. He was subordinate to the Höhere SS und Polizeiführer Rußland Süd and in his capacity as inspector of the Sicherheitspolizei (Sipo) and the Sicherheisdienst (SD) he was charged  from December 1941 to October 1942 - with the protection of the main highway connecting Lemberg in Galicia (the present Lviv in the Ukraine) and Stalino in southern Russia. Here he became engaged in fights against partisans. Subsequently he took a training for SS und Polizeiführer in Russia. On September 16, 1942 he was appointed SS-Brigadeführer und Generalmajor der Polizei. Before commencing a ten week training to become SS und Polizeiführer (SSPF)from December 1942 to February 1943 - at the Reichssicherheitshauptamt (RSHA), he was in charge for a short while of 2 SS-garrisons in the present Ukraine. After graduation, he was appointed S.S.P.F. in the Lemberg region. During his short stay, the persecution of Jews was intensified.

Uprising in the Warsaw ghetto

Jürgen Stroop became best known for his leadership during the suppression of the uprising in the Warsaw ghetto. When the Nazis launched the final evacuation of the ghetto on April 19, 1943, they faced fierce resistance. Jewish men and women had armed themselves and had established a strike force commanded by Mordechai Anielewicz. The Jewish warriors took revenge on the Germans who had deported their family members to extermination camp Treblinka in the previous months. Stroop was sent to Warsaw to replace SS-Oberführer Ferdinand von Sammern-Frankenegg as SSPF in the Warsaw region as the latter was considered incapable of suppressing the uprising.

It was intended to quell the uprising within 3 days but it took until May 16, 1943 before Stroop could inform his superiors his operation had been completed. He reported 56.065 Jews killed or deported but actually this figure is higher as many victims of fires were not recorded. As a memo of his Großaktion, Stroop had his reports bundled in a nice looking book, bound in granulated leather, illustrated with 54 pictures and entitled: "Es gibt keinen jüdischen Wohnbezirk in Warschau mehr!" (A Jewish quarter in Warsaw no longer exists). It was submitted as important evidence to the International Military Tribunal in Nurnberg. Stroops report elicited this reaction from Alfred Jodl (Bio Jodl), one of the defendants: "You dirty, arrogant Nazi swine. Image you writing a bragging report of 75 pages about a small murder action while for an important campaign, undertaken by soldiers against a well armed army, only a few pages are needed."

After having quelled the uprising in the Warsaw ghetto, Stroop was appointed HSSPF in Greece on September 8, 1943 Shortly after, on November 9, 1943 he was promoted to SS-Gruppenführer und Generalleutnant der Polizei. This appointment made him haughty. On his arrival in Athens, he informed the Greek prime minister Ioannis Ralls and his secretary of Foreign Affairs they were henceforth only answerable to him. They were also forbidden to communicate with Generaloberst Alexander Löhr, the military commander in Greece without his permission. Doing so, Stroop exceeded his authority because in his position as HSSPF he was responsible for police and security matters, not for the ruling of the country. That authority was in the hands of a Militärverwalter, a military government headed by Löhr at the time. In addition, political issues were also the responsibility of Hermann Neubacher, Sonderbevolmächtigter des Auswärtiges Amtes für den Südosten (special envoy for the southeast of the Department of Foreign Affairs). Stroop also intended to draw full jurisdiction over the battle against partisans to himself which for a large part was the responsibility of the Wehrmacht.

In Greece, Stroop was not only involved in politics and the fight against partisans but also in the persecution of Jews. On October 3, 1943, he issued an order all Jews were to register within 5days on penalty of being executed. Because few Jews followed this order, the term for registration was extended to October 17. This met with little success too because out of an estimated 8,000 Jews in Athens, only 1,200 showed up for registration. At least 60,000 Jews perished during the Holocaust but Stroops involvement in it was only minor because hardly a month later, Stroops career as HSSPF in Greece came to a sudden end. Hermann Neubacher had complained about Stroops lack of political tact to his old friend, Ernst Kaltenbrunner (Bio Kaltenbrunner), chief of the RSHA and so Stroops boss. Consequently, Stroop was recalled to the Reich on October 4, 1943. Then, from November 9, 1943 to March 24, 1945 he was in charge of SS-Oberabschnitt Rhein-Westmark. In addition he held the post of HSSPF in that district between November 11, 1943 and May 8, 1945. In this period, he was awarded the EK 1 (Iron Cross) on June 18, 1944 and promoted to Generalleutnant der Waffen-SS on July 1, 1944.

Jürgen Stroop was arrested by the Americans on May 8, 1945. On March 22, 1947, an American military court in Dachau sentenced him to death for the execution of American pilots and hostages in Greece. His execution was suspended because he was extradited to Poland. On July 23, 1951, a Polish tribunal sentenced him to death again. On March 6, 1952, the verdict was executed in a prison in Warsaw, on the location of the former ghetto.

Abschnitt
Description for a district of the Sturmabteilung (SA) or the Schutzstaffel (SS).
Division
Military unit, usually consisting of one upto four regiments and usually making up a corps. In theory a division consists of 10,000 to 20,000 men.
Eisernes Kreuz
Iron Cross. German military decoration.
ghetto
Part of a town separated from the outside world to segregate Jewish population. The establishment of ghettos was intended to exclude the Jews from daily life and from the rest of the people. From these ghettos it was also easier to deport the Jews to the concentration and extermination camps. Also known as Judenviertel or Jewish quarter.
Holocaust
Term for the destruction of European Jewry by the Nazis. Holokauston is the Greek term for a completely burnt sacrifice.
invasion
Armed incursion.
Iron Cross
English translation of the German decoration Eisernes Kreuz.
Jews
Middle Eastern people with own religion that lived in Palestine. They distinguished themselves by their strong monotheism and the strict observance of the Law and tradition. During World War 2 the Jewish people were ruthlessly persecuted and annihilated by the German Nazis. . An estimated 6,000,000 Jews were exterminated.
Leibstandarte
Elite troops, originally Hitlers body guards. Starting as a motorized infantry regiment it grew into a Panzer division.
Nazi
Abbreviation of a national socialist.
NSDAP
Nazi Party, byname of National Socialist German Workers' Party, German Nationalsozialistische Deutsche Arbeiterpartei (NSDAP), political party of the mass movement known as National Socialism. Under the leadership of Adolf Hitler , the party came to power in Germany in 1933 and governed by totalitarian methods until 1945.
Oberabschnitt
Main district of the protection squadron (Schutzstaffel), the SS, from November 1933.
propaganda
Often misleading information used to gain support among supporters or to gain support. Often used to accomplish ideas and political goals.
regiment
Part of a division. A division divided into a number of regiments. In the army traditionally the name of the major organised unit of one type of weapon.
Reichswehr
German army during the Weimar republic.
resistance
Resistance against the enemy. Often also with armed resources.
RSHA
Reichssicherheitshauptamt. The central information and security service of the Third Reich.
Sipo
Sicherheitspolizei. Combination (since 1936) of the Gestapo and criminal police.
Soviet Union
Soviet Russia, alternative name for the USSR.
Totenkopf
Deaths head. Symbol that was used by the SS. Also the name of an SS Division.
Waffen-SS
Name of Military section of the SS.
Wehrmacht
German armed military forces, divided in ground forces, air force and navy. 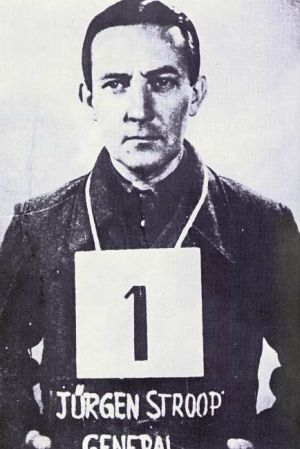 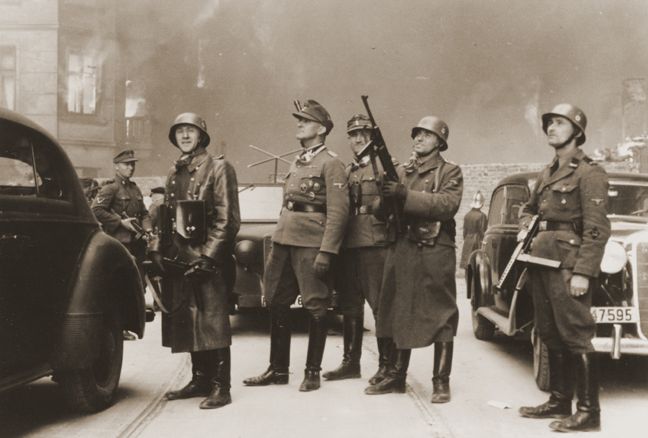 Stroop (center) leader of the suppression of the revolt in the Warsaw ghetto Source: NARA. 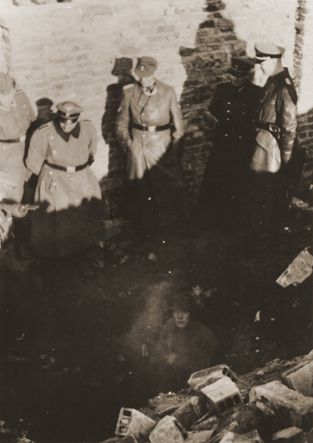 Stroop and his men inspecting a bunker of the Jewish Forces in the Warsaw ghetto Source: NARA. 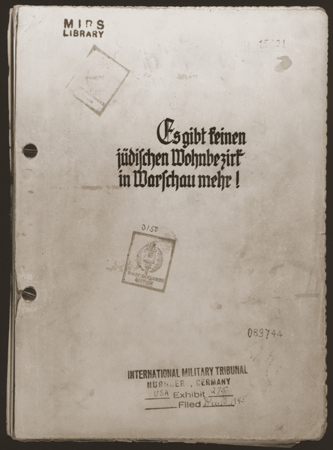 The report compiled by Stroop after the revolt in the Warsaw ghetto had been suppressed Source: NARA. 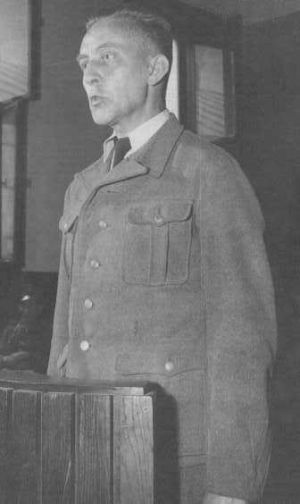 Stroop in the dock after the war Source: NARA.