Below is the translation of the diary entries of the German propaganda minister Joseph Goebbels. He describes the Pogrom against the Jews that was broken out in the night of November 9, 1938, cynically called the Kristallnacht or Reichskristallnacht. The atrocities, which were orchestrated by Goebbels, were a coordinated response to the death of the German diplomat Ernst vom Rath. He died as a result of an assault, committed by the Jewish young man Herschel Grynszpan. 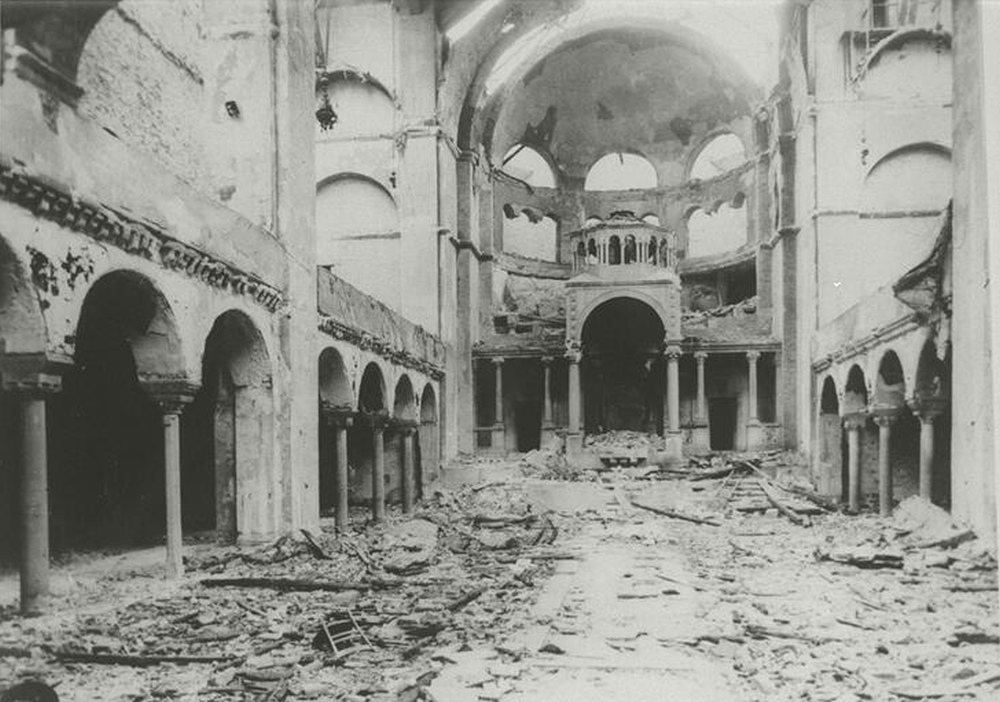 The interior of the synagogue on Fasanenstrasse in Berlin, burnt out during the Kristallnacht. Source: Center for Jewish History, NYC

Yesterday: the traditional march from the Bürgerbräu to the Feldherrnhalle (Hall of the Marshalls in Munich) and then to the Königlicher Platz (Royal Square). Its a grey November day. Immense crowds standing along the streets. At the Royal Square the great funeral celebration.[1] Very dignified and atmospheric.

Chatted with Ley[2]. He is a good guy. He too is sometimes tired of everything and yearns for peace. He complains very much that he so rarely meets the Führer.

Lutze[3]. grumbles mightily about the S.S. Not entirely wrongly, but partly also from competitive envy. Himmler has set up a lot.

Work in the hotel: the expansion of the wireless and cable radio should now be actively taken in hand. I want exact dates now.

The theatres in Sudetengau require large subsidies. Ill approve them right away to enable them to start playing again.

In contrast to before too many take care of the press now. That does not work well either. Ill reduce that a bit.

The condition of the diplomat Rath in Paris, shot by the Jew, is still very serious. The German press is going strong.

The speech of the Führer in the Bürgerbräu finds a very strong echo at home and abroad.

Helldorff[4] [Correctly: Helldorf] completely disarms the Jews in Berlin. They will also have to be prepared for a lot of other things.

Moscow proclaims once again the world revolution. Under the great and wise world marshal Stalin. But that all sounds so hollow. Moscow lost all its prestige in the Czech crisis.[5] This can not be caught up with phrases.

Worked this afternoon on my new book. That makes real fun now.

Dietrich grumbled about Berndts[6] article written at my request. But more against Berndt. Good that Berndt is going to a new department.

In Kassel and Dessau large demonstrations against the Jews, fire was set to synagogues and shops demolished. In the afternoon the death of the German diplomat vom Rath is reported. Now it is ready.

I go to the reception of the party in the old town hall. It was very crowded. I bring the matter to the Führer. He decides: let the demonstrations go on. Withdraw police. The Jews should get to feel the anger of the people. Thats right. Ill give appropriate instructions to police and party. Then I talk briefly before the party leaders in this sense. Stormy applause. Everyone rushes immediately to the telephones. Now the people is going to take action.

Some wimps hesitate. But I keep pushing on. We can not leave unanswered this coward murder. Let things take their course. The Stosstrup Hitler[7] starts right away to clean up in Munich. That happens straight away. A synagogue is smashed in grit. I try to save it from the fire. But that fails.

Meanwhile I talk with Schwarz[8] about financial issues. With Streicher[9] about the Jewish question. With Ribbentrop[10] about foreign policy. He, too, thinks that Czechia can now be taken in by the cold way. We just have to start it well. Chvalkovski[11] [Correctly: Chvalkovský] wants. If the others want too, is impossible to say.

With Wagner[12] to the Gau. I issue a precise circular letter explaining what can and can not be done. Wagner gets cold feet and trembles for his Jewish shops. But I will not be confused. Meanwhile, the shock troop does its job. Which they do perfectly. I instruct Wächter[13] in Berlin to have the synagogue in Fasanenstrasse smashed. He just keeps saying, "Honorable assignment."

S.S. swearing-in in front of the Feldherrnhalle. At midnight. Very solemn and atmospheric. The Führer speaks to the men. Going to the heart.

I want to go to the hotel, there I see the sky blood red. The synagogue is burning. Immediately to the Gau. Nobody yet knows anything there. We only permit to extinguish as far as is necessary for the surrounding buildings. Otherwise let it burn down. The shock troop does a terrible job. Messages are now coming in from all over the Reich: 50, then 7[5] synagogues are on fire. The Führer has ordered that 2[5]-30,000 Jews be arrested immediately. That will work. They should see that now the measure of our patience is exhausted.

Wagner is still a bit weak. But I will not let go. Wächter reports to me, command executed. We go with Schaub[14] to the Künstler (Artists) club, to wait for further messages. In Berlin 5, then 15 synagogues burn down. Now the peoples anger is raging. We can not do anything about it during the night. And I do not want to do anything. Let it run.

Schaub is in full swing. His old shock troops past is awakening.

When I drive to the hotel, window panes fly to pieces. Bravo! Bravo! The synagogues burn in all the big cities. German property is not endangered.

There is nothing special to do anymore at the moment. I try to sleep for a few hours.

The first reports arrive early in the morning. There was a terrible rage. As expected. The whole nation is in turmoil. That dead is proving costly for the Judaism. In the future the dear Jews will deliberate on simply shoot down German diplomats.

And that was it all about.

I still have a lot of work to do. Jannings[15] absolutely wants to save his movie. But I can not help him either.

The radio has risen to over 10 million listeners. A fantastic result, which is very pleasing.

I give instructions that, in the area of the whole Ministry, prohibitions may only be issued by me. Otherwise, too much nonsense happens.

For the 80th birthday of the emperor[16] people want to make commemorations and write articles of praise. I would agree, if the side against the emperor could speak too. But then the reactionaries twitch back.

Roosevelts friends are beaten in the American elections in many places. Strong success of the Republicans. But that still does not say anything against Roosevelt himself.

London drops partition of Palestine. The English wont get away with that anyhow.

Speech of the Führer in Bürgerbräu encounters a very aggressive echo in London and Paris. That was to be expected. If you tap the warmongers fingers, they will scream.

I think with the Führer about our measures to take now.

Let them go on smashing or stop it?

Yesterday: Müller[17] reports on the occurrences in Berlin. It was really great there. Constantly new fires. But its all right like that.

I draft an executive order on the conclusion of the actions. It is just enough by now. If we let this go on then there is a danger that the mob will appear. The synagogues burned down all over the country. Judaism must pay dearly for this dead.

In the Osteria I report to the Führer. He agrees with everything. His views are quite radical and aggressive. The action itself went perfectly. 17 dead.[18] But no German property damaged.

With minor changes, the Führer approves of my decree concerning the termination of the actions. I will issue it right away by press and radio. The Führer wants to take very sharp measures against the Jews. They will have to repair their shops themselves. The insurances will pay nothing. Then the Führer wants to gradually expropriate the Jewish business and give the holders papers in exchange which we can devalue at any time. By the way, the country is already helping itself in that respect with its own actions. Ill give out appropriate secret decrees for this. We are now awaiting the effects abroad. For the moment, they are still silent there. But the noise surely will come.

Kemal Atatürk has died.[19] A great man passed away. Mainly probably by own lack of restraint. But I think thats no harm to us. But Turkey is therefore virtually leaderless.

In the hotel further work. I send around some more orders. With that I believe the action with the Jews is over for now. If there will not be some aftermaths.

The Jews are very stupid in the end. And they have to pay their own mistakes dearly.

Still working until the evening. Reports coming in from Berlin about very serious anti-Semitic riots. Now the people is taking action. But now it must be stopped. I issue instructions to police and party in this sense. Then everything will be quiet.

Later sat together with the journalists for a long time. The Führer elaborates on the Czechs crisis, lashes out against the cowardice of the intellectuals, speaks very openly about Hungary, characterises very clearly the English poker and provides thus a great overview of the whole international situation.

At midnight I have to go back to Berlin.

The foreign stations report objectively about the anti-Semitic actions in Germany.

Now I am going to take over the whole power for Berlin myself. In times of crisis, one must be the boss.

front
Largest Soviet ground formation. It was attached to a certain area which gave its name to the units involved. For instance the Voronezh front.
Führer
German word for leader. During his reign of power Adolf Hitler was Führer of Nazi Germany.
Gau
Shire. District in the Third Reich established by the NSDAP.
Gauleiter
Leader and representative of the NSDAP of a Gau.
Gestapo
Geheime Staatspolizei. Secret state police, the secret police in the Third Reich.
Jews
Middle Eastern people with own religion that lived in Palestine. They distinguished themselves by their strong monotheism and the strict observance of the Law and tradition. During World War 2 the Jewish people were ruthlessly persecuted and annihilated by the German Nazis. . An estimated 6,000,000 Jews were exterminated.
Kristallnacht
The night of 9-10 November 1938. Over 250 German synagogues were destroyed. Tens of thousands of Jews were arrested.
marshal
Highest military rank, Army commander.
propaganda
Often misleading information used to gain support among supporters or to gain support. Often used to accomplish ideas and political goals.
revolution
Usually sudden and violent reversal of existing (political) the political set-up and situations.
synagogue
Jewish house of prayer.