Some short statements by Karl Dönitz about Hitler's death and the German capitulation. Dönitz was commander-in-chief of the Kriegsmarine from 1943 until the end of the war. He was appointed by Hitler in his will as his successor as Chancellor. In May 1945 Dönitz's headquarters were in Flensburg. 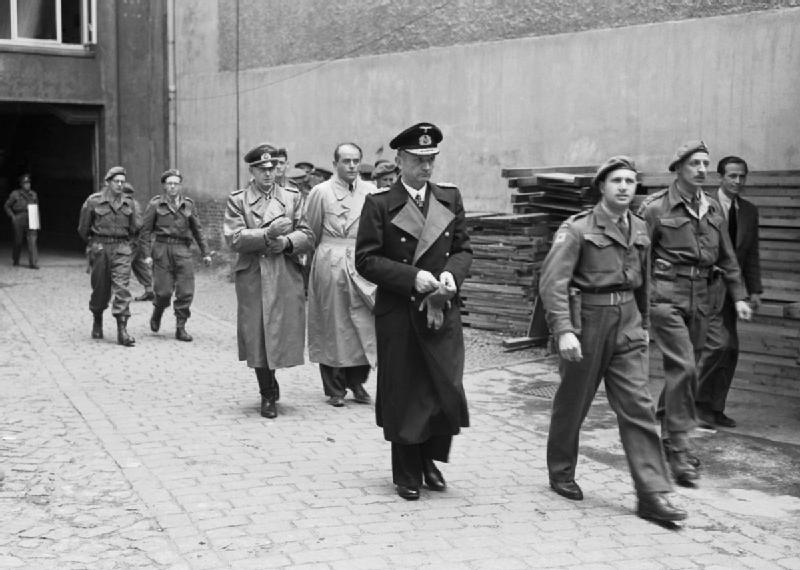 Karl Dönitz during his arrest by the British in Flensburg, 23 May 1945. Also Alfred Jodl and Albert Speer are depicted. Source: Imperial War Museums

German men and women, soldiers of the German Wehrmacht!

Our Führer, Adolf Hitler, has fallen Early on he discerned the terrible danger of Bolshevism At the end of his struggle and his unerring, straight Lize, is his heroic death in the capital of the German Reich. His whole life was dedicated to serve Germany. His engagement in the fight against the Bolshevik storm surge was beyond Germany for Europe and the entire civilized world.

The Führer chose me as his successor. Conscient of this responsibility, I take over the leadership of the German people in this fateful hour. My first task is to save German people from annihilation by the advancing Bolshevik enemy. Only for this purpose the military struggle will continue. As far as and as long as the achievement of this goal is hindered by the British and Americans, we will also continue to defend ourselves against them and have to continue to fight. The Anglo-Americans then no longer continue the war for their own peoples, but only for the spread of Bolshevism in Europe.

What the German people accomplished in fighting this war and endured at home is historically unique. In the coming time of our peoples hardship, I will endeavor to create bearable living conditions for our brave women, men, and children, as far as I have the power to do so. For all that, I need your help. Give me your trust, because your way is also my way. Keep order and discipline upright in town and country, do each your duty at your place! If we do what we can, God will not leave us after so many sorrows and sacrifices.[1]

Dönitzs order of the day to the German armed forces on May 1, 1945

The Führer appointed me as his successor as Head of State and Supreme Commander of the Wehrmacht. I take over the command of all parts of the German Wehrmacht with the will to continue the fight against the Bolsheviks until the fighting troops and until the hundreds of thousands of families of the German Eastern Territories are saved from enslavement or extermination. Against the English and Americans, I must continue the struggle as far and as long as they prevent me from carrying on the struggle against the Bolsheviks.

I demand discipline and obedience. Only by unconditional executing of my orders chaos and destruction will be avoided

The oath of allegiance you once made to the Führer, by now applies to me as the successor appointed by the Führer, for each and every one of you without further ado.

German soldiers, do your duty. It is about the life of our people.[2]

Radio station Flensburg: Speech by Grand Admiral Dönitz on the surrender of the German Reich, May 8, 1945

German men and women! In my speech on May 1, in which I informed the German people of the death of the Führer and my appointment as his successor, I described it as my first task to save the lives of German people. In order to achieve this goal, on the night of May 6 to 7, I ordered the Wehrmacht Supreme Command to declare unconditional surrender of all fighting forces on all battlefields.

On May 8, at 11 p.m., the weapons are silent. The soldiers of the German Wehrmacht, who have proven their worth in countless battles, take the bitter road to captivity and thus make the final sacrifice for the lives of women and children and for the future of our people.  We have to face the facts clearly. The foundations on which the German Reich was built have fallen apart. The unity of state and party no longer exists. The party has resigned from the scene of its effectiveness.

With the occupation of Germany the power lies with the occupying powers. It is in their hands whether or not I and the government appointed by me can operate. If through my official activity I can benefit and help our fatherland, I will remain in office until the will of the German people can be expressed in the appointment of a head of state, or if the occupying powers make it impossible for me to continue my official duties. For only the love for Germany and the duty hold me on my difficult post.

We all have a difficult road ahead. We must go it in the dignity, courage and discipline that demands the memory of our fallen from us. We must go it with the will to push all of our work and performance without which we cannot provide for our livelihood. We want to walk it in the unity and justice without which we can not overcome the misery of the coming time. We can hope that our children will have a free and secure existence in a peaceful Europe. I do not want to stay behind you on this thorny path. If it is my duty to remain in office, I will try to help you as much as I can.

If it is my duty to leave, then this step too should be a service to people and Reich.[3]

capitulation
Agreement between fighting parties concerning the surrender of a country or an army.
Führer
German word for leader. During his reign of power Adolf Hitler was Führer of Nazi Germany.
Kriegsmarine
Germa navy. Part of the Wehrmacht next to Heer and Luftwaffe.
Wehrmacht
German armed military forces, divided in ground forces, air force and navy.