The Supreme Order of the Chrysanthemum (大勲位菊花章, Dai-kun'i kikka-shō) is Japan's highest order. The Grand Cordon of the Order was established in 1876 by Emperor Meiji of Japan; the Collar of the Order was added on 4 January 1888. Unlike its European counterparts, the order may be conferred posthumously. 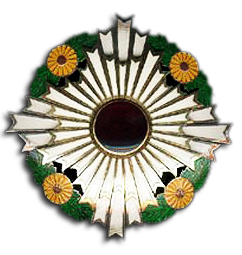