WWII specialist Kevin Prenger wrote: 'A Judge in Auschwitz' about SS judge Konrad Morgen. In 1943, this judge paid a visit to concentration camp Auschwitz in order to investigate malpractices in the camp  as strange as it may sound. The occasion was a parcel, sent from the camp and containing chunks of gold and which was intercepted by customs. In the camp, Morgen discovered this smuggling affair was the tip of an iceberg: camp guards in their masses were guilty of theft and corruption. Whereas in the gas chambers of Nazi-Germany millions of Jews are being killed, Morgen is engaged in gathering evidence of 'illegal' murders. The Dutch History website Historiek.net questioned author Kevin Prenger about his remarkable book. 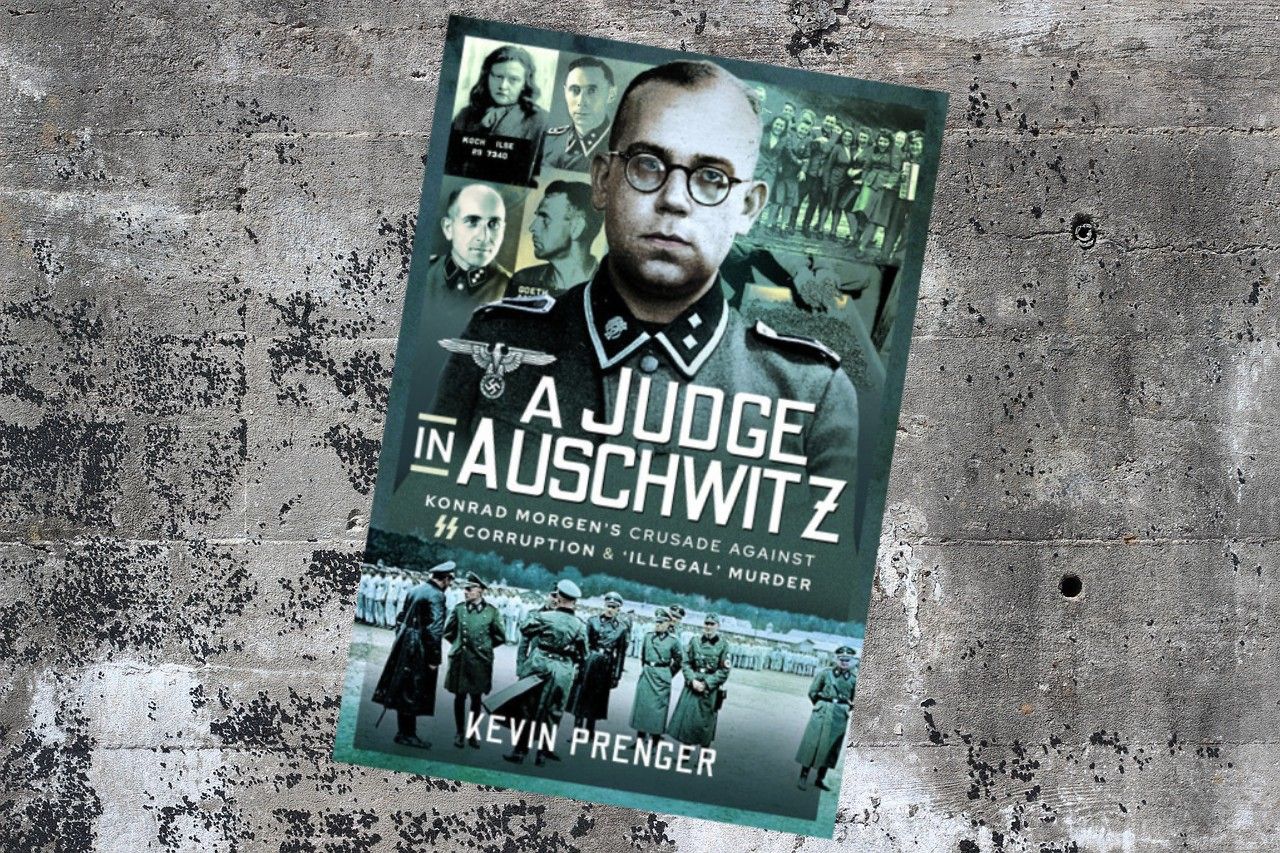 You wrote a book about a German judge who investigated malpractices in Auschwitz. Regarding the vast number of crimes that were committed there, this seems a little odd. How serious was Konrad Morgen' s investigation?

The investigation into crimes in Auschwitz, conducted by Konrad Morgen was launched in the fall of 1943. Six months before, he had already been sent to concentration camp Buchenwald near Weimar by SS leader Heinrich Himmler in order to investigate indications of fraud by the leadership of the camp. He discovered that camp commander Karl Koch and other members of the staff were guilty of serious corruption. Koch for instance had blackmailed inmates by threatening them with corporal punishment and had them pay for their release. Heinrich Himmler vehemently rejected that kind of self-enrichment because members of his SS were expected to serve only the interests of the Führer and of the Nazi state. As a result of this investigation by Morgen, Koch was sentenced to death by an SS court and executed on April 5, 1945 by an SS firing squad.

Morgen's investigation into corruption covered several camps, including Auschwitz. Here, the camp staff mainly enriched itself with the possessions of the Jews who were being gassed by their masses in the camp. Morgen mainly managed to get lower ranking camp guards sentenced but he failed for instance to get camp commander Höss prosecuted.

Leaders of other camps were punished though but in many cases, Himmler had them transferred to the front instead of serving their sentence. Hence you can't say Morgen's investigations were just for kicks because some employees of the camps were actually punished but his work was mostly intended to combat greedy camp employees and not to protect inmates.

How did you get to this subject?

While reading books about the Holocaust, I sometimes came across Konrad Morgen. I found it intriguing that within a criminal organization such as the SS something like justice did exist. Most remarkable was Morgen's investigation into 'illegal' murders in the camps. In places where inmates died like flies from maltreatment, exhaustion and diseases and where in Auschwitz, some one million Jews were being systematically murdered in the gas chambers, there was someone around who was engaged in murder investigation. After the war Morgen himself claimed he had prosecuted members of the camp staff in order to stop the mass murders, something which was believed by American historian and Hitler biographer John Toland. He considered the SS-judge a forgotten hero. This claim seemed interesting enough to me to investigate further. I saw similarities with Kurt Gerstein, the SS officer who attempted to alert the world to the Holocaust but who at the same time was involved in the delivery of the Zyklon-B gas used in the Auschwitz gas chambers. Earlier on, I wrote a book about him 'The Messenger from Hell'. Was Morgen just like Gerstein someone who came in conflict with his conscience and attempted to do something against this gross injustice?

How did Morgen distinguish between illegal and legal murders?

'Illegal' murders were those for which no permission was given by higher up. In Auschwitz for instance there were camp employees who maltreated inmates, often resulting in death without official orders. In Buchenwald, Morgen discovered that Koch had inmates killed so they couldn't testify against him, making these murders 'illegal' as well. This definition didn't cover the mass murder of the Jews as Hitler had ordered this. Orders by or on behalf of Hitler were the law in Nazi-Germany. Hence, it was possible that Morgen conducted investigations into murders committed by camp guards on their own initiative while on the other hand the mass murder continued uninterrupted. Sourly enough, this train of thought was adopted during the post-war cases against Auschwitz camp employees in Frankfurt am Main in the sixties. Morgen testified then that the gassing of Jews was 'simply following orders' but executions were also carried out on personal initiative.

Partly based on Morgen's information, camp guards Wilhelm Boger and Joseph Klehr were pronounced guilty of multiple cases of murder on their own initiative and were sentenced to life imprisonment. Camp guards who had been involved in the mass murder but weren't guilty of individual crimes, got away with far lighter penalties.

How did Konrad Morgen get into the SS and was he a convinced anti-Semite?

In his own words, Morgen ended up in the SS almost automatically. He was a member already of a National socialist sports movement and following the seizure of power by the Nazis in January 1933 he was automatically taken up in the Allgemeine-SS. I think though he enrolled voluntarily regarding his career opportunities. He studied law and, being the ambitious lawyer he was, he could forget about a career in Germany if he didnt join the Nazis. Shortly after his appointment in the SS, he enrolled in the Nazi party. I failed to find any proof of sympathy with the anti-Semitism of the party although he never spoke against it in public. His support of the Nazis though was stronger than he admitted after the war. In a book he wrote in 1939 about war propaganda and the prevention of war, he rejected pacifism and made a plea for the Nazi movement that in his view, would save the nation by hard work  not by war. He wasn't a fanatic Nazi either but more of an opportunist. Yet again, he was no uncritical peddler. Because of his sense of justice, he often came into conflict with those in power. During his career he was fired twice for marching out of step. Once, Himmler would even have threatened to lock him up in a concentration camp. Hence, Konrad Morgen is a person you can't label easily and that makes him so interesting to me.

What was Morgen's motivation to lay the behavior of camp guards under the microscope?

In my opinion a combination of ambition, a sense of duty and of justice. In his report about the corruption in Buchenwald, you can read a genuine condemnation of how camp inmates were being maltreated. It went straight against his sense of justice that German citizens, without any form of trial, were being subjected to the whims of sadistic guards in a concentration camp. Apart from that, he just did what he had to do, just like men such as Adolf Eichmann and Rudolph Höss did. At the end of the day, he was a functionary, a part of the criminal system and certainly no independent 'crime fighter' engaging Nazi criminals on his own.

By fighting corruption he even contributed to the fact that money and other valuables didn't end up in the pockets of camp guards but in the treasury of the state. A plea in his favor is that he seems never to have been guilty of self-enrichment or maltreatment of inmates. In that sense, he was an exception in the corrupt world of the concentration camps. Hitler himself though, has never been guilty of self-enrichment or maltreatment so that doesn't exonerate Morgen in any way.

How was Konrad Morgen judged after the war?

After the war, he was subpoenaed twice by a so-called Spruchkammer, a court which specialized in denazification cases in post-war Germany. Nazi criminals and their henchmen had to be separated from the Mittläufer (peddlers) and insignificant party members. The first time, Morgen managed to convince the court that during the war he had only acted to protect inmates against violent camp guards and he was acquitted as some sort of resistance fighter. The second time, he was designated a Mittläufer, someone who followed the Nazis but wasn't guilty of Nazi crimes himself. Three times, the German judiciary opened a criminal case against him but he was acquitted every time. Hence, Morgen was never pronounced guilty oof Nazi crimes.

Initially he was given a hero status as mentioned before but today, that opinion isn't shared most of the time. Morgen is often considered a cog in the system, a willing follower of Hitler. In my view, this opinion doesn't quite justify his role, although it is closer to the truth than John Toland's version. Even though Morgen attempted to introduce some justice in the camp system, within the rotten Nazi state, this was unachievable.