"With trivializing remarks, we will not achieve a better understanding of the Dutch resistance"

TRANSLATED BY FERNANDO LYNCH  The British publisher Osprey Publishing published a book on resistance and collaboration in the Netherlands this spring. The authors are the Dutch friends Michel Wenting and Klaas Castelein. The title is "The Dutch Resistance 1940-45, World War II Resistance and Collaboration in the Netherlands. The richly illustrated publication, with drawings by Mark Stacey, is the 245th volume in the publisher's Elite series. We asked the authors some questions about their book via e-mail. 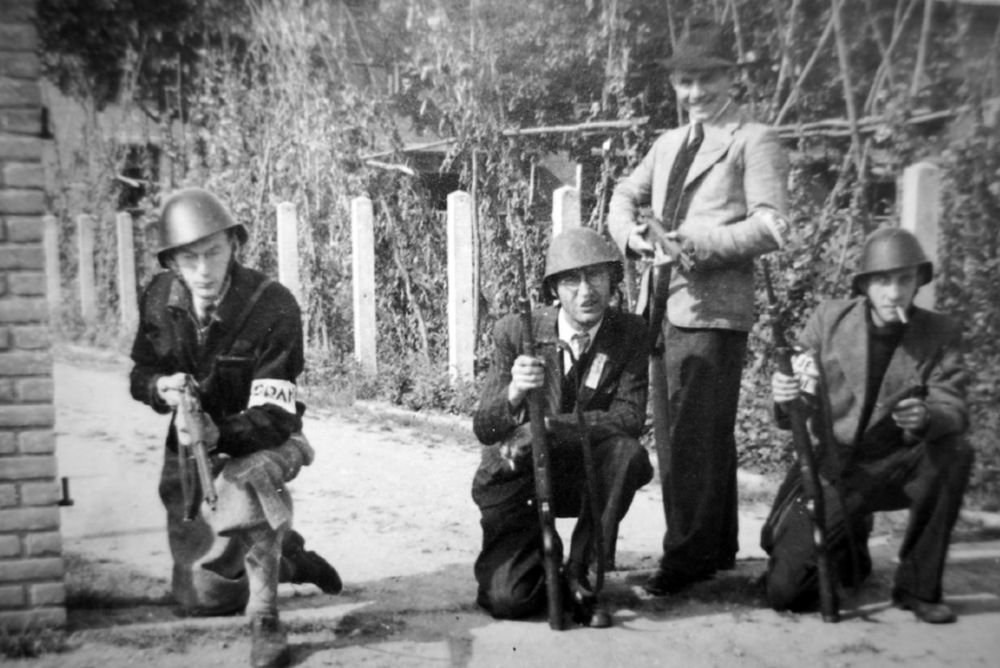 Michel Wenting's (1965) interest in World War II was sparked by the stories of his parents, who were in their twenties during the war. Both of them have so consciously experienced the war in all its facets. For example, Johanna Katz, a Jewish friend of his mother's, along with her parents, was assassinated in the Auschwitz extermination camp on the day they arrived in 1942. There was no way for them to escape deportation by going into hiding. Michel's father was actively involved with the Red Cross in Doesburg. In doing so, he cared for the wounded and salvaged the dead. This casualties were a result of Allied bombing and the fourteen-day Siege of Doesburg, from April 2nd to 16th, 1945, by alternating Canadian and British forces. He was also involved in the evacuation and care of Dutch forced laborers from the Rees labour camp in Germany.

As for the resistance, the stories have been about and by Michel's great uncle, a cousin of his mother, Antoon Helmes. His first acts of resistance were cutting the power supply to German searchlights in the (border) municipality of Bergh. In Zeddam, Antoon, together with several friends, including Dominicus Ettema, founded a resistance group in support of people in hiding, which from 1943 became part of the Cappetti Group, and thus of the National Organization for the Assistance of People in Hiding (LO). They provided food and voucher cards for people in hiding, which were obtained, mainly by raiding distribution offices. The group also arranged counterfeit papers, stamps, and distribution cards and infiltrated various organizations and government services in the municipality of Bergh. On June 14th, 1944, Ettema was arrested by the Sicherheitsdienst (SD). This arrest was the direct result of an earlier arrest of a large number of members of the Capetti Group. In the course of this, incriminating material was seized, from which the SD was in all likelihood able to deduce that Ettema was the local head of those going into hiding" in the LO. Via Arnhem and Polizeiliches Durchgangslager Amersfoort, he ended up in Neuengamme concentration camp where he died on January 11, 1945. Antoon survived the war and was commander of the Dutch Domestic Forces (NBS) in Zeddam in April 1945.

Hielke and Gelske Brouwer were the great-grandparents of Klaas Castelein (1983) on his mother's side. Hielke became involved in resistance activities at an early stage of the occupation, including the distribution of illegal literature. Eventually, he turned his attention primarily to helping people in hiding, especially Jewish compatriots. An article in the Leeuwarder Courant estimated that Hielke and his wife Gelske brought more than a hundred Jews to safety. In 1970 they were honored with the Yad Vashem award for their past efforts. As head of the LO in the municipality of Achtkarspelen, Hielke was therefore mainly engaged in nonviolent resistance. However, as the Canadians approached, he also joined the Achtkarspel group as a commander of the NBS. This group succeeded in capturing the bridge at Blauwverlaat from the Germans in April 1945 and kept it intact for the Canadians, after which they were able to effortlessly advance northwards to Dokkum.

How did you get the idea to write this book and why did you want to publish it in English with Osprey Publishing?

We belong to the same group of friends who visit former battlefields and war museums with some regularity. In the summer of 2019, we visited a private war museum in Doesburg, where Michel was born and raised. At the time, we were saying to each other that a lot of literature had already been published about the resistance in the Netherlands, though in Dutch. Relatively little had been published in English about the Dutch resistance. When we realized this knowledge gap, we decided to write an English-language book about the Dutch resistance. Since we both have a great passion for military history and militaria, we decided to focus on the armed resistance in the Netherlands. Osprey Publishing is a well-known publisher in the field of military history. This publisher had already published many books on the various armed forces that served during World War II, but nothing yet on armed resistance fighters in the Netherlands. So, when we sent in a synopsis, Osprey immediately responded with enthusiasm. 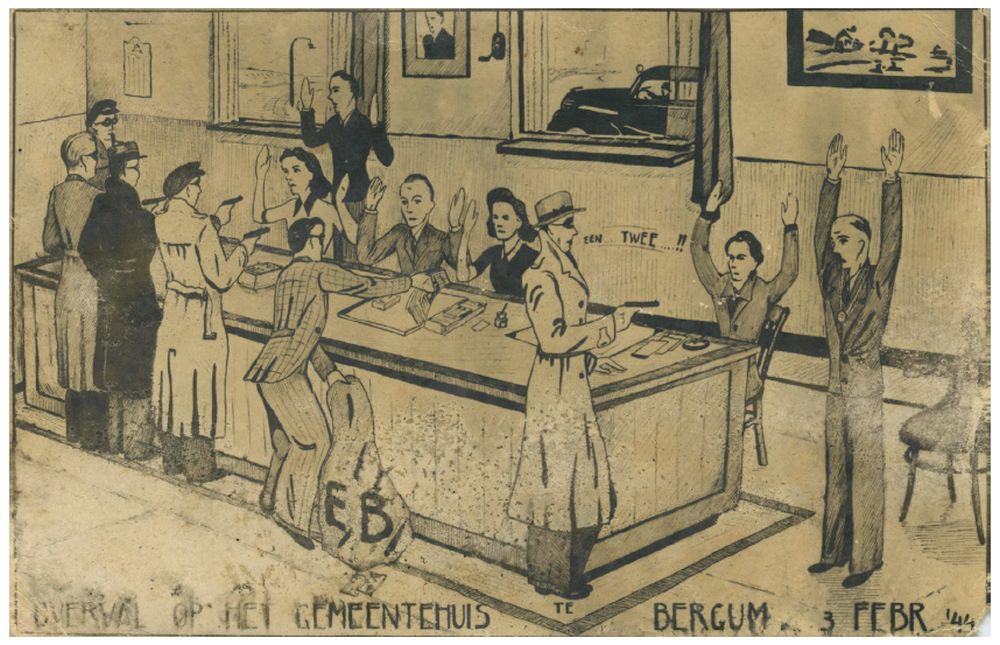 Drawing of the KP raid on the municipal hall at Bergum in Friesland, early February 1944. Source: Beeldbankwo2.nl / NIOD & Fries Verzetsmuseum

What was your task assignment while researching and writing? Was this your first joint publication and how do you look back on the collaboration?

This was our first joint publication and we look back on our collaboration with a positive and fulfilled feeling. It was very inspiring to work together on this product. Whenever Michel came across a new insight, he immediately shared it with Klaas and the other way around. This created a synergy in which we constantly exchanged ideas about how to interpret certain events and new insights. We are both familiar with the subject matter covered in our book. However, we both have an affinity for other sub-topics. As an Achterhoeker, Michel took on the subject of the Dutch National Battalion (DNB), a group of resistance fighters and those in hiding from Aalten who joined the advancing Canadians. Klaas is of Frisian descent and provided the passage on the liberation battles in Friesland in April 1945. We reviewed each other's work and the chief editor in England went through the entire text one more time, so it becomes one.

Books published in Osprey Publishing's Elite series have a particular format, with a prominent place for drawings of combatants in their uniforms or attire with distinctive weapons and identifying marks. The illustrator is Mark Stacey. How did you instruct him, and was it difficult to characterize members of the Dutch resistance, who, after all, did not all wear the same thing?

Mark Stacey is a fantastic illustrator to work with. He can draw incredibly well. You can almost feel the fabric of the clothing worn by the figures. In total, our book has 21 figures, including 11 fascists and collaborators and 10 resistance figures. Our book also contains one plate with eight different resistance armbands. It took much time and effort to reconstruct each figure and compile inputs for each figure. Each figure is based on at least ten pages of reference material. In total, the reference material counted no less than 168 pages for the illustrator. We not only described each piece of clothing, but also gave contextual information to the illustrator and also made suggestions for the physical appearance, facial expression, and body posture of each figure. Klaas used to do a lot of cartooning and made cartoon-like drawings for most of the figures to best convey to the illustrator the image we had in mind. Although we never met him in person, Mark Stacey had an incredible sense of what each figure should look like.

Characterizing members of the Dutch Resistance was not so much a difficulty as it was a "sport" to dig up as much reference material as possible. At the National Military Museum (NMM) in Soesterberg, for example, we had an armband and shoulder titles lifted from the archives that had been worn by an NBS commander. The NMM sent us photos of the objects with their measurements. That gave us a thrill. 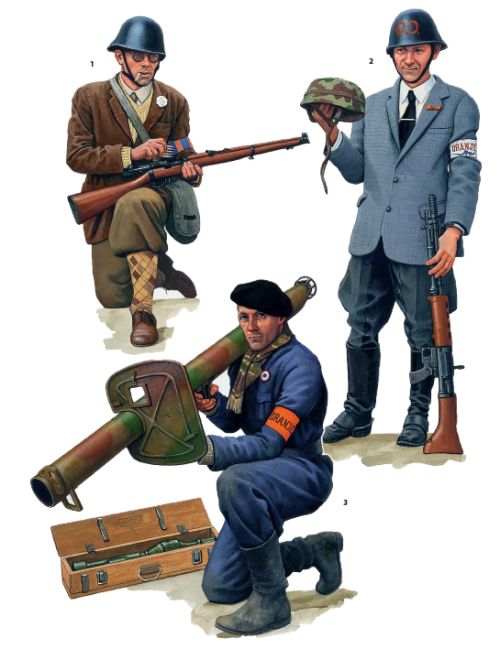 Illustration by Mark Stacey excerpted from the book. Depicted are: 1) university student from Delft with the NBS, May 1945. 2) Member of the Order Service of the NBS in Heerlen, February 1945. 3) Fighter of the NBS in the northern and eastern provinces of the Netherlands, April 1945. Source: Osprey Publishing

Besides the resistance, your book is also about collaboration. You describe various Dutch National Socialist organizations, including the inevitable NSB, as well for instance the Dutch Labor Service and the Landwacht. How do you view the extent of collaboration in the Netherlands?

The extent of collaboration in the Netherlands is unquestionably significant. Well known is the proportionately large number of Dutchmen who voluntarily joined the Waffen-SS. German sources reached a total of as many as 50,000; more realistic is the number of 23,000 that N.K.C. in 't Veld determined based on thorough archival research. Furthermore, many thousands of Dutch nationals served in various services of the German occupiers, such as the Nationalsozialistisches Kraftfahrkorps (NSKK), the Wachtdienst (an initially private security organization that later became part of the Wehrmacht), the Kontroll-Kommando (KK) in charge of guarding especially, but not exclusively, Camp Erika in Ommen, the Kriegsmarine, the Wassershutzpolizei, the Luftwaffe (Flakhelfer, Blitzmädel, and other functions) and the German Red Cross. Because of the necessarily limited scope of our book, we have been able to discuss only some of the aforementioned organizations. There were also Dutch organizations serving the German occupiers, such as the governing body (on local, provincial, and national levels), the police (only ten percent of the police force was involved in the resistance in some way), the Dutch Labor Service (NAD), and the Landwacht. Nor was there room in our book for the many socioeconomic organizations on a National Socialist basis.

In your opinion, is there enough attention in the Netherlands to the achievements of the resistance? Could you both name a person or act of resistance that you have particularly highlighted in this book?

We think that with time a more nuanced picture has emerged regarding the resistance. Yes, it was relatively small-scale, but trivializing remarks such as "The resistance was nothing," or "The resistance was one big mess, wasn't it?" do not help us to understand the resistance better. There were indeed people who dared to fight the Nazi regime and thus became a source of hope and inspiration for others. Yes, the armed resistance took rash actions that were even counterproductive, but that does not alter the fact that successful raids were carried out elsewhere in prisons and town halls. Yes, during the liberation days many opportunistic "Maybugs" joined the NBS and many NBS members became involved in senseless shootings and the mistreatment and torture of (alleged) collaborators. At the same time, some NBS groups made a valuable contribution to the liberation of the Netherlands, capturing and occupying important strategic points for the advancing Allies. In short, the story of the armed resistance in the Netherlands provides a very fragmented picture and we have tried to reflect that in our book. 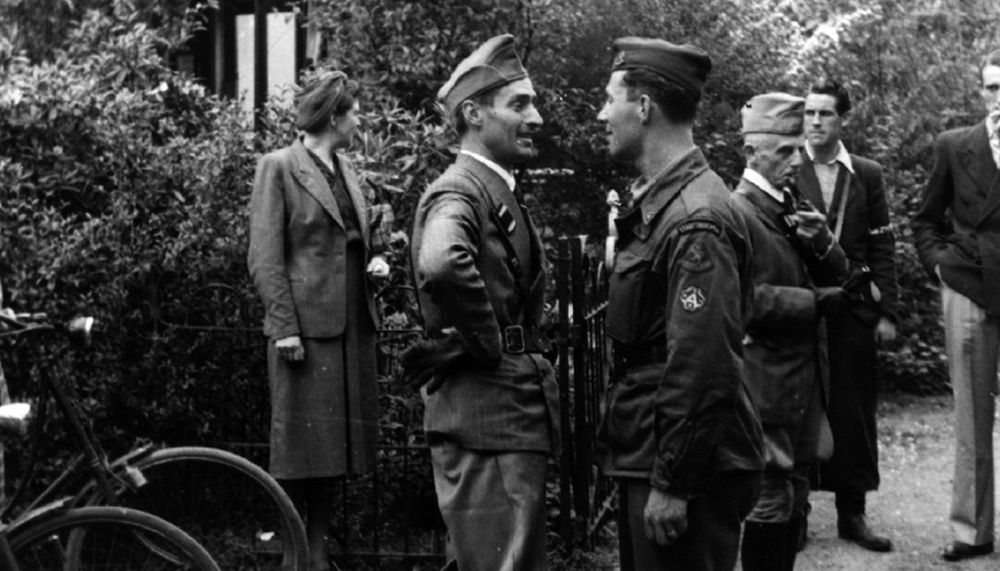 In the foreground left an NBS commander in consultation with a soldier of the Limburg Stoters dressed in American uniform. Source: NIMH

One of the many acts of resistance that we have highlighted in our book is the successful raid on the House of Detention in Leeuwarden. On December 8, 1944, 25 members of the Frisian Knokploeg (KP) succeeded in freeing 51 prisoners from this prison without firing a shot. This action, which was led by KP leader Piet Oberman (alias "Piet Kramer"), was extremely carefully prepared.

The Dutch Resistance 1940-45
World War II Resistance and Collaboration in the Netherlands
ISBN: 9781472848024
More information about this book 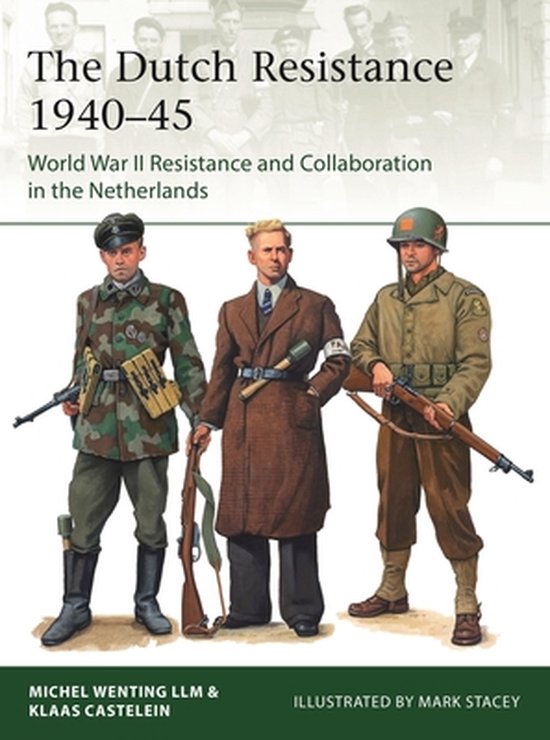