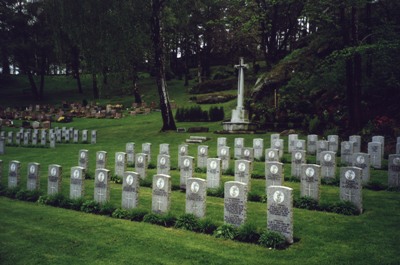 Although Sweden remained neutral throughout both world wars, a number of Commonwealth servicemen lie buried in her cemeteries and churchyards. The Second World War graves are mostly those of airmen who failed to return from bombing raids over Germany or German occupied territories.

Many casualties of the First and the Second World War were buried in isolated and inaccessible locations and in 1961, the Gothenburg Church Commission made land available for a war graves plot in Kviberg Cemetery, which allowed these graves to be relocated.

Three further burials were made in the plot in 1976, when a crashed aircraft, buried in snow in Lapland since 1942 was discovered during a thaw.

The Commonwealth plot in Kviberg Cemetery in Göteborg now contains 68 burials of the First World War, 30 of which are unidentified. Second World War burials number 46, 11 of them unidentified.