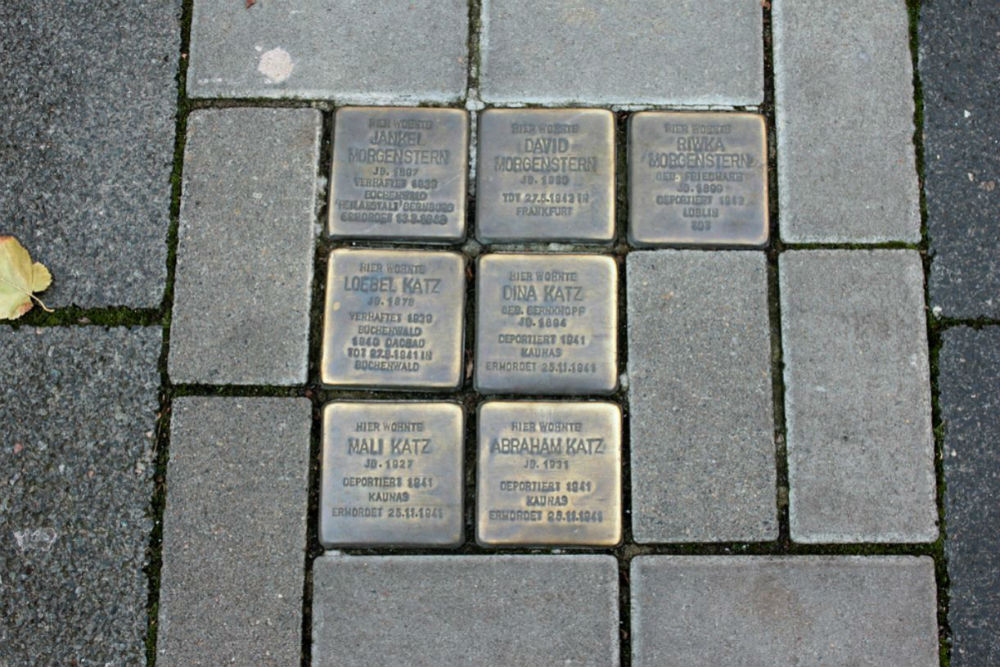 Jankel Morgenstern, born in Poland, moved to Frankfurt as a child in the early 1900s. He became a merchant and married Rowka Friedmann in 1925. They had two sons  Felix born in 1926, and David born in 1930. Riwka operated a clothing shop from 1928-1930. The family of four were deported to the Polish border on 28 October 1938. They were now considered stateless, and Poland refused them entry. They returned to Frankfurt and lived at this location. The next July, Felix was sent on a Kindertransport to Britain. In September, Jankel was taken in "protective custody" and was put into Buchenwald. On 13 March 1942, he was sent to a mental institution, Bernburg, and murdered in the gas chamber there the same day. How Riwka and David died is uncertain. One source claims David, age 12, committed suicide 27 May 1942 in Frankfurt, two weeks after his fathers death; another claims that is unlikely. It is possible that Riwka was alive that May because both father and son were buried in the same cemetery. If she was alive, her deportation to Lublin likely occurred in June, and she might have have been murdered in Sobibor. Felix joined a Scottish regiment, changed his name to George Melvin, fought for Britain in the war, then emigrated to the US. His son, David Melvin from the US, attended the 2008 ceremony to lay these Morgenstern stolpersteine.

Loebel (Löbl) Katz was a Polish citizen, born in the town of Auschwitz. He moved to Frankfurt in 1910. He married Dina Bernknopf (also called Dina Goldfinger) in 1928. This was probably his second marriage. He was a merchant who worked in a variety of occupations including trading in soap, trading in chocolate, picture framing, and art. Then he was arrested several times. The first arrest in Octoer 1938 resulted in his deportation back to Poland as part of the "PolenAktion." He returned to Frankfurt. In June of 1939, he filed a petition to ship his goods to Britain; it was approved, but he did not emigrate. His arrests in September and October 1939 led to his imprisonment in Buchenwald. In October 1940 he was sent to Dachau. Then the next year was returned to Buchenwald, where he was killed a month later. His wife Dina Katz and two sons Abraham and Mali were deported together from Frankfurt in October 1941 and were killed three days later in Fort IX, Kaunas (Lithuania), along with 2,931 other Jews that day. Fort IX was the site where approximately 40,000 Jews were executed at shooting pits.

For more information and pictures, please visit Stolpersteine Frankfurt am Main (in German). Go to: Stolpersteine in der Innenstadt, Fischerfeldstraße 16.