It was the pocket battleship "Admiral Scheer" which sank the British cargo steamer "Clement" in the South Atlantic on September 30. This news was established when the "Clement's" master, Capt. F. C. P. Harris, eventually arrived in London, and his story as reported in the "Daily Telegraph" is given below.

Capt. Harris, who was accompanied by the chief engineer, Mr. W. Bryant, stated. "That when making for Bahia, Brazil, he saw a battleship a long way off. When she was between four and five miles away a seaplane took off from her. The 'plane circled over us", he continued, "and, without any warning, spattered the bridge with machine-gun fire. Then I knew that she must be a German raider.

"Three times the 'plane circled round us, sending machine-gun bullets into the bridge at each turn. I do not know how I escaped, but the only one hit was my chief officer. He was slightly wounded in the hand.

"Believing that we would be shelled I ordered my crew of fifty to the boats, and had gone into one myself when a picket boat from the German battleship came alongside. They told me and Mr. Bryant to get into the picket boat, and our boats were allowed to go.

"The Germans then carried a number of bombs from the picket boat on to the 'Clement', but for some reason they did not explode.

"We were taken on board the battleship, and I recognized her at once as the 'Admiral Scheer'.

"When the bombs failed to explode, the 'Admiral Scheer', sank the 'Clement' by shell fire from about a mile off. We were quite well treated while on board her. We were asked to give our word of honour that we would not attempt sabotage or espionage, but, strangely enough, they did not ask us any questions, and I said very little.

"We were only five hours on board the 'Admiral Scheer'. They then overtook the Greek vessel 'Papalemos', 3,748 tons, and transferred us to her."

Capt. Harris and Mr. Bryant were landed at St. Vincent, and after seventeen days' wait there were taken to Le Havre by a Dutch boat. The "Clement's" crew was landed in Brazil.

As was later published, the "Clement" was not sunk by the "Admiral Scheer", but by her sister ship, the "Admiral Graf Spee". Which in turn was later sunk during the Battle of the River Plate.

The Battle of the River Plate 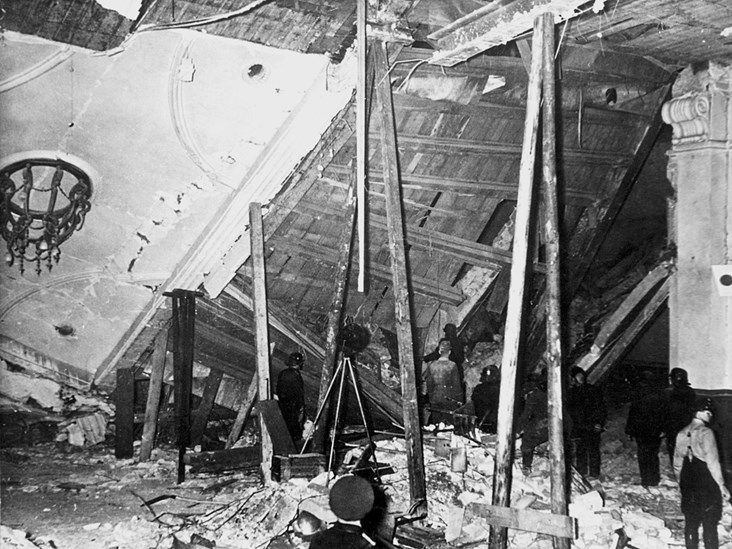 I Was There! - We Were On the Mined 'Simon Bolivar'

One of the most shocking tragedies of the War occurred on November 18th 1939, when the Dutch liner "Simon Bolivar" struck a German mine in the North Sea, and sank with the loss of over 120 lives, incl

Your Peace, she never came of age, That Peace you bought with bitter price; Nor now survives in this dull rage One sign of all your sacrifice. Your sons must arm again to do What all you, dying