WITH the rapid advance of General Rommel's forces over the Egyptian frontier and past Mersa Matruh, the idea seems to have arisen in many minds that our fleet in the Eastern Mediterranean would have no alternative but to retreat at once through the Suez Canal into the Red Sea.

In fact, this by no means follows in such event. Should the invaders reach Alexandria it would deprive the fleet of its principle base, and most of the extensive resources that have been concentrated there. Nor is there another port available which can compare with Alexandria so far as strategic position and harbour facilities are concerned. Port Said might be a useful substitute, were it not for the obvious fact that, with Alexandria in enemy hands, a position only 145 miles away would soon become untenable. It may be assumed, therefore, that the bases from which our warships would continue to operate would be Haifa and Beirut, the principle ports of Palestine and Syria.

Haifa is quite a modern city, with a harbour on which large sums have been spent in recent years. Beirut, though much older, has been improved considerably under the French regime in Syria. Cruisers and destroyers could make good use of both ports.

ANOTHER problem which has aroused public anxiety is the fate of the French squadron laid up at Alexandria. This comprises the old battleship Lorraine, of 22,198 tons displacement, armed with eight 13.4-inch guns; the heavy cruisers Suffren (9,938 tons), Duquesne and Tourville (both 10,000 tons), all three armed with eight 8-inch guns; the cruiser Duguay-Trouin, 7,249 tons and eight 6.1-inch guns; the destroyer Basque, Forbin and La Fortuné, each 1,378 tons, four 5.1-inch guns and six torpedo tubes; and the submarine Protée, 1,379 tons, one 3.9-inch gun and eleven torpedo tubes.

It was in the first week of July 1940 that an agreement was reached between Admiral Sir Andrew Cunningham, Commander-in-Chief of the Mediterranean Fleet, and Admiral Godfroy, commanding the French squadron at Alexandria, by which the latter force was immobilized. All ammunition, torpedo warheads, breech-blocks of guns, and oil fuel were landed, with the exception of small parties of shipkeepers.

In the event of Alexandria being endangered there is no doubt good care would be taken to ensure that those French ships should not fall into enemy hands. Presumably they could be taken through the Suez Canal to some safe port a considerable distance away; indeed, the naval base at Diego Suarez, Madagascar, occupied by British forces last May, has been mentioned in this connexion. Failing their removal, it may be regarded as certain that steps would be taken to render the ships useless to the Germans or Italians, i.e. they would be blown up or sunk if that became necessary.

CASUALTIES suffered in the convoy actions in the Central Mediterranean in the middle of June comprised a cruiser and six destroyers, the names of which have now been released. They were H.M.S. Hermione, a cruiser of 5,450 tons launched in 1939, and armed with ten 5.25-inch "dual-purpose" guns; and the destroyers Bedouin, 1,870 tons; Nestor, 1,690 tons; Hasty, 1,350 tons; Airedale, Grove and Kujawiak, each of 904 tons. The Nestor belonged to the Royal Australian Navy and the Kujawiak to the Polish Navy.

It is understood that the Hermione was torpedoed by an enemy submarine while returning to her base, and that the Nestor had been sunk by our own forces after she had been disabled in action with hostile aircraft.

Enemy losses on this occasion, it should be noted, included one Italian cruiser of 10,000 tons, two destroyers and a submarine sunk, a battleship seriously damaged, and at least 65 and probably 87 aircraft destroyed. We lost 30 aircraft.

In the United States the decision has been taken for the time being the construction of five huge battleships of 65,000 tons that were ordered last year, and concentrate upon building more aircraft-carriers. Six battle cruisers of about 27,000 tons, the Alaska, Guam, Hawaii, Philippines, Puerto Rico and Samoa, will be re-designed and completed as aircraft-carriers, as will a number of the 10,000-ton cruisers of the Cleveland class, 32 of which are being built.

In view of the important part which naval aircraft have played in the Pacific, there can be no doubt that this decision is a wise one.

Not only are the Axis Powers inferior to the Allies in the number of their capital ships, but the United States Navy already has ten new battleships approaching completion or well advanced in construction. These are the 45,000-ton Iowa, New Jersey, Missouri, Wisconsin, Illinois and Kentucky, and the 35,000-ton South Dakota, Massachusetts, Indiana and Alabama. With this margin of superiority in capital ships, it is far more urgent to complete additional aircraft-carriers with which to follow up the heavy blow dealt to the Japanese Navy off Midway Island early in June. It is now known that the enemy losses in that action included the aircraft-carriers Akagi and Kaga, both of 26,000 tons, Soryu and Hiryu, both 10,500 tons, Adding these to the destruction of the Ryukaku, of 20,000 tons, in the Coral Sea fighting, it is clear that Japan has been deprived of 60 per cent of her aircraft-carrier tonnage, without taking into consideration the heavy damage believed to have been inflicted on the Syokaku of 20,000 tons.

IN these circumstances it may be expected that arrangements will be made to build as rapidly as possible a considerable number of medium-sized aircraft-carriers , which would not only be completed in less time than bigger ships, but would involve a smaller loss of material and personnel if sunk.

At the same time, no doubt, every endeavour will be made to deliver at an early date aircraft-carriers of larger size already in hand, such as H.M.S. Implacable and Indefatigable, both of 23,000 tons, due for completion this year; and the 11 American ships of the Essex class, ordered in 1941, which are reported to be of about 25,000 tons. Quite a number of new merchantship hulls are known to have been converted into escort aircraft-carriers, for duty in convoy protection.

It is possible that in the not far distant future a new design of capital ship will be evolved, in which the strong protection of the present-day type of battleship will be combined with flight deck accommodation for a considerable number of aircraft, including torpedo bombers and fighters.

One more the importance of ample air support for naval forces operating in narrow waters has been emphasized. So far as can be gathered from the various accounts that have been published of last month

Since my last article was written, the outstanding event at sea has been the brief and abortive excursion into the Barents Sea of the German squadron from Trondheim, comprising the 40,000-ton battlesh

During the Crimean War, not quite ninety years ago, Sevastopol made history when for a year it withstood the assault of the combined armies of Britain, France and Turkey. Now a second siege of Sevast 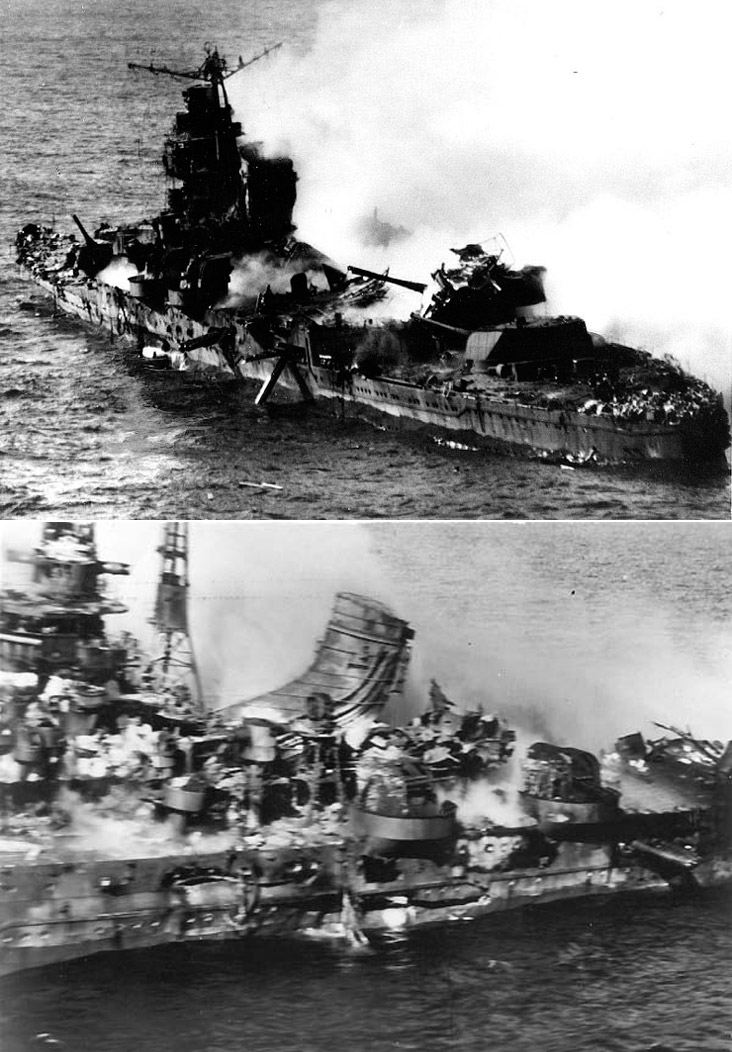 Japanese cruiser, of the Mogami class, after she had been bombed by American naval planes in the Battle of Midway island during the first week in June. (See pages 54 and 61.) Superstructures have be