No matter how long the war goes on (and that's a subject on which now that I am far more optimistic I find some of the early optimists taking longer views!) the story of Malta will retain its epic quality. One's admiration goes out to these splendid islanders for their endurance in the greatest test to which any community has ever been subjected in the whole course of history, not excepting their remote ancestors of Carthage in their three years' resistance to the Romans. Watching a newsreel last night which had been "shot" on board a ship of that great convoy which fought its way through the savage air, sea and undersea attack launched against it by the Axis, as the ship approached Valetta the picture of destruction that unfolded was terrific. Every one of these lovely old buildings that were steeped in history had been battered into shapeless ruin. It seemed hardly possible that human life could endure in such a shambles. But the inhabitants of the star city of the Crusaders -"a city built by gentlemen for gentlemen"- were proving worthy of the knights of old.

From no single spot of British overseas resistance have I had so many letters. THe most of my correspondents have been youths in their teens, who all write excellent idiomatic English, and display an enthusiasm for the British cause that is not outdone even in Britain itself. Although the Italian language and Italian names are common in Malta the local hatred of Italy is so intense that I have even had protests from my young readers there, whose own names are still Italian, because Italian names had been given to some places on the Island in a map I published, whereas these names had recently been discarded and others more English in form adopted! Although I have printed a number of extracts from my Malta correspondence, I have not been able to give more than a tiny part of the whole. One of Mr. Fabri's letters to me, recently to hand, resembled one of these lace-like patterns made by tearing newspaper, after it had passed the ordeal of the censor's scissors! But I am having some of Mr. Fabri's letters edited for a page in THE WAR ILLUSTRATED by piecing together the bits which the censor has left.

Meanwhile, that brilliant Maltese youth John Mizzi, from whose pen I've already given a number of interesting notes, has sent me many pages of manuscript about life in the Island, his latest letter coming to my desk only a few days ago after it had been just about three weeks on the way - pretty good postal work when it sometimes takes three days to get a letter from one part of rural England to another. Sometimes, note, but not often, though these delays do happen to me somehow. John Mizzi at sixteen has the makings of a very fine journalist. I know that at sixteen I could not have written so well; but in that far and tranquil past I didn't have matters of such moment to write about. The views of my young correspondent are no less interesting than his news, for they give a clue to what Maltese youth is thinking - and remember the total population of Malta is just about the same as that of Portsmouth: few but tough, obviously. In this last letter John Mizzi writes:

I have now received the parts of THE WAR ILLUSTRATED I asked for, and quite agree with what you said about the Navy. What a grand job they are doing! Had it not been for them I think the Empire would have been knocked out of the fight. The latest example of their work is arrival, through a blizzard of shells, bombs and torpedoes, of a convoy to Malta. You should have seen our planes, scores of fighters of every type, taking off to protect the convoy. Unfortunately the range at which fighters can operate is not enough to ensure protection through the whole passage. But when the ships were near Pantellaria, our fighters met them and were in time to pounce on a formation of forty bombers and force them to jettison their bombs before reaching the target. After that the enemy left the convoy alone.

A sailor to whom I spoke told me that it was "quite all right" while it lasted. When our fighters began to shoot down the enemy bombers, he said, with a grin, that they wanted to cheer but couldn't; the guns had to continue firing. He had been on a gun for four days, and he pulled up his sleeve to show me his arm. The sun had turned it red hot and dotted it with blisters.

We here knew before any other place of the mailing the Italian fleet had got in "its lake." We were elated. When the Germans get it in the neck we are relieved, but when the Italians get it we go crazy. And we are nearly always going crazy, too! We like to see them have it, to see their planes come down as balls of fire. Their navy is made of men without guts, men who only go out to sea when the ship's engines are tested to see whether they are still good after so much staying in port, and then they go and anchor again. The air force is made up of fighters not even able to match a Camel or an S.E.7. The pilots try to imitate the Germans with no slight trace of success. They think of their soldiers, so many of them now in India behind barbed wire! It's a good job Italy did not join us. We would then have to defend Italy as well as ourselves. I hope we in Malta will have a large share in knocking Italy out of the fight.

So that's the spirit that wins in the long run and can suffer until victory. I think that Malta has already done an incalculable service to Britain and the world in standing up to the most vicious attacks which the Hun and his henchmen could devise and after the victory its reward will come. I ought to mention that whenever the youngsters of Valetta go parading through the ruins left by the latest air raid they carry banners on which the favourite slogan is "Bomb Rome!" Many of us would like to know that the modern monstrosities of Italian architecture with which Mussolini has plastered Rome were reduced to equal ruin with its ancient remains: but that is a task hardly possible of achievement without still further ruining those most precious of ancient survivals. It would suit equally to smother towns like Milan and Turin or Genoa and Naples where the enemy has many of his War factories and little that matters of beauty or antiquity that need be spared. Anyway, I'd rather reserve for Musso and his fellow gangsters -all creatures of a meaner mould than their German masters- a stickier fate than going out under British bomb and blast. "Bomb Munich" is my own slogan and it is beyond my comprehension why we have kept our aerial blows away from the holy city of Nazidom. Some day it must be blasted and I wish we had a modern Cato to keep on calling for that job to be well and quickly done.

I was interested to receive some time ago a letter from Mr. C.J. Hindle of Oxford with regard to the use of the word Hun as applied to Germans. My readers may remember that I made no attempt to trace it farther back thank the notorious order of the late unlamented Kaiser to the German troops who were being sent to China at the time of the Boxer troubles; but it would appear from my correspondent that it has an earlier origin and the Kaiser was only using a suitable name for his soldiers, which will be found in Fransisque Sarcey's Le Siège de Paris, where he writes: "nous les (les Prussiens) appelions des Pandours, des Huns, des Vandales."

So it would seem that even the comparatively decent Germans (as we had supposed them to be) of seventy years ago had earned the description of Huns from the literary Frenchmen of that date, who were never at a loss for the right and pungent word.

Since paper economy became imperative I have personally made great use of old envelopes which have brought me bills and company reports. Indeed, many of my investments are yielding me no other dividend these days. Its astonishing how a bit of gummer paper folded over the slit edge of an envelope enables you to re-use it. Post Office returns show that only one in ten of the envelopes is an old one re-used. The percentage could be raised to at least two out of three and this is what it must come to, as only 15 per cent of the pre-War Supply is now permitted by the Paper Controller. 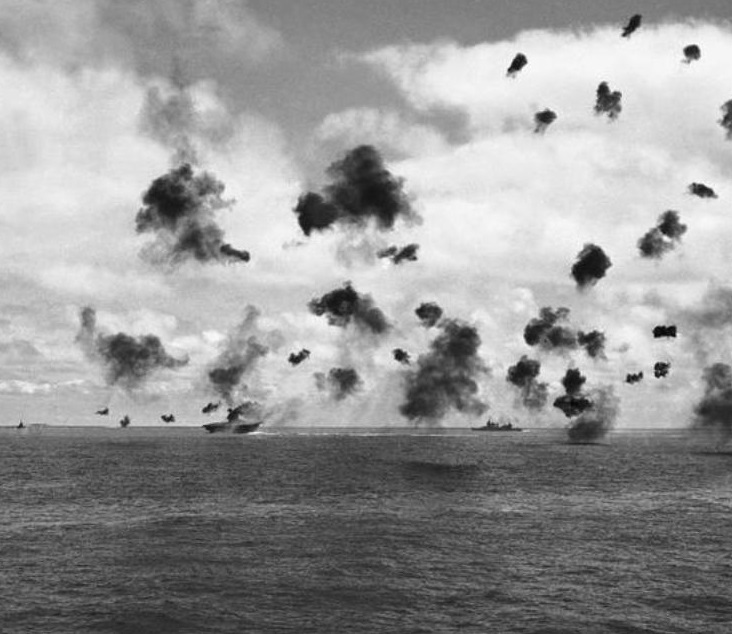 U.S. Aircraft-Carrier Yorktown and other fighting ships of the American Navy throw up a heavy screen of A.A. fire to beat off a squadron of Japanese torpedo-carrying planes during the Battle of Midw