An important Allied offensive was opened in the South-West Pacific on August 7. In the course of this operation strong forces of the United States Marine Corps were landed on certain of the islands of the Solomon group, including Guadalcanar and Tulagi, and according to the latest news available at the time of writing are now "well established" there. In support of these landings repeated air raids have been made on Japanese bases at Rabaul, Lae, Salamaua and Buna, as well as on more remote spots such as Timor and the Kei Islands, and enemy-occupied group in the Banda Sea.

Units of the main United States Pacific Fleet have recently been added to the navel forces already assigned to the South-West Pacific sector, which include both American and Australian warships. Substantial damage has been inflicted on the enemy naval and air forces, though details are not likely to be published until the operation has been concluded.

With the object of calming anxiety in Japan, the Tokyo authorities have issued the wildest claims of devastation inflicted on the Allied forces, culminating om a broadcast on August 15 asserting that 11 cruisers, six destroyers and ten transports had been sunk. Most of this destruction is alleged to have been accomplished by torpedo aircraft, 21 of which it is admitted were lost "by hurling themselves with headlong crashed on to the decks of warships". This is not the first time this particular story has been put forward. It originated with the Italians, who before the war began were fond of boasting that their airmen were prepared to sacrifice their lives in this spectacular fashion to make certain of achieving hits. Actually the only allied losses so far reported from official sources comprise one cruiser sunk, and two cruisers, two destroyers and one transport damaged  a modest total compared with enemy claims. The enemy lost 36 aircraft in the initial landing operations.

Washington stated on August 17 that the only engagement between surface forces was fought on the night of August 8-9, when an enemy force of cruisers and destroyers attempted to attack our transports, but was heavily repulsed. It had previously been explained that the immediate objective was to expel the Japanese from the Tulagi area and to make use of that region for Allied purposes. Evidently it had been the enemy's purpose to use it as a base for offensive operations against Allied positions covering the line of communications to Australia and New Zealand.

An initial surprise was effected, and though the enemy counter-attacked rapidly and with vigour, he failed to expel the landing parties. The great significance of the whole operation is that it marks the Allied assumption of the initiative against Japan. Previously it has always been the enemy who has done the attacking. Operations are under the immediate direction of Vice-Admiral Robert L. Ghormley, who until April was United States Naval Observer in London, and under the general control of Admiral Chester W. Nimitz, Commander-in-Chief of the U.S. Pacific Fleet.

The garrison of Malta, whose dauntless defence has excited such admiration throughout the Allied countries, had again been reinforced and supplied by an important convoy under the protection of the Royal Navy. In the escort were included battleships, aircraft carriers, cruisers, destroyers and minesweepers, which were called upon to beat off constant attacks by aircraft and U-boats. Italian cruisers and destroyers also approached from the Tyrrhenian Sea, but as soon as a striking force of aircraft assailed them they retreated without coming within range of our gunfire. One of our submarines, commanded by Lieut. A. C. G. Mars, R.N., succeeded in hitting two of the enemy cruisers (which included ships mounting both 8-inch and 6-inch guns) with torpedoes. Though there is no evidence that either was sunk, air reconnaissance showed that one had 60 ft. of her bows blown away.

Before this encounter was developed, H.M.S. Eagle, an aircraft carrier of 22,600 tons, was torpedoed by a U-boat and became a total loss, though luckily 930 of her officers and men were saved. The Eagle had an unusual history. Laid down on the Tyne in 1913 as the Chilean battleship Almirante Cochrane, she was acquired by the Admiralty during the last was and completed as an aircraft carrier. Her design was therefore somewhat obsolete, but in spite of the fact that her maximum speed was 24 knots and her complement of aircraft only 21, she has done good work in the present conflict. Some of her planes took part, with those of H.M.S. Illustrious, in the famous torpedo attack on the Italian fleet at Taranto on November 11, 1940; and on various occasions her aircraft have disposed of Italian destroyers and submarines with which they have been in action.

Regardless of the Eagle's loss, the convoy continued on its way and after hard fighting reached its destination. In addition to the Eagle our losses include H.M.S. Manchester, a cruiser of 9,400 tons, completed in 1938, H.M.S. Cairo, an old cruiser of 4,200 tons, re-armed for anti-aircraft escort duties, and H.M.S. Foresight, a destroyer of 1,350 tons. Two enemy submarines were destroyed and at least 66 aircraft (possibly 93), while we lost only eight.

Vice-Admiral E. N. Syfret, who was in command of the whole operation, has worthily maintained the high tradition established during the first twelve months of the war with Italy by Admiral Sir James Somerville, who will always be remembered for his famous order: "The convoy must go through". Rear-Adm. A. L. St. G. Lyster was in command of the aircraft carriers, and Rear-Adm. H. M. Burrough of the light forces.

In case it may be questioned whether the retention of Malta is worth the naval, mercantile and air losses which have had to be sustained to keep the island supplied, it may be pointed out that it is the only bastion on the northern flank of our Mediterranean front which the enemy had been unable to overcome.

Malta has served the threefold purpose of affording a base for the interception of enemy supplies to Libya by submarines and light craft; of providing an important intermediate stage for aircraft, and for air attacks on Axis sea communications and bases; and of constituting a miniature but most effective "second front", which has been the means of keeping large numbers of enemy aircraft away from other theatres of war. Altogether not less than 800 enemy planes have been destroyed in abortive assaults on the Maltese stronghold.

An American merchant vessel has been sunk by a surface raider in the South Atlantic. The raider is described as a heavily armed vessel of mercantile design and appearance, with an extensive fuel supply, resembling in her main features the notorious Altmark. Germany possesses several such ships, which were undoubtedly designed for this purpose.

It is clear that no raider can afford to make more than fleeting appearances upon the trade routes, the bulk of her time being perforce spent in unfrequented areas least she be sighted and run to earth. This necessarily sets a limit on the amount of destruction that she can accomplish in a given time.

Since my last article was written, the outstanding event at sea has been the brief and abortive excursion into the Barents Sea of the German squadron from Trondheim, comprising the 40,000-ton battlesh

I Was There! - We Picked Up Forty-Four Unhappy Italians

Here in a few words Petty Officer Nicholas Symmons tells of an incident that came to break the monotony of a spell of convoy duty. At a time when the menace of the U-boats is being stressed in Press a 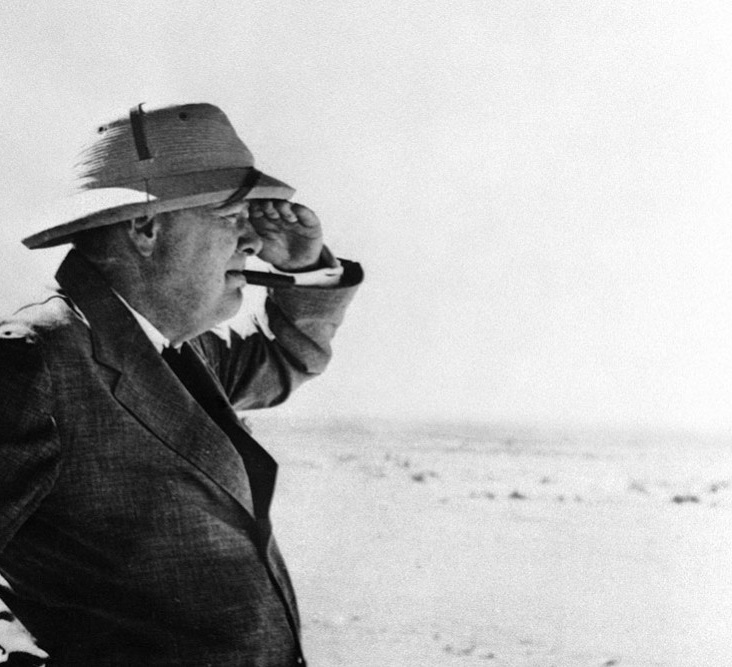 On his way to Moscow, and also on his return, Mr. Churchill called at Cairo, and in consultation with the political and military leaders reviewed the whole Middle East situation. The Premier also vi