To facilitate the landing of Allied assault troops at Oran the concrete boom across the harbour entrance had to be smashed and defences immobilized. The part H.M.S. Hartland played in this perilous action on Nov. 8, 1942, is described by two of her officers in the Reuter story below.

H.M.S. Hartland hit the breakwater outside the harbour on the first run in, but afterwards passed through to her scheduled spot under a hail of machine-gun fire, with one boiler out of action and liable to blow up at any moment. Lieut. Hickson said the plan was to take the Hartland to the most easterly jetty, at the head of which they found a French flotilla leader and a French tug.

As it was difficult to get the Hartland between the two ships the captain gave orders to get a wire on to the tug. The Frenchmen seemed rather to resent this, but we got a wire across to her and started to disembark what was left of the boarding parties and troops, British and American, among whom a lot of casualties had been caused by machine-gun and battery fire.

By this time the ship was on fire fore and aft, one side of the bridge had gone and she was liable to blow up at any moment. Just as we started the slow job the captain said "abandon ship". Everyone had lifebelts, and one by one they went over the side. Once ashore they were taken prisoner.

Even before we went into the harbour Commander Billot had been wounded. He was on his hands and knees when he took the ship alongside. He was also blinded in one eye. He had his shoulder smashed and a machine-gun bullet in his leg. Nevertheless he said, "I am going through". When we got alongside the jetty and were abandoning ship he refused to leave until he was convinced that every member of the crew, both wounded and unwounded was ashore.

Eventually he lowered himself over the side with his one sound arm and got into a rowing-boat with the idea of pulling out of the harbour and reaching a British ship outside, though he was obviously in need of medical attention. The French, however, picked him up in the harbour.

The attack was made just before 3 a.m. Lt. R. B. Bilborough, chief engineer of the Hartland said:

Almost straightaway we were hit in the boiler-room. All the fire and repair parties were knocked out. A moment later at almost full speed we hit the concrete breakwater. There was little hope that anyone could be alive in the boiler-room.

The ship was on fire almost entirely fore and aft. There was no further hope of saving the ship. Some got away by swimming a quarter of a mile to a floating dock. At about 7.30 a.m. on Sunday the Hartland blew up.

From above, the attack presented other features. To quote Lt. Hickson again:

Machine-gun fire was opened. It was extremely inaccurate, and we thought it was token resistance. Afterwards we found we were wrong. The Hartland was repeatedly hit. We were caught by a searchlight and became an easy target. At the jetty, which was our objective, a flotilla leader opened fire at us at 50 feet. Every shell hit us.

Recently arrived at a base in Britain after an 80,000 mile cruise, lasting two and a half years, in the Mediterranean, Indian Ocean and Java Sea, H.M. Submarine Truant has to her credit the sinking or 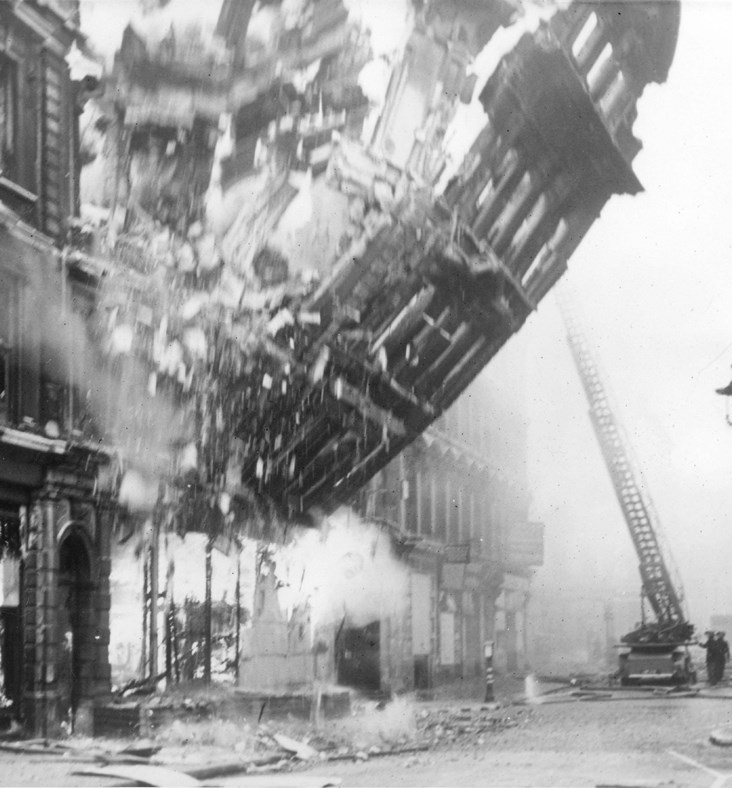 The Night of May 10, 1941 marked the climax of the Luftwaffe's prolonged and savage attack on the metropolis. Front Line, 1940-41, the official story of this grim period of the war (recently issued 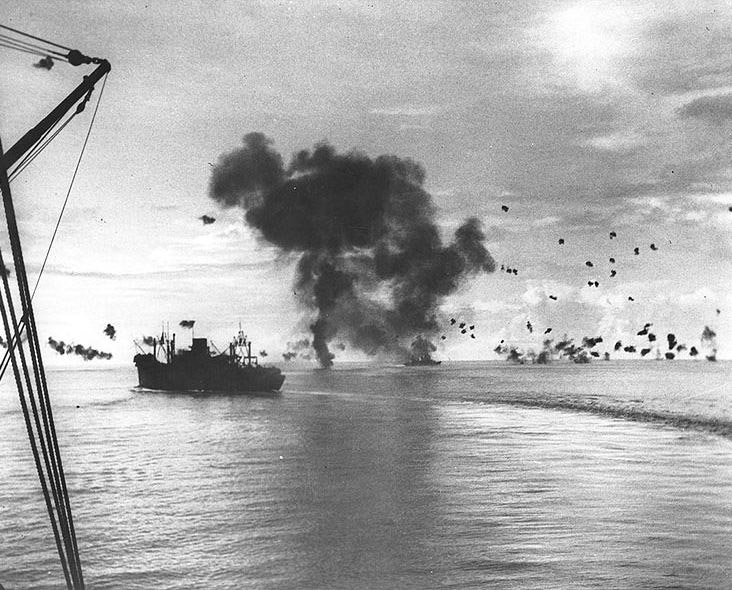 Fierce Battle off Guadalcanal. On Nov. 12, 1942 U.S. naval forces bombarded Japanese shore positions on this important island of the Solomons, and during these operations the enemy lost 30 out of 31