He Flew From 'Shangri-La' to Bomb Tokyo

Before very long Tokyo and other cities in the Japanese homeland will be feeling the weight of Allied air-power. But so far only one raid has been made on Tokyo  that led by "Daredevil" Doolittle, the subject of this article by CURTISS HAMILTON.

On an April morning of last year a small man, with shrewd eyes and going a little bald, walked along the deck of the U.S. aircraft-carrier Hornet for the start of the greatest adventure of his life. This man, now in his middle forties, had spent twenty-five years as test pilot and stunt flyer; this was his first combat operation. It was more than that; it was his own idea, conceived at the moment he heard of the Pearl Harbour attack four months earlier, and he was personally to lead the raid on the capital of Japan on April 18, 1942.

If he looked a little preoccupied it was because the Hornet, steaming within 800 miles of Tokyo and far from its base, had been spotted by enemy forces. Plans had had to be hurriedly changed and the take-off made 10 hours in advance. What was to have been a night raid was now to be a day raid, with a strong possibility that ground and air defences, warned by radios, would be in full operation. Maj. James Doolittle and the 80 men he had personally selected for this task were not worried about the danger. They were worried that they might be driven from their targets and that months of careful preparation and rehearsal might be spoiled.

The Hornet turned into the wind and the plane piloted by Major Doolittle flew from its deck, circling until it had been joined by the other bombers. Then, with the Hornet turning at full speed for its base, the bombers flew towards the Japanese capital. They went in low to escape observation.

How the bombs raining down not only on Tokyo, but also on Yokohama, Nagoya, Kobe, and Osaka brought the Japanese the greatest shock in their military history; how Doolittle and his men completely deceived the defences; and how 64 of them, after making forced landings because of the unexpected distance they had had to travel, reached the Chinese lines and found their way back to America  all this is now a matter of history. For a year the world knew no more than that U.S. planes had bombed Japan from a base which President Roosevelt called "Shangri-La" in playful allusion to the mythical country of James Hilton's novel, Lost Horizon.

Now it has been officially confirmed that the base was an aircraft-carrier, and that the planes were led by Major Doolittle, who for twenty-five years had astonished and thrilled the American public by his spectacular flying. As the whole daring and well-conceived plan was revealed, it became evident how well Major Doolittle deserved the Congressional Medal of Honour and the rank of Brigadier-General given him a month after the raid. It made him "American Hero No. 2", second only to General MacArthur in popularity with the public.

A few months later "Daredevil" Doolittle was in London on a mission, the nature of which the Axis was left to guess. Few recognized him at the West End hotel where he stayed, for indeed Doolittle bears little resemblance to the hatchet-faced, hawk-eyed air ace of fiction. Presently Axis curiosity was satisfied about Doolittle's mission. Hundreds of tons of bombs from 100 Fortresses fell on Naples in April last in the first attack made by U.S. planes on Europe form North Africa. They were under the command of Maj.-Gen. Doolittle.

U.S. planes followed that up with the first air raid on Rome, in full daylight on July 19, 1943, the North-West African Strategical Air Force  of which Maj.-Gen. James Doolittle is commanding general  combining with Middle East bases bombers to pound the carefully chosen military targets for 2½ hours. Of more than 500 planes which took part only five failed to return.

His bombers have operated in many different places, with only minor losses. On one occasion Doolittle himself had a narrow escape, the Flying Fortress in which he was travelling with a number of staff officers being attacked simultaneously by four enemy aircraft. The co-pilot was hit, and Doolittle took the place; and after two of the enemy planes had been damaged the Germans gave up the attack.

The success of Gen. Doolittle, who, as pilot go, is a veteran, is due to his unusual combination of talents. That he has courage, daring and boldness goes without saying. Since he went to North Africa he has been awarded the Silver Star, the third highest U.S. award for gallantry. But a general requires more than this. Doolittle is not only one of the most skilled pilots in the world in anything from a fighter to a multi-engined transport  he has set up world records in both  he is also a most careful planner, a man who realizes that all the courage and skill in the world are not enough without the most careful preparation. He does not hope for luck; but he courts it by overlooking no detail or possibility beforehand. It is a safe guess that the alternative plan of a daylight raid on Tokyo which was put into execution was no emergency make-do, but a scheme which had been as carefully rehearsed as the attack which the planes had been practising over American cities two months previously.

All through his long career as test-pilot and stunt flyer, Doolittle's preparations have equalled the daring of his conceptions. The public had heard only of his breath-taking flights across America and his daring pioneer blind landings in fog. They heard little of his "going back to school" for a refresher course before preparing for a record-breaking flight, or his rigorous physical self-discipline and training before attempting some new feat in blind-flying or altitude flying.

The bare facts of Doolittle's career which made him the hero of American civil aviation in the years between the wars are quickly told. He learned to fly in the last war, and was denied combat experience in France only because his skill made him so invaluable as an instructor that the authorities kept him in the U.S. With the coming of peace he turned to racing and record breaking. There were few important races he did not win, from the Schneider Trophy Race in 1925, when he beat the British, to the Bendix Trophy Race, when he became the first man to cross the U.S. in less than 12 hours.

Doolittle rejoined the U.S. Army Air Force before America entered the War, and was engaged in research when Pearl Harbour, which have America a shock, gave him an idea. The Tokyo raid was already in rehearsal in less than a month. It was his own idea, and he converted experts and chiefs in the services to his viewpoint that it was possible not only by his enthusiasm but also by hard facts and figures. The raid was not intended as a decisive military action, but as a "reply" to Pearl Harbour, a demonstration that the U.S. also had original ideas, as a "lift" for morale in the U.S. and an operation to keep the Japs guessing for months afterwards. After the raid Doolittle addressed a series of meetings of aircraft workers in California, and it is probable that his talks resulted in extra production more than equivalent to the number of planes lost (still secret) in the raid.

I Was There! - I Was One of the Nine Who Came Back

The closing scene in the glorious stand of the 155th Field Battery R.A. on Feb. 26, 1943, in Tunisia, was briefly described in page 77 of THE WAR ILLUSTRATED by one of the nine survivors who got back 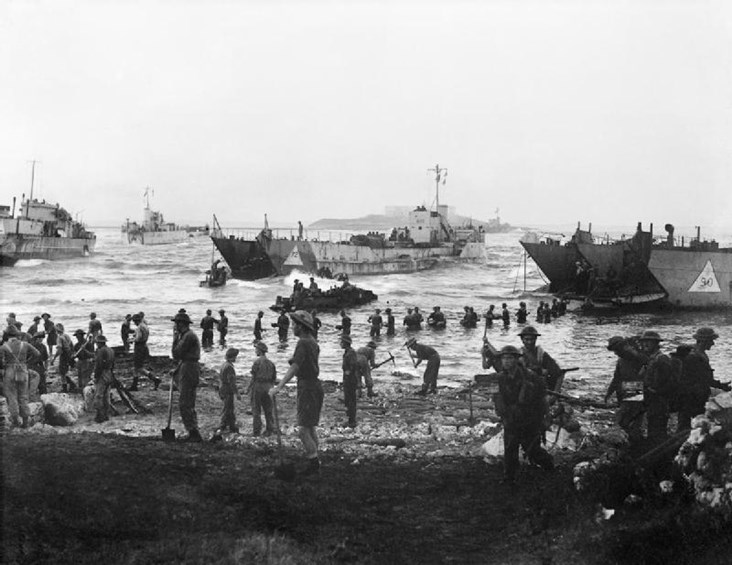 With Pick and Shovel the Way is Cleared. Our ships and men crowded the Sicilian beaches as dawn broke on July 10. Coastal batteries had been silenced and shore defences vanquished, and troops and na