Two recent actions off the Ushant shore were notable as being the first naval actions which ships of the Royal Canadian Navy have ever fought against enemy surface ships. This account of the passing of the gallant Athabaskan, set afire and torpedoed on April 29, 1944, is by a Naval correspondent who was aboard H.M.C.S. Haida.

We heard the cry, "Athabaskan has been hit!" and as we tuned to look at her we saw flames enveloping her superstructure. The action had hardly commenced. Two Canadian Tribal destroyers had discovered two enemy destroyers of the Elbing class close in on the French coast, and suspected others near by, and immediately closed to engage. Athabaskan (Lieut.-Cdr. J. H. Stubbs, D.S.O., R.C.N.) fired the first starshell, She was directly astern of Haide (Commander H. G. DeWolf, R.C.N.) and only a few cables distant.

Our guns opened immediately after, and under the spread of starshell we sighted the enemy ships, two of them, racing along the coast. They attempted to repeat the tactics of two nights previously, when we had sunk one and damaged three of their destroyers. They were making smoke and hoping to get away under cover of it. The action blazed furiously, and it was just after the first few salvos had been fired that Athabaskan was hit. It was a hazy, starlit night, about an hour and three-quarters before dawn.

We saw the flames spreading over Athabaskan but she steamed on, her guns thundering. Enemy starshell was all about us at the time, and shells were splashing around and between the two ships. Another shell seemed to strike Athabaskan aft, and she slowed down. H.M.C.S. Haide, her gunners repeating their fine performance of two nights previously, hammered the enemy ships, while Cdr. DeWolf ordered a smoke screen to shield Athabaskan, meanwhile maintaining the engagement. Hits were observed and a small fire broke out in the leading enemy destroyer and then, as we concentrated on the nearest one, we saw our salvos trike home and flames appear through the smoke screen.

It was about this time that a sudden explosion made us realize that Athabaskan had reached the end. We saw a burst of flames and knew our sister ship would sail no more. The odds were now more than two to one against Haida, but Cdr. DeWolf continued directing the engagement. Another salve and another struck the enemy ship, and the flames mounted higher. It was obvious that both enemy ships were confused. The burning one opened a vicious fire in the direction of the other, mistaking her apparently for us as she fled. As our target appeared stopped, we closed, pounding her as we came in, only to realize, as we saw the rocks, that she had been driven ashore out of control.

Haida then turned back to where we had last seen Athabaskan. Bobbing lights appeared on the surface as we closed the area, lights from the new type R.C.N. lifejacket. Nosing gently in to where the lights were thickest, Cdr. DeWolf stopped Haida and ordered all life rafts over and all boats lowered. The sea was covered with thick heavy fuel oil from Athabaskan's tanks. Those of Haida's crew who could be spared from the guns lined the rails, shouting encouragement to those in the water. "Come on, boys, this is Haida!" they cried, and the survivors, shouted back and blew whistles. They were covered with oil, and they slipped in our hands as we helped them over the side. Several of Haida's crew, including Mr. L. Jones, the Gunner (T), and Lieut. John Coates, R.C.N.V.R., went down the nets, accompanied by several Haida ratings, to help the survivors on board.

Up on the bridge the Captain, Cdr. DeWolf, leaned over and encouraged the swimmers steadily. "Come on, chaps, swim in to the ship's side!" he told them, and the survivors did so. One survivor coming in looked up and grinned. "Good old Haida", he said, "you beat us to it again", referring to the Elbing destroyer which Haida had intercepted and sunk in the previous fight two nights before. "We got the one that got you!" the Haida boys told him cheerfully.

The whaler was lowered and let go, and then the motor launch went down. Three of Haida's crew, knowing there was little hope that the ship could wait for them, did an amazingly brave thing very coolly. They got the motor-boat clear in record time, started up the engine and calmly proceeded to round up survivors who were too far away from the ship to reach it. It was less than half an hour to dawn. A lighthouse abeam of us on the French coast kept flashing steadily, and the shore was plainly visible less than three miles away. Reluctantly, Cdr. DeWolf gave the order to depart, and we went, leaving the gallant crew in the motor-boat to pick up as many as they could and utilize the whaler also. The motor-boat had fuel for six hours at a speed of ten knots. It had all necessary gear, including a compass and a Verey pistol. As we pulled clear, two of Haida's men who were down on the scramble nets were unable to get up, and they jumped clear. They were wearing the new lifejackets.

From a raft close alongside a voice, believed to be that of Lt.-Cdr. Stubbs, hero of North Atlantic actions against U-boats, was heard to shout, "Get away, Haida, get clear!" It was the kind of thing that this very brave and gallant gentleman who captained H.M.C.S. Athabaskan would say in such circumstances, though it left him, covered with oil on a drifting raft, to meet a cold, unfriendly dawn off the enemy coast.

I Was There! - We Struck at and Crippled the Mighty Tirpitz

In one of the aircraft carriers from which was launched the Fleet Air Arm attack on Germany's largest warship, on April 3, 1944, was Commander Anthony Kimmins, from whose broadcast of the action the f 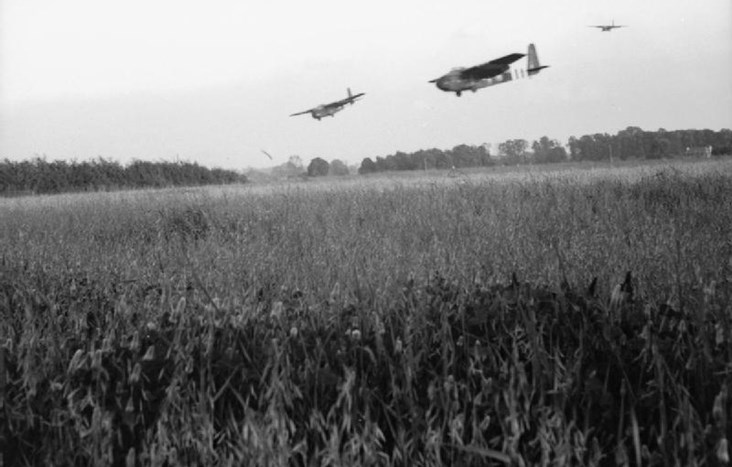 I Was There! - How We Smashed Into Western Europe

Our Colonies in the War: No. 8 - Sierra Leone

Important harbour is possessed by Freetown, capital of Sierra Leone, on the west coast of Africa. Ceded to Britain by the native chiefs in 1788, the colony, which now includes a large hinterland prote