There is no doubt the complete success of the Allied landings in Normandy on June 6, 1944, was due to thorough preparation and the use of overwhelming force. Lack of these two essentials had much to do with the very different results which attended the Gallipoli landings in 1915.

Our foes, on the other hand, tried to be strong everywhere, and thus failed miserably at the point where the attack was delivered. Their only hope of repelling the Allies was either to interrupt the expedition by sea, which they were not strong enough to do, or to beat back the troops as they attempted to land. It may now be asked, is there anything they can do by naval means to interfere with the steady progress of the invasion?

Before the landing hints were thrown out that the heavier ships of the German Navy were being kept in reserve for such an emergency; but this could hardly have applied to a landing in France, though it might just possible refer to one in Denmark, about which the enemy, as described in my last article (see No. 182, page 38), were extremely apprehensive. This becomes clear if the question is asked, where are the principal surface ships of the German Navy? Of its four battleships, the Bismarck and Scharnhorst are at the bottom of the sea, and the Tirpitz and Gneisenau are crippled, and could hardly have been made seaworthy in time to play any useful part in such operations. This leaves only ten ships of any importance, apart from the incomplete aircraft carriers Graf Zeppelin and Peter Strasser, the construction of which has evidently been abandoned. These ten are the pocket battleships Admiral Scheer and Lützow; the heavy cruisers Prinz Eugen and Admiral Hipper; the light cruisers Nürnberg, Leipzig, Köln and Emden; and the ancient coast defence ships Schlesien and Schleswig-Holstein. All are believed to be in Baltic ports, and their inactivity for many months past leads one to suspect that some, if not all, of them have been laid up, probably for lack of trained crews.

It is indeed beyond doubt that the German fleet must be acutely feeling the man-power shortage. U-boat casualties in the past eighteen months must have been appalling. For the whole of this time, drafts have had to be made on the complements of surface warships to make up fresh crews for new submarines. Nor have other naval losses been light. Two thousand officers and men went with the Bismarck, and some 1,500 more in the Scharnhorst. Destroyers, minesweepers, motor-torpedo-boats and other small craft are being sunk with increasing frequency, adding considerably to the toll. It is improbable that there is any considerable reserve of skilled naval ratings remaining. 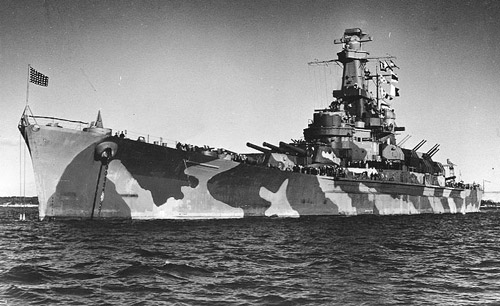 U.S. Battleship, Alabama, 35,000 tons, is seen here at anchor somewhere off an Allied base of operations. She is armed with nine 16-in. guns (in turrets of three), twenty 5-in. dual purpose, and sixteen 1.1-in. guns, as well as fifty 40-mm, and machine-guns. She is also equipped to carry and launch fighter aircraft by catapult. Her normal complement is 2,000 men. Belonging to the Washington class, she has five sister ships. Photo, Keystone.

It may be assumed that any enemy action at sea against the Allied invasion will now come from submarines. This was the experience in North Africa, but it did not in any way affect the issue. Since Allied naval forces are ready for such attacks, the slaughter of submarines if likely to be great.

A weapon capable of being used at night is the motor-torpedo-boat, or schnellboot, as the Germans call it. Commonly but incorrectly referred to in this country as the E-boat, this type of vessel depends for any success it may achieve on speed and stealth. In daylight it has no chance, being at the mercy of aircraft or destroyers; but at night it is impossible always to guard against it. Several of these enemy craft have been destroyed near the landing beaches.

Much of the most dangerous obstacle which our invading forces encountered was the minefield. This may consist of either magnetic, acoustic, contact or observation mines. Various methods of defence against the magnetic and acoustic types, or combinations of these, have been perfected, of which the best-known is the de-gaussing girdle encircling a ship. Contact mines can be dealt with by sweeping, or deflected by the paravane, special mine defence gear which is streamed from the bow of a ship. Observation mines, which are controlled from the shore and exploded electrically when a ship is seen to be in the field, may either by avoided or set off prematurely by counter-mining. All these dangers and difficulties were foreseen and provided for in the plans made for the Allied attack, no fewer than 200 minesweepers being included in the invasion fleet. Other ships that have been mentioned officially include the British battleships Nelson, Rodney, Warspite and Ramillies, and the U.S. battlefields Nevada, Texas and Arkansas, and smaller vessels.

One of the biggest difficulties under which our foes are labouring in Europe today is that of maintaining supplies, especially in the more distant countries which they still occupy. This has been well illustrated of late by the series of raids which the Fleet Air Arm has been carrying out on convoys proceeding up and down the Norwegian coast. Most of this traffic goes through the leads, the channels between the mainland and the fringe of islands which extends for the greater part of the distance from the North Cape to Stavanger. For a long time past these convoys had been suffering from intermittent attack by our submarines, as well as from bombing by Coastal Command and Bomber Command aircraft in the south.

Now that aircraft carriers are available in greater numbers, with longer-range fighters to protect the bombers, the Fleet Air Arm is coming more and more into the picture. In the past two months there have been six such attacks, including the one on the Tirpitz on April 3, 1944. These have taken a steady toll of merchant vessels, besides damaging escort vessels, so that there is a shortage of both. Escort vessels in Norwegian waters consist mostly of trawlers, minesweepers and miscellaneous auxiliaries. Not only are the losses in ships and cargoes hard to replace, but the enforcement of longer intervals between convoys in itself leads to shortage of supplies.

Conditions which the British naval personnel engaged in these raids have to face are severe. To carry out attacks through blinding snowstorms, with the prospect of dying of cold very quickly if shot down in icy water, calls for skill and courage of a high order. Flying off and landing on the decks of aircraft carriers, from which two feet of snow may first have to be cleared, is no job for a novice. Men who work on the slippery decks in the teeth of icy wind and snow deserve equal credit for the success of these expeditions.

Types of aircraft used in the Norwegian operations include the Barracuda, Corsair, Hellcat and Wildcat. The first-named can either dive-bomb or release torpedoes, as circumstances may dictate. The other three types (all American designs) can be used as fighter-bombers when necessary, and the effectiveness with which they meet any attempt by the Luftwaffe to interfere is most notable. On various occasions they have shot down Focke-Wulf and Messerschmitt machines. Ships from which these raids have been launched include the modern fleet aircraft carrier Victorious and her more antiquated consort, the Furious, together with the smaller American-built escort carriers Emperor, Fencer, Pursuer, Searcher and Striker.

Though certain of the details have still to be filled in, enough is now known of the Allies invasion of Normandy to make it plain that it is the greatest as well as the most successful combined oper 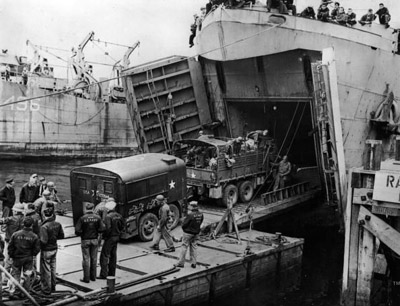 Ensuring food supplies for our fighting men about to embark on the liberation of Europe, one of many field-kitchens goes aboard a landing ship. Photos, British and U.S. Official; Keystone. Four y 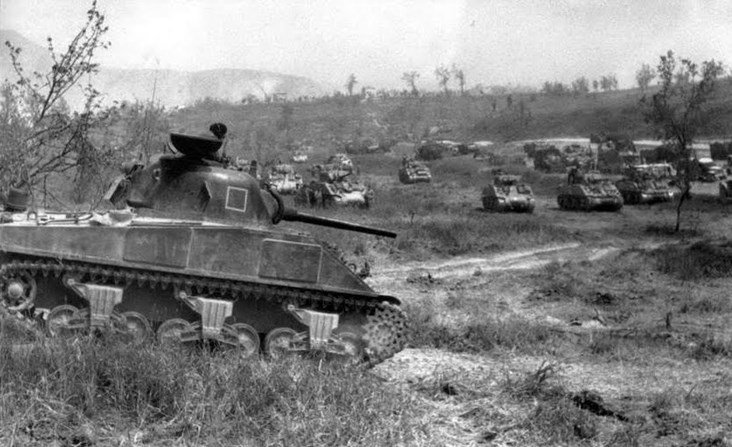 Moving up into Battle

Moving up into battle over the Cassino plain, massive Sherman tanks roll on to help smash the Germans at San Angelo, important village south of Cassino in the Gustav Line area. This photograph was t