I Was There! - We Pounded the Japanese Stronghold of Sabang

The crippling 35 minute surprise attack by Admiral Somervilles Eastern Fleet on July 25th, 1944, against the dockyard, harbour installations, wireless equipment and workshops at Sabang, the Japanese-held naval base in Sumatra at the entrance to the Straits of Malacca, is described here by Reuters correspondent Alan Humphreys, who was on board the flag ship.

At the rate of ten tons a minute, 350 tons of steel and high explosive struck Sabang in the 35 minutes the bombardment lasted. Battleships, cruisers and destroyers poured shells varying from 4-in to 15-in into the base at close range. When the flag ship turned away after completing her firing she was only two miles from the green, jungle hills which rise steeply from the sea around Sabang. It was the first time that any Allied naval surface force had been in sight of Sumatra since the dark days of the Japanese onrush in 1942.

The fleet reached its objective unobserved and the first thing the Japanese knew was intensive strafing by carrier-based Corsair fighters. Among the Corsairs targets were three airfields, including one at Kota Raja on the Sumatra mainland. Confirming suspicions that Japans air strength was weak, only four aircraft were found and all destroyed. Disturbing as was the air raid to serene Japanese slumbers, the first reaction of the defenders when they saw the powerful battles fleet closing in must have been one of extreme dismay.

The fleet was divided into five forces for the operation. The carriers with their escort stayed a considerable way out to sea. The aircraft went strafing, were ready to deal with any Japanese aircraft coming up, provided an umbrella over the warships and acted as spotters for the guns. Battleships made up another force. A third force which included Dutch warships penetrated the harbour and dealt with installations at Sabang. Two other forces were devoted to attacks on coastal targets east and west of Sabang.

Just before 6.55 a.m.zero hourthe loudspeakers announced : " Two minutes to go ! " An unusual silence developed, so that sounds normally unnoticed became insistent-the remote slap of spray, the faint hiss from the funnel, the bubbling whistle of wind in the wires just overhead. Then with a great belch of flame, a greater belch of orange-brown smoke, a blast of hot air and a jolt back on to the heels, the first salvo was fired from the big guns at a range of 17,000 yards.

A rating fired his own shot. "Share that lot amongst you ! " he said, as the guns roared. One by one resonant booms told that other battleships had joined in the bombardment. Then began the process described beforehand by a gunnery officer, of "inflicting the maximum damage in the minimum time." The particular target of the flag ship was the military barracks area, and in the words of the same gunnery officer, the Japanese garrison there was given " a new type of reveille in the form of a 15-in. brick. "

For the next quarter of an hour it was a rapid succession of jarring explosions. The force going into the harbour was firing furiously, one destroyer depressing a multiple pom-pom and spraying the defences with that also. Three Japanese batteries inside the harbour engaged these warships, a number of bursts throwing up gray gouts of water all round and close to them. On the run in, one battery was silenced the workshops and wharves were attacked, and a large crane was seen to topple over. Two batteries were silenced on the run back. The report on the operations conclude with the words "quite a skylark ! "

The remainder of the fleet carried out the bombardment unmolested. It appeared there were no coastal batteries. All the time a great cloud of smoke was steadily thickening over Sabang, a testimony to the weight and accuracy of the bombardment. The Japanese defenders, who made only the slightest reaction to the air attack, apparently nettled at last, whistled up their aircraft, possibly from Sumatra, possibly from Malaya.

Two hours after the fleet withdrew, a Japanese two-engined bomber was reported approaching. It was shot down by Corsairs. Shortly afterwards a Zero fighter found the fleet. He came in as close as ten miles then started to run home. He reported from 14 miles away, then 25, then 28. At this point the fighters cried "Tallyho !" and a moment later the Zero went into the sea 30 miles away. 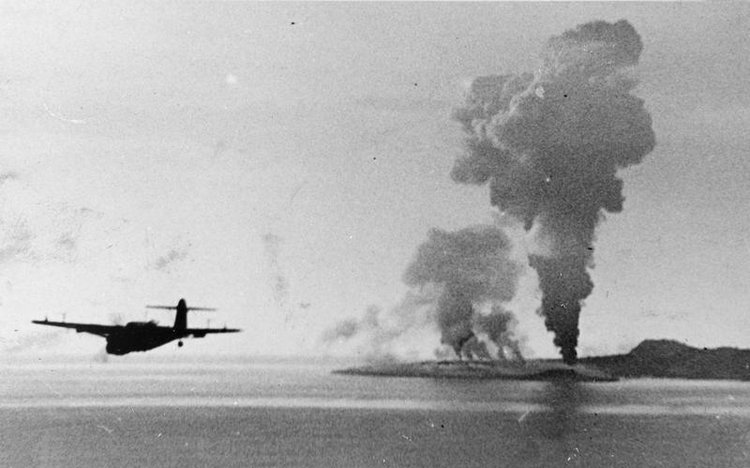 Japanese-held naval base at Sabang in Northern Sumatra was on July 25, 1944, subjected to a fierce bombardment by Allied warships and carrier-based aircraft, as told above. The photograph shows a Barracuda plane which took part in a previous attack on Sabang by the Eastern Fleet on April 19, leaving behind it columns of smoke rising from fires started there. Photo, British Official. 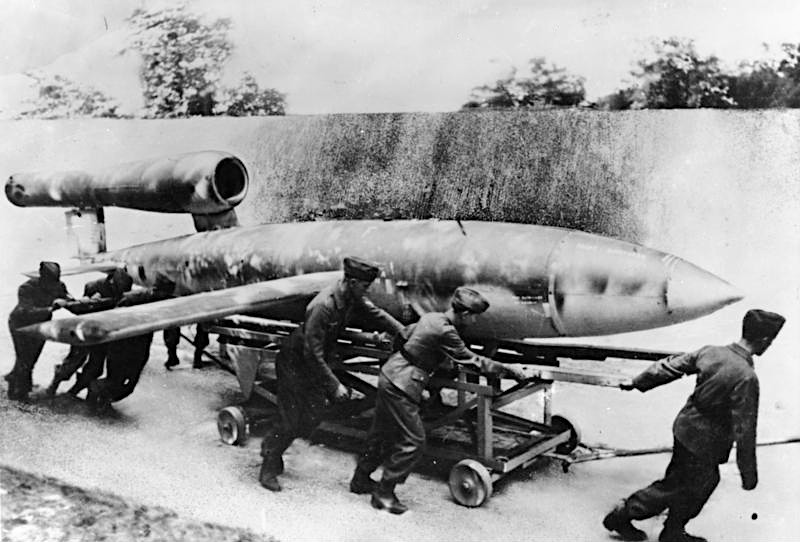 I Was There! - I Visited a Bombed-Out Flying-Bomb Site

Pointed at Bristol, bombed by Allied Air Forces into abandonment, a flying bomb installation at Martinvast, Normandy, has been inspected by war correspondent Peter Duffield. His story, and interview w

I Was There! - I Visited a Bombed-Out Flying-Bomb Site

Pointed at Bristol, bombed by Allied Air Forces into abandonment, a flying bomb installation at Martinvast, Normandy, has been inspected by war correspondent Peter Duffield. His story, and interview w 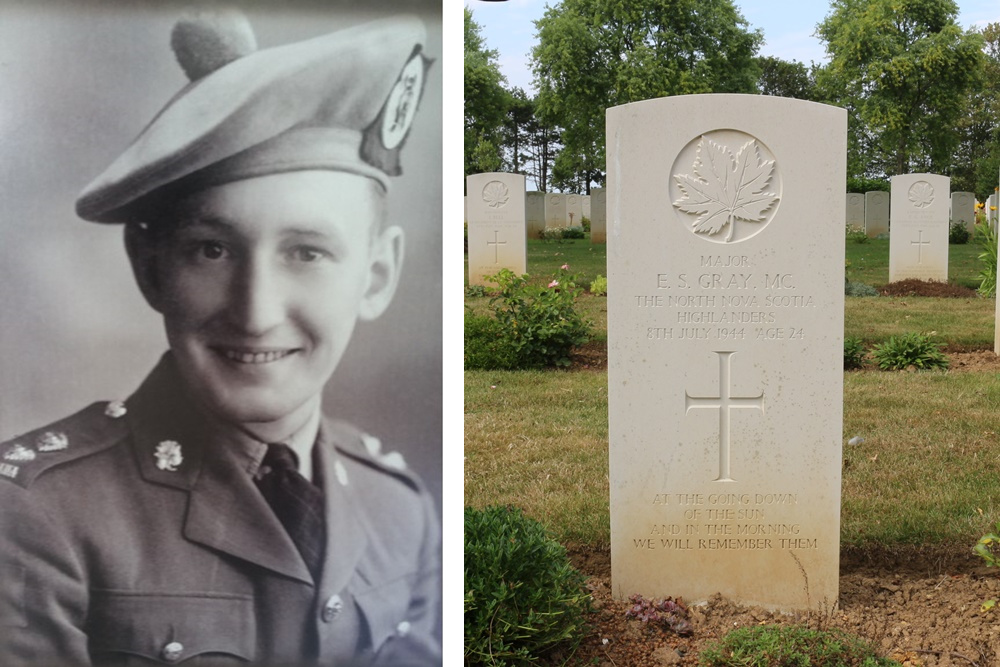