British, U.S. and French troops landed on the Riviera on August 15, 1944  and within a week 2,000 square miles of territory in the South of France had been liberated. Maurice Fagence of the Daily Herard, who was about the flagship, tells the story of the preliminary bombardment.

I have just seen the fourth front open in the chilly, misty hours of dawn. We were due to land our fist men at 8 a.m. At 8.51 I can write that they are pouring on to the beaches. At this early hour there seems astonishingly little response from the enemy. He may well be lying doggo, but I prefer to believe his coastal defences are either stunned or obliterated by the air-sea bombardment that is still shaking our flagship like a tin toy in a bath.

More than 1,000 Allied ships lurked in the offshore mists when over the loudspeakers came the warning: "Now, here it is", followed by a command that pinned the gunners to the guns and infantry to their stand-by points. American ears paid no undue attention to the first warning. It is the traditional preface to an American naval order, but to us British it sounded a well-chosen piece of Americanism to describe  what everybody engaged in this vast operation believes it to be  the last challenge to Hitler to find reserves to resist the grand assault that is going to finish the war.

Well, here it certainly is. Afloat in a sea aflame with orange fire and acrid with cordite fumes, and semi-stupefied by the roar of it all, I try to sort out my impressions. These ships around me assembled at a dozen different points in the Mediterranean to fox the enemy. For days and nights they steamed. Yesterday, when we were well knit into a monster fleet, Admiral Cunningham and General Maitland Wilson skidded around us in the fastest, slickest British destroyer afloat with the message that what we were going to do is destined to make history, and might prove the final blow to the enemy.

I talked on the bridge with the admiral commanding this particular naval force, which is concerned with the central part of a ten-mile front. "They've promised me bombardment by 1,300 bombers just before the attack, and they've even promised me bombs that make no dust", he said. The first sign of battle came from the enemy-held coast when a signal light hissed into the sky. We were still watching the spot when an American destroyer nearby spat smoke and a shell towards the coast.

British destroyers opened up just as vehemently, then more Americans joined in. Finally the great shadowy shapes of battleships, almost hidden in the mist farther out to sea, began to roar out broadsides. Destroyers sailed up saucily towards the shore and poured in close-range stuff. And those 1,300 bombers weighed in, giving us a close-up picture of what a Berlin bombing must look like. The bombers left, and it was the turn of the rocket ships. They threw sheets of fire that made even the oldest warhorses jump until the noise died down just in time to give our ear-drums a reprieve as the first wave of infantry went ashore.

It is now 9.15, and I hear the voices of beachmasters, calm, confident voices, telling what size boats can now get in with little difficulty. At 9.30 we ourselves ease towards that strangely quiet beach. An American tank lies wrecked on the beach, victim of a coastal mine which our rocket ships failed to detonate. A cloud of dust rises from where a small squat beach-house had stood. Some minutes before, the Germans opened fire from this house on a tiny British flak ship standing offshore.

So a destroyer butted in like a big brother. Just one blow and the column of dust shot up. From a hotel high on the coast that rises to some hundred feet inland a group emerges with a white flag. The weak response of the enemy is astonishing, inexplicable and welcome. As I hand over my message for transmission a hundred prisoners are coming down to our beaches and the seventh wave of our infantry leap from their barges. 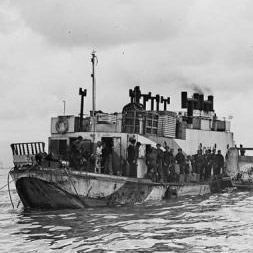 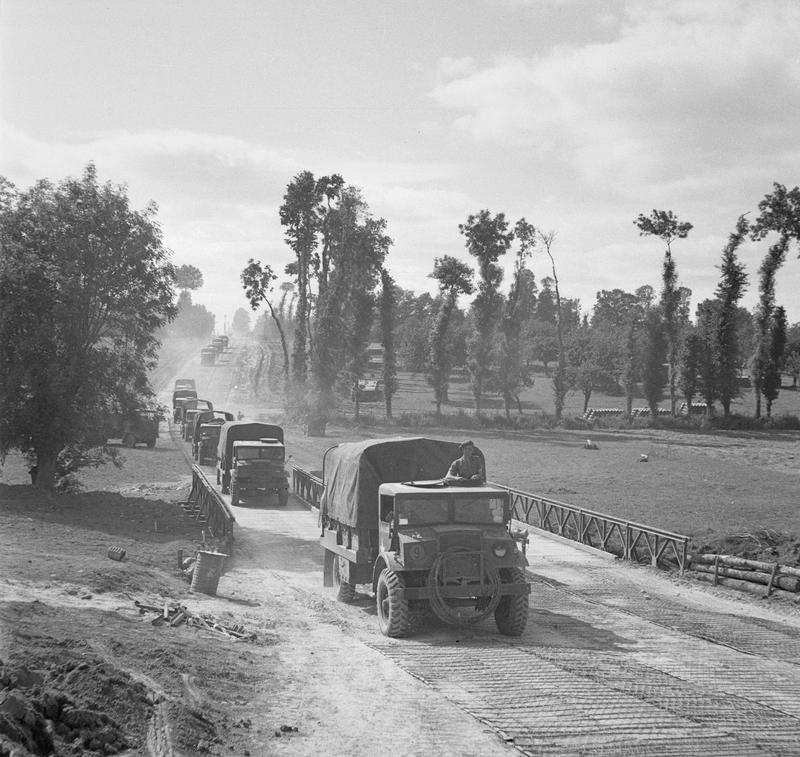 Bogged vehicles and grounded aircraft are millstones around the neck of an army; if its transport ceases to flow, offensive action becomes impossible and defence a matter of uncertainty. How perplexin