I Was There! - I Kicked My Captor Crashing Down a Hillside

Leaving the rest of his troop just as dusk was falling, to look at a tank which had been in difficulties during a battle the previous day, Capt. Law, a Tank Officer from Canada serving with a famous British cavalry regiment on the Burma front, relates how presence of mind and a ready boot transformed him from a prisoner to a free man.

As I made my way back darkness came on quickly, and before long I realized that the short-cut track I was following was taking me too far from the road. Suddenly, as I crossed a ridge on the way back to the road, I felt something pressed into my back and was aware of a small, aggressive figure behind me. Knowing that some Indian patrols were active in the area that night, I thought the man might be an Indian Sepoy, so I shouted in Urdu, It's all right, Johnny. I'm a tank man!

I was certainly surprised when I heard the guy behind me babble in some unknown tongue, and found his weapon  which turned out to be a knife  stuck closer into my back. Then, of course, I knew he was a Japanese. My captor was then joined by another Japanese  a huge fellow who had a rifle and an altogether unpleasant manner. As the pair marched me up the road I realized that they might shoot me as soon as they were clear of our patrolling area. Just as I was formulating some plans for escape, the big man suddenly hissed in a startled way to draw attention to some slight noises coming from the jungle. From that moment both the Japanese were definitely scared, for they seemed to know that our patrols were out in strength.

Reaching some cover, my captors indicated that I must lie low with them on the side of the hill. As one of them left the track, he slipped. I gave him a cracking kick and he went toppling down the hill, but not before he had stabbed me in the hand with his knife. With one Japanese doing involuntary ju-jitsu down the hillside and the other out of view for the moment, I ran for some undergrowth and, avoiding the road where our own patrol might have shot me at sight, made my way through the jungle to a safe hiding-place where I tried to plan how to get back. Taking a bearing on the sound of the British guns shelling a village, and guided by the North Star, I marched through the jungle all night until I met a British patrol making their morning brew of tea.

I Was There! - Singapore's Giant Floating Dock Was Our Target 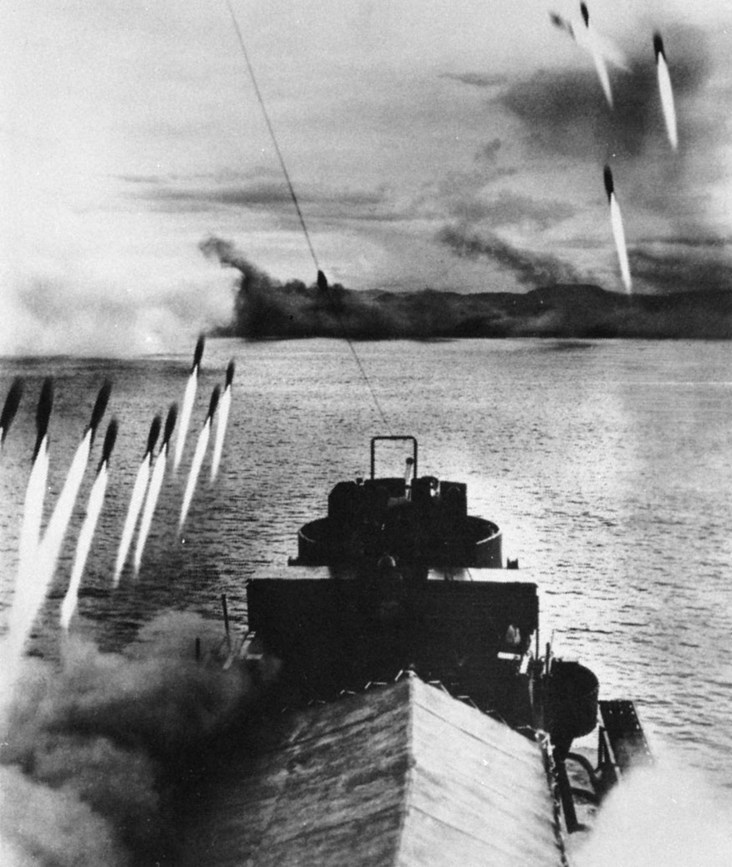 Intense Bombardment by Rocket-Firing Craft preceded the successful storming by U.S. troops under Gen. Walter Kreuger of Japanese-held Mindoro, one of the larger Philippine islands on December 15, 19